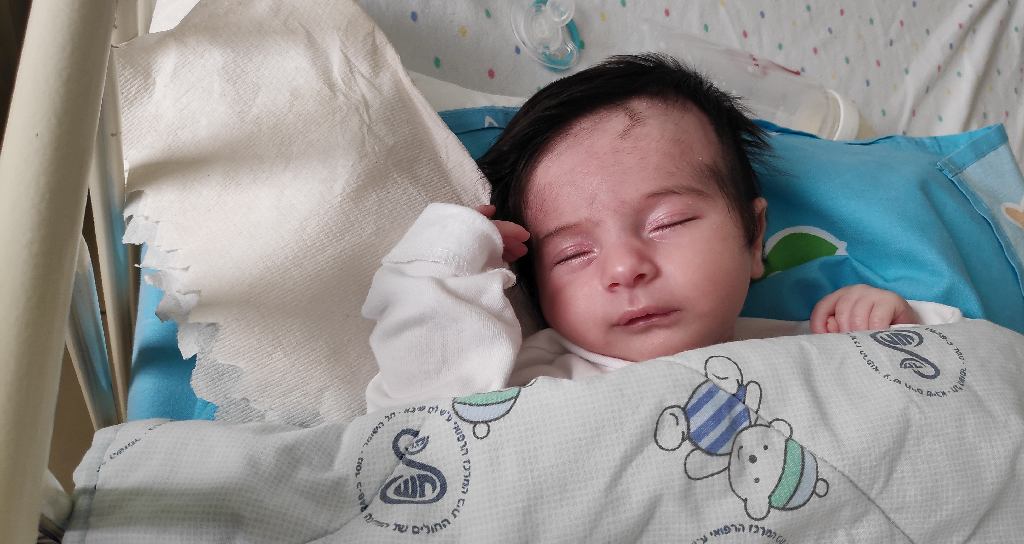 Today I had the privilege of helping with the discharge of little Adel from Sheba Hospital. I retured him and his lovely kind mother back to Gaza.  We had to wait for a long time for their discharge report. During this time I was able to hold the tiny Ahmed because his mother still had to pack some of her things.
Adel is such a lovely little boy. He was so light in my arms, it didn’t feel like I was holding him. His mother told me Adel is sleeping a lot during the day and it was the case today. He was asleep almost the whole time. Only when the nurse checked him, did he cry a little, but he calmed down really quickly when his mother gave him his tiny bottle of milk.
I love that this tiny boy already has so much hair. It looks so cute. His mother and I couldn’t stop smiling at him. He filled both our hearts with joy. His mother dressed him in new clothes for his return home, but the clothes were a bit too large on little Adel. We both couldn’t stop laughing about that. 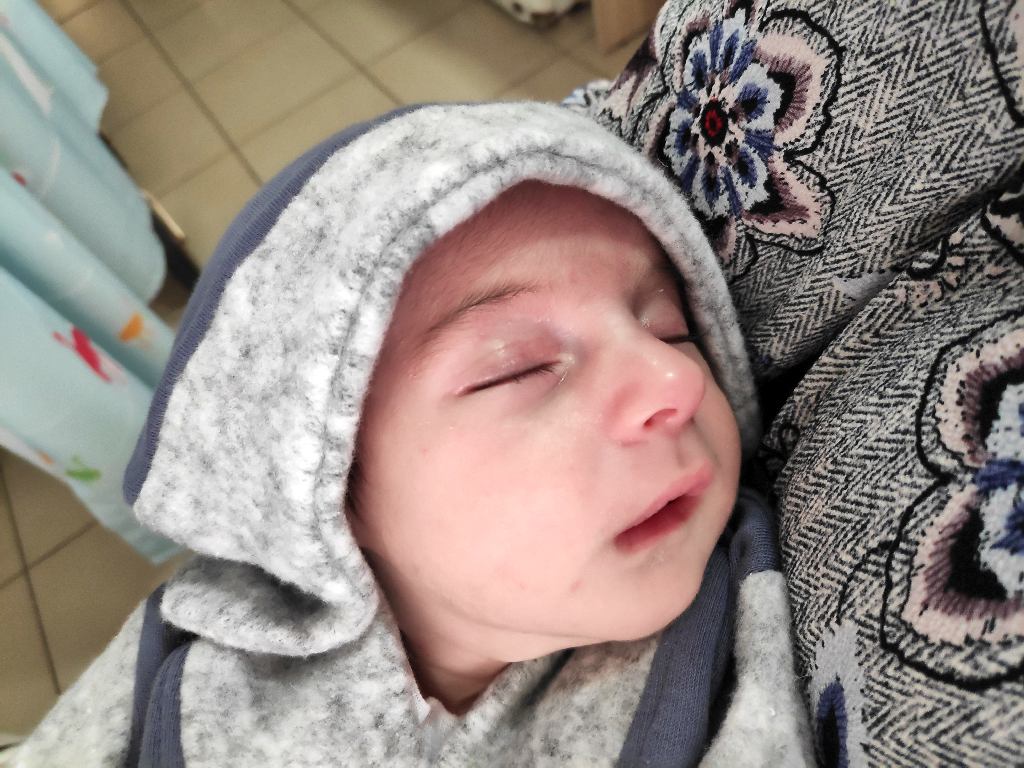 Adel’s mother was filled with thankfulness and joy as I brought her back to Gaza. She was looking forward to seeing her family.  She is a lovely, patient and kind woman. Co-worker Amar arranged that the Erez border crossing waited for them to go through. Thank God for connections like this.
Tiny Adel and his mother have to come back in one month for follow-up. Please join me in the prayer that until then, God will protect them.
Hide Comments Show Comments 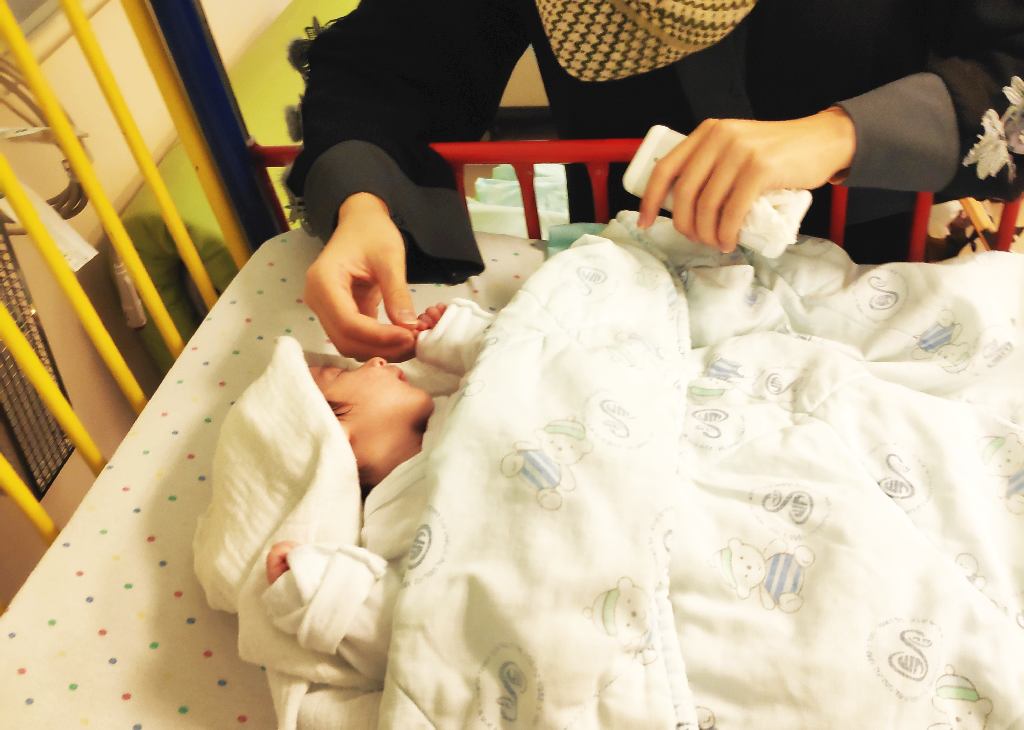 The Lord walks with us and always knows what we need before we know it. As often happens, today I was able to experience this again. Just as I was about to go to the ICU at Sheba Medical Center to visit our Shevet children, currently in the ward, Adel and his lovely mother came out of the ICU. The Lord put me in the right place at the right time.

Little Adel was transferred to the secondary ICU on the 4th floor today. I accompanied Adel’s mother there, and stayed with her for a while. This woman is a very calm and peaceful mother, as I noticed again today. She said that she is very thankful for everything the hospital and Shevet are doing for her and her lovely son.

She was at Adel’s side all the time, showing him her love. We both looked at her little son and I compared his little finger to mine. It is impressive that all of us have been that small once in their lifetime. One of his fingers can fit into mine probably ten times. Cute little boy.

Praise the Lord, little Adel was only in the ICU for two days after his surgery, and could already be transferred today. Thank you for your prayers for this family. You are very welcome to continue to pray for a good healing and recovery and that they will be able to leave the hospital soon. Lord willing. 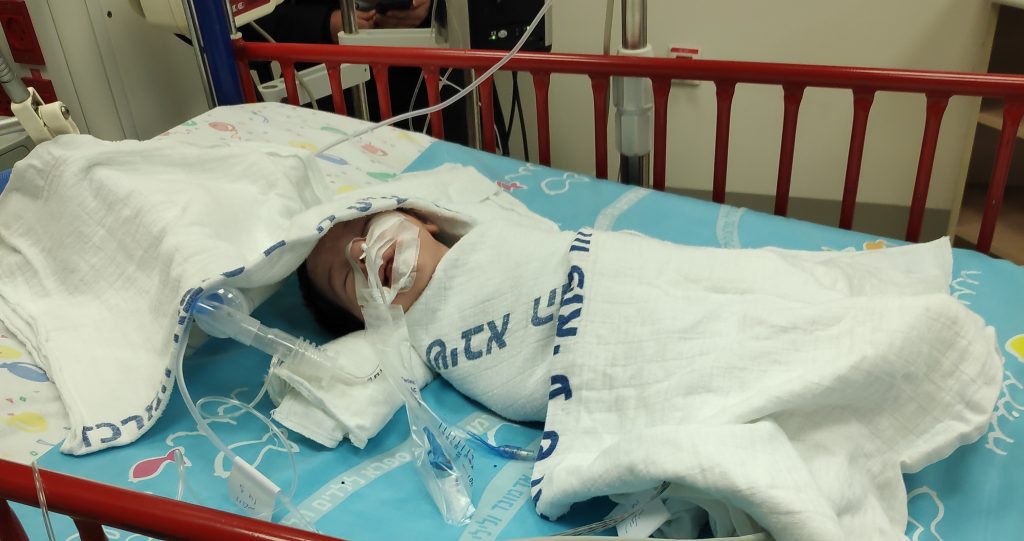 I went to the ICU today at Sheba Medical Center after the surgery of Adel was finished. Her mother greeted me with a happy smile and when I asked how the surgery went, she replied to me in English, “easy surgery.” The Lord blessed the doctors with a surgery that hadn’t had any complications.

I chatted with Adel’s mother for a while as well as I could. She speaks a little bit of English which makes it easier for me to communicate with her. I asked her how she learned to speak English, and she said a little bit from school and from speaking with people. She is a lovely woman with a lot of energy, and the few times that I’ve visited her now, she has been very happy. I asked her if Adel is her only child, but she told me that there is one other daughter waiting for her back in Gaza. I am impressed by her English sentences because they are constructed very well and it is always nice if our parents speak at least a little bit of English so that we can chat with them a little bit.

After a while I needed to leave her, so we hugged each other and I told her that I will pray for her and for Adel, that he will recover well from this surgery. Thank you for your prayer support. 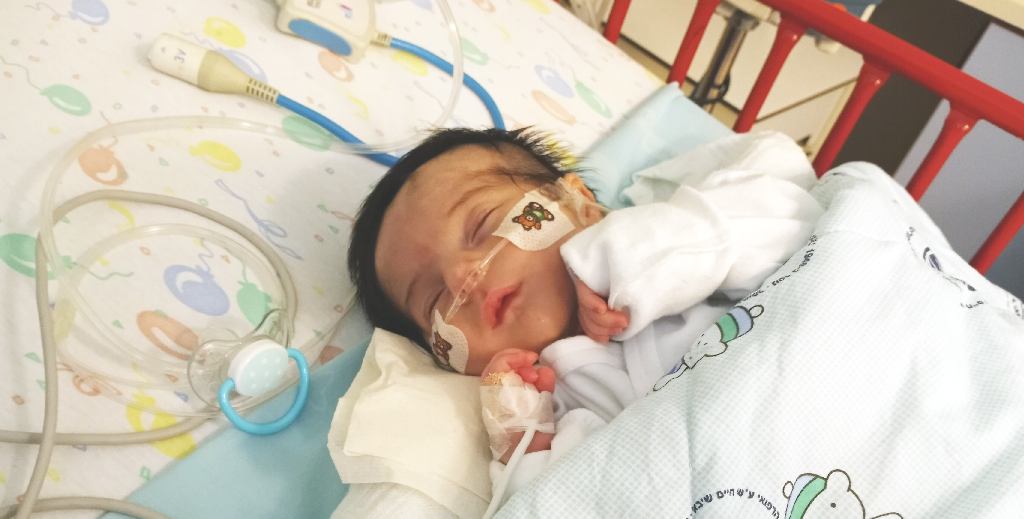 Baby Adel is still in the secondary pediatric ICU at Sheba hospital, as the staff works to try to find the reason that he is unable to be weaned off oxygen. He had an X-ray today which, God willing, will be able to shed some light on the cause.
Adel is eighteen days old today! His mother told me he has his nights and his days mixed up, so he sleeps in the day and is awake at night. This is a common phenomena  that I hear many of the mothers say in the hospital, but I think Adel’s mom was right when she said children in general are just like that with crazy sleep schedules.
It has become a bit of a tradition for Adel’s mother and I to go to the shopping center/food court area at Sheba and then sit outside for  a while afterwards. Many days at the hospital are very busy, but today was the perfect day to steal away for some time while Adel slept (as he does during the day).
At the food court she bought milkshakes for both me and her; this took me by surprise and I couldn’t express my gratitude enough! We sat outside under a tree in the late afternoon, drinking our milkshakes and intermittently talking about life in America. After some time had passed, she returned to Adel. I went to another part of the hospital, but this was so special as any time with little Adel and his mom always is wonderful.
Please continue to pray for Adel and his mom.
Hide Comments Show Comments 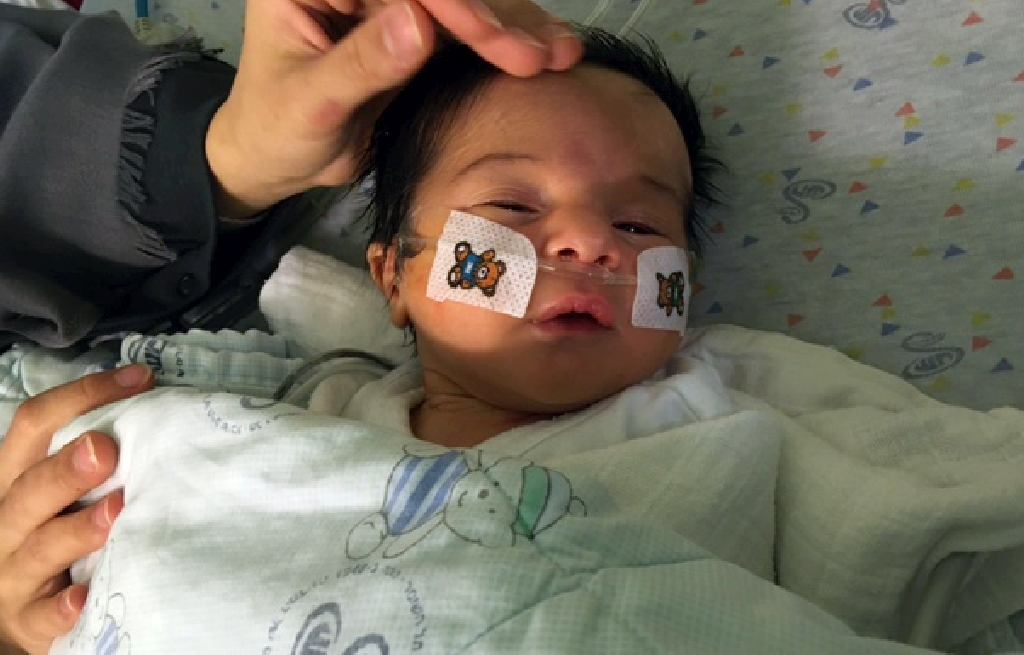 Today I was visiting our little boy Adel and his lovely mother in Sheba Hospital. I didn’t find them where they were the day before. An obliging nurse told me that Adel was not in the ICU anymore, that he was moved to the secondary ICU on the fourth floor, which can be interpreted that our Adel has seen improvement. What a blessing for this baby boy!

I found Adel peacefully sleeping in his bed. I could see on the monitor that his vital signs were good, his condition stable. He still neeeds  oxygen support. His lovely mother hopes he will get better soon. She is always on his side.

Thank you so much for all your prayers! We are so thankful for what God’s doing in Adel’s life. 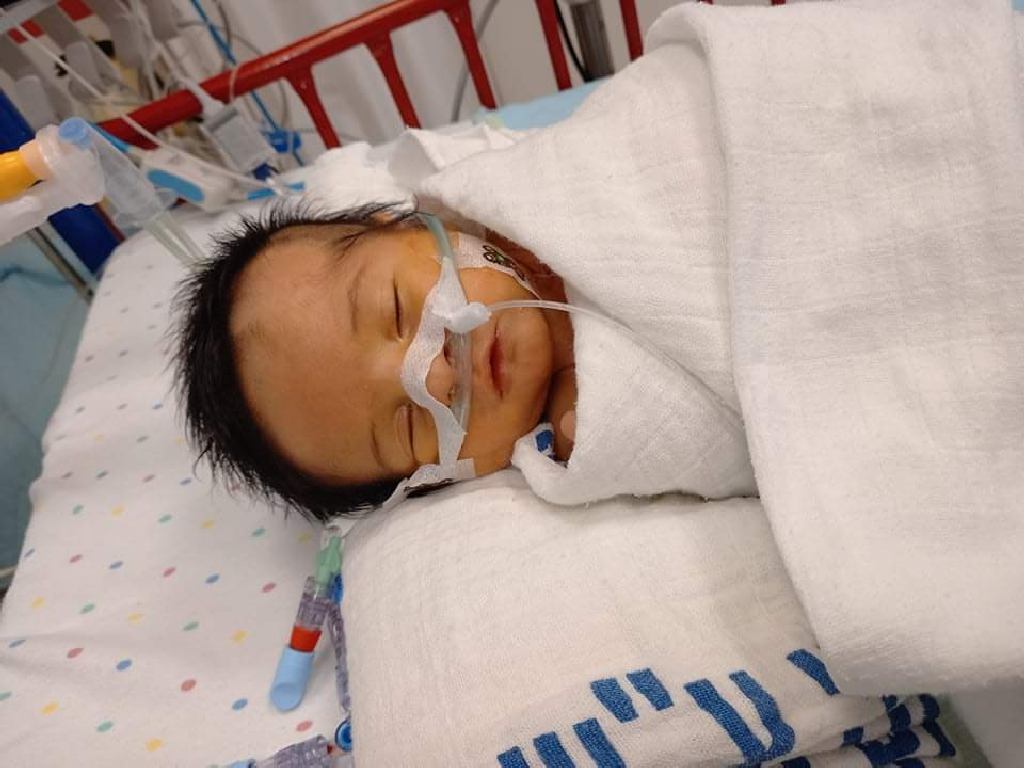 Sweet Adel was extubated today after his surgery last Thursday! Co-worker Carina and I saw both him and his beautiful mother today. She was tired but thankful for his progress.

May his body adjust to breathing without mechanical ventilation and in time, breathe without any oxygen support. Thank you God for Adel’s life. 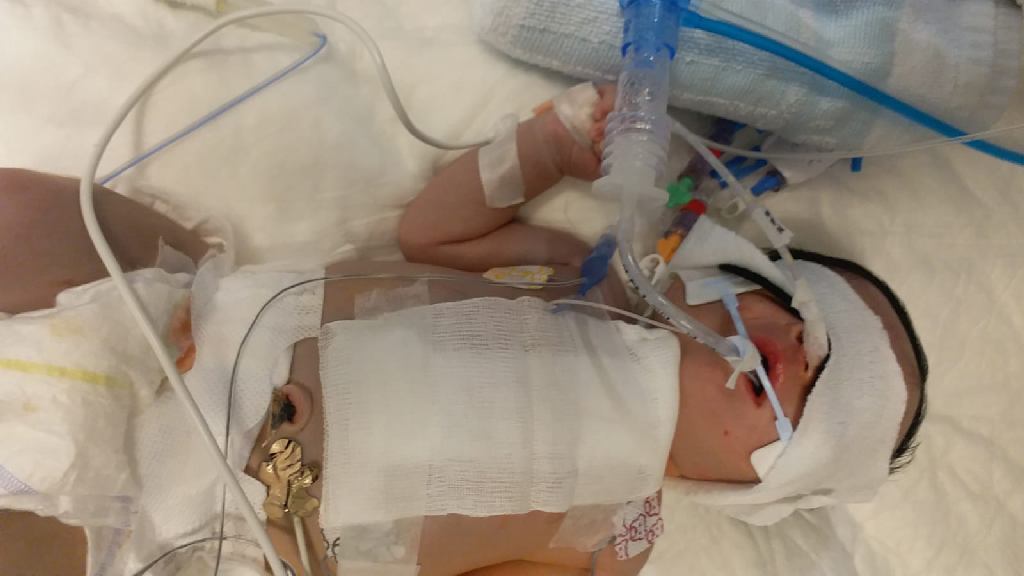 The Sheba Pediatric ICU told us today that they wanted to extubate our little Adel, but it was not possible for them to do this yet. They are planning to give it a go in the next few days.

Thank God that so far, Adel is recovering quite quickly and nicely, but please continue to keep this little boy and his lovely mom in your prayers and that they can extubate cute Adel soon. 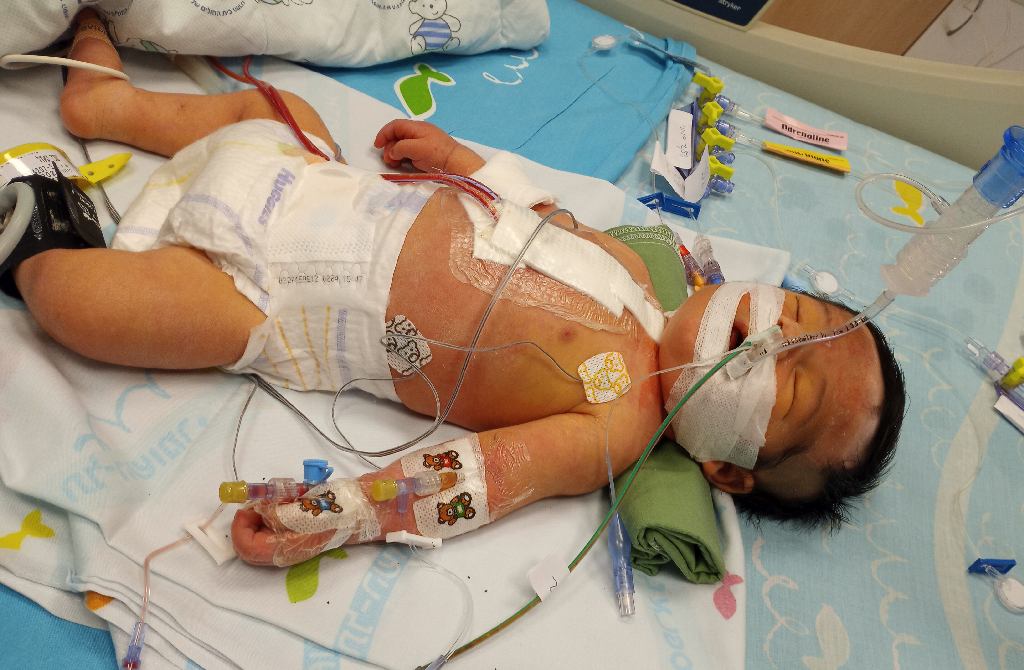 As I stepped out of the elevator at Sheba Hospital today, I very nearly collided with Adel’s mother. She was just coming out of the operating area where Adel was taken. We hugged and went to sit down togetherin the waitimg area.

For the first hour of our wait, there was another family from Hebron there whose son was having a catheterization later today. They encouraged Adel’s mother not to be fearful, that they treat transposing of the great arteries a lot here, and that the doctors are very good. It was clear that this family from Hebron knew exactly how Adel’s mum was feeling. The question that brought tears to her eyes was when they asked how old her son was. Five days, she said.

Eventually they went back to their room and Adel’s mother and I went outside. The Sheba supermarket we visited two days ago we frequented again today. We ate chocolate biscuits outside under a tree. We considered them breakfast as neither of us had eaten a meal yet.

Adel’s mother is quiet and gentle, which I really love about her. She asked if I had studied at university and said that she hopes to attend school again and study English. I loved her response and told her that yes I studied history and it is very important for women to go to university, so I hope she does attend one someday when her son is a little older. We spent an hour chatting outside before going back into the children’s hospital. Her cousin who lives in Israel, came to the hospital to be with her. This was the first time in seven years that they had seen one another. 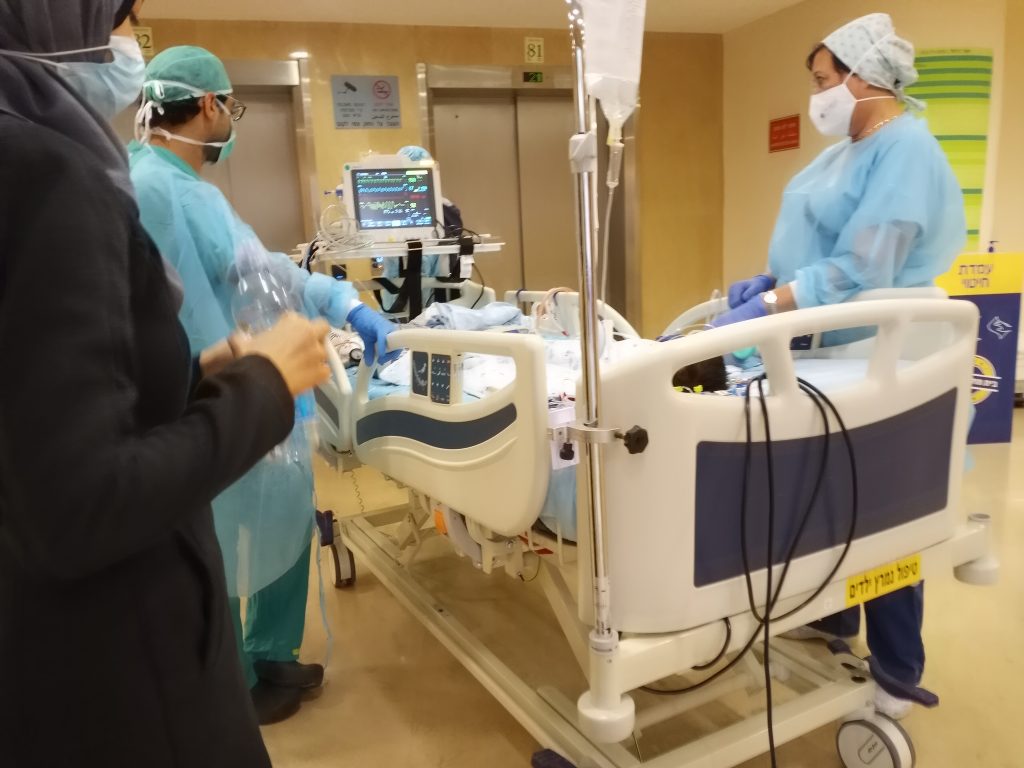 At around half past noon, Adel came out of surgery with the best news. The surgery, called an arterial switch, was successful.

Please pray for this sweet, five day old boy as his body adjusts to the operation. May God bring healing and growth to little Adel. 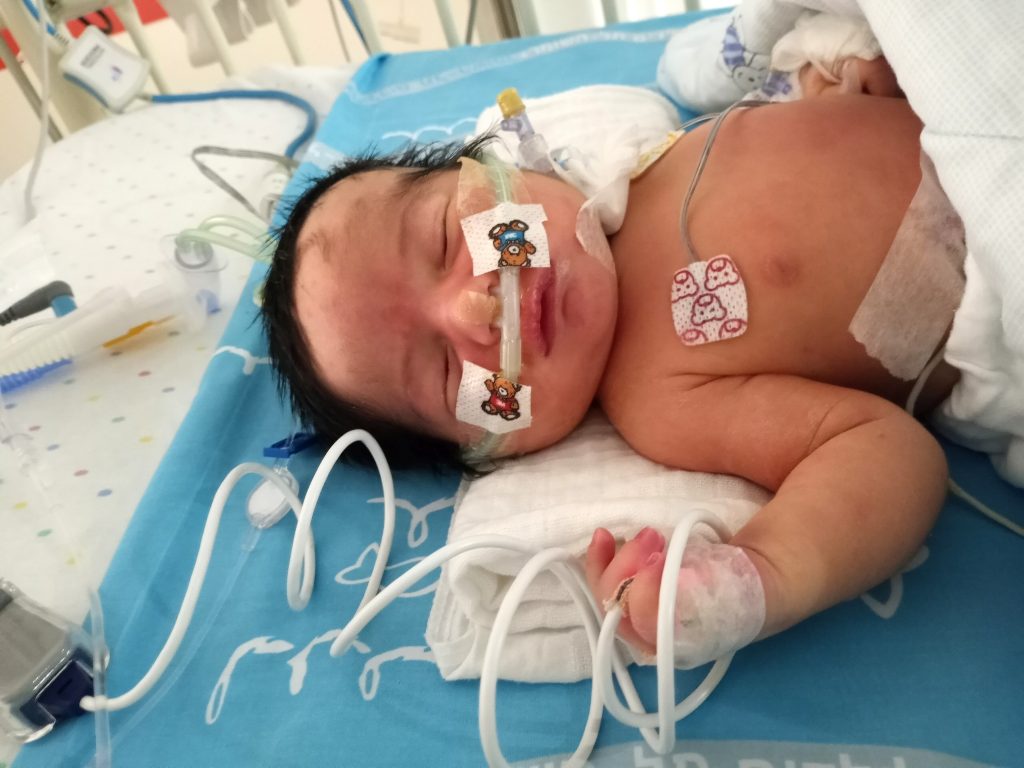 As we sat outside Sheba Hospital together with another mother, Adel’s mum took a few deep breaths of the fresh air. “His surgery is on Thursday,” she said very calmly and evenly, though she had begun to cry. Earlier we had gone to the hospital’s shopping center, and she had been drawn to items that would make good presents for her one and a half year old daughter. She was thinking of them both.

Her husband called her during this time and asked if she could use my phone to send him pictures of his son as her phone doesn’t have a camera. She explained that Adel’s dad never really saw his son; it has been only three days since he was born, and before he came to Sheba yesterday, he was in the ICU in a Gaza hospital. It all happened so fast, his mother said.

Please pray for their whole family who now find themselves apart; may our God bless Adel’s life and his surgery on Thursday. 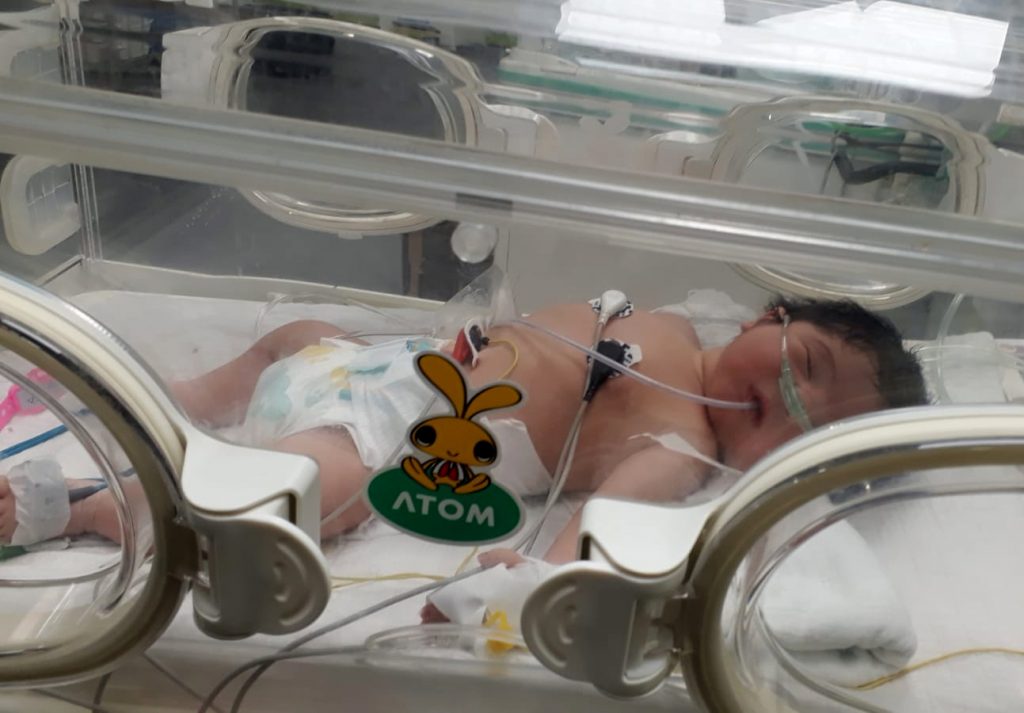 Newborn Adel was blue at birth and doctors in Gaza quickly discovered that the great arteries of his heart are switched from the natural position, and therefore pumping blue rather than red blood out to the body.

Our Gaza coordinator Amar, and the team at the Sheba Medical Center, acted immediately to bring Adel to Israel, and he reached the Sheba ICU this evening for stabilization and assessment. 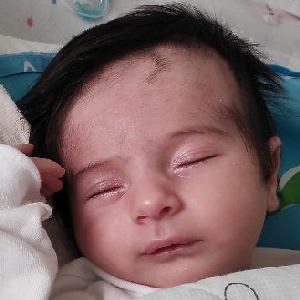 Adel is a days old child from the Gaza Strip diagnosed with transposition of the great arteries.

Adel does not yet have a local leader to advocate for prayer and financial support for his surgery.

As of right now, Adel still needs $6000 toward surgery and related expenses.