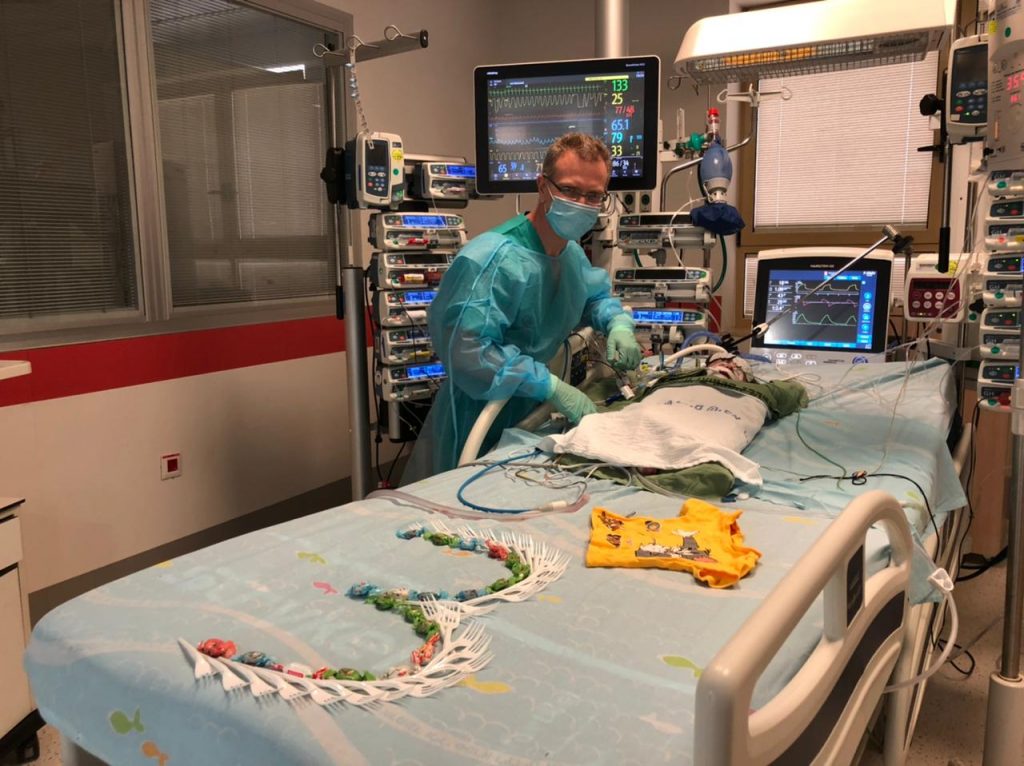 Ayan’s mother sent photographs today to excitedly mark his “3rd month birthday!” Although probably it’s not the third month celebration any new mother would ever be imagining. Nevertheless, Ayan’s mother is delighted that he turned three months old despite a prognosis when he was born that looked to be so bad. 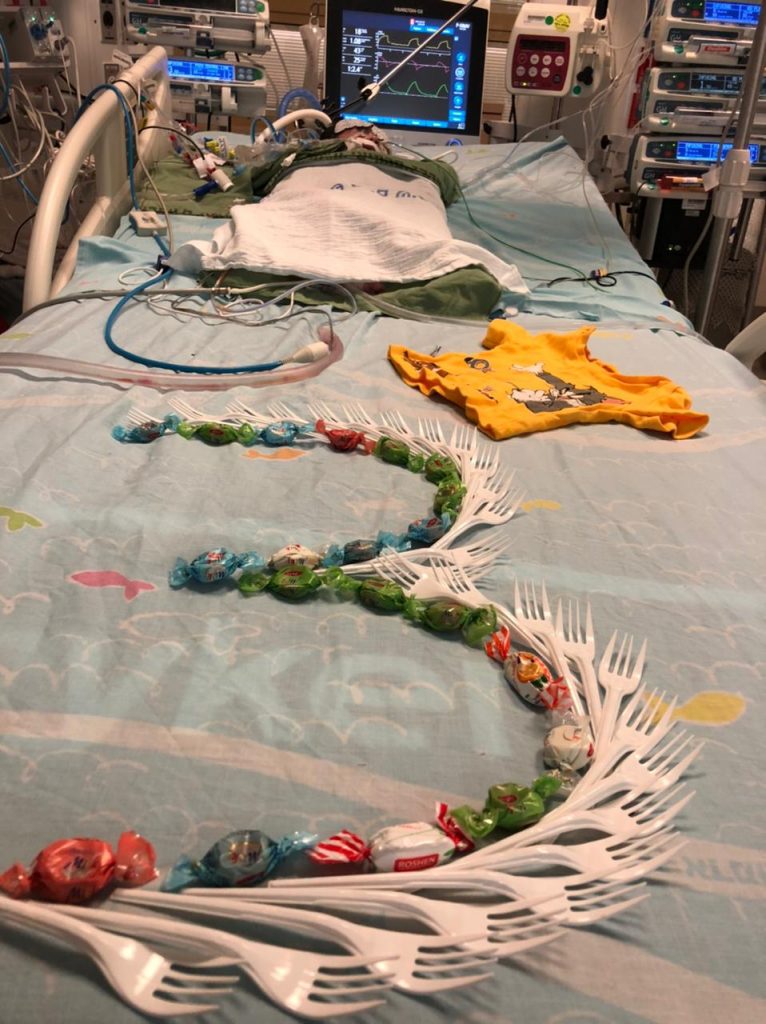 Ayan’s mum has been his mother for three months. I asked if she misses holding him, as he remains with his chest open in the ICU, to which she replied yes. But she pointed out the chair next to his bed, and said that she sometimes sits on that chair and holds onto his little foot. 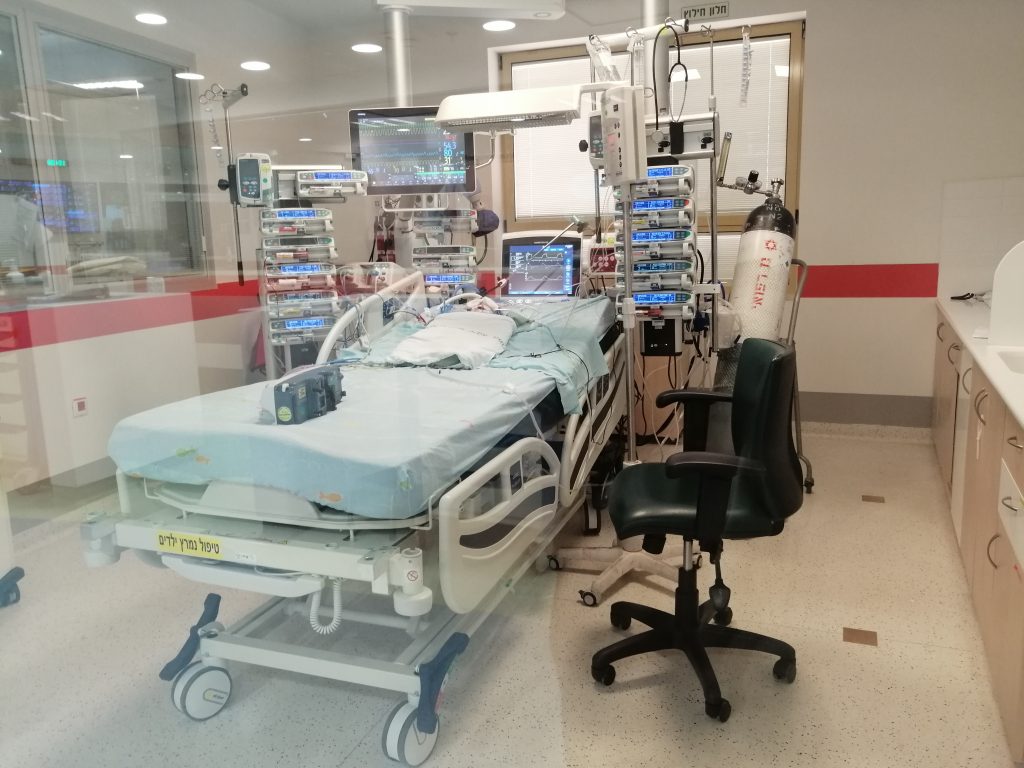 Ayan’s condition remains the same; we continue to pray and wait for the next surgery.
Hide Comments Show Comments

Ayan’s mother had a scare earlier at Sheba hospital today, which involved many medical staff rushing into the room, and she was asked to leave. It turned out that the intubation had become dislodged and he required to be reintubated. She breathed in relief to realise that it had not been a deterioration in Ayan’s condition causing the dramatic scene.
We heard that he has Pneumonia, and needs to recover from this before the surgery. The daily echo showed that his left ventricle is also not yet ready for the big switch surgery, so it looks to be a few more days before the second surgery for Ayan. His chest is open,  so it’s not recommended for visitors to enter the room.
His mum was happy to know that he is overall in a reasonable recovery, and that still the idea and hope is that he could have the next surgery in the coming days. She turned all of her attention then to another Kurdish mum in hospital concerned after her own child also. It’s beautiful to see the mothers supporting each other.
Please continue to pray for Ayan’s recovery.
Hide Comments Show Comments 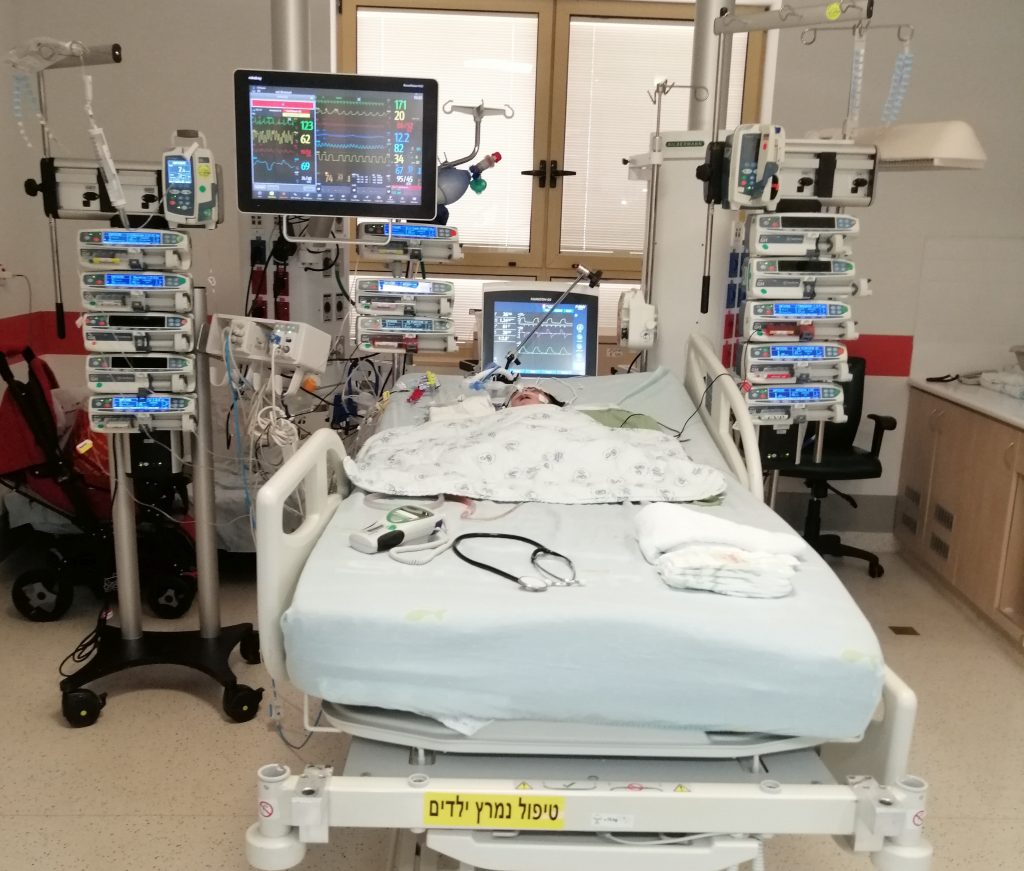 Ayan’s mother asked today for some help in understanding the condition of her son. She speaks and understands English very well, but with the stress of the situation and lots of new medical words, I think it’s helpful to her for us to ask the doctors for Ayan’s condition. Her English is miles better than my Kurdish, and she is a thoughtful and intelligent lady. Somehow we seem to be working nicely to understand together, and each other.

We were told by the doctor today that Ayan’s chest remains open and they intend for it to stay this way until his next surgery. Thankfully he is improving from how he was on the day of the surgery last week, and they have been able to reduce some of the medications supporting him. Still, this recovery has been hard for Ayan in comparison to a few of the other babies with the same condition and same surgery as Ayan who are there in the ICU at the moment.

Ayan’s mother was pleased to hear that he is a little better. She seemed to be able to push her disappointment to the side – that he will not have the chest closed – and turn her attention to supporting her friend, another Kurdish mother,  whose baby was in surgery today.

We look forward to the next step for Ayan, and trust that he is safely in God’s hands. 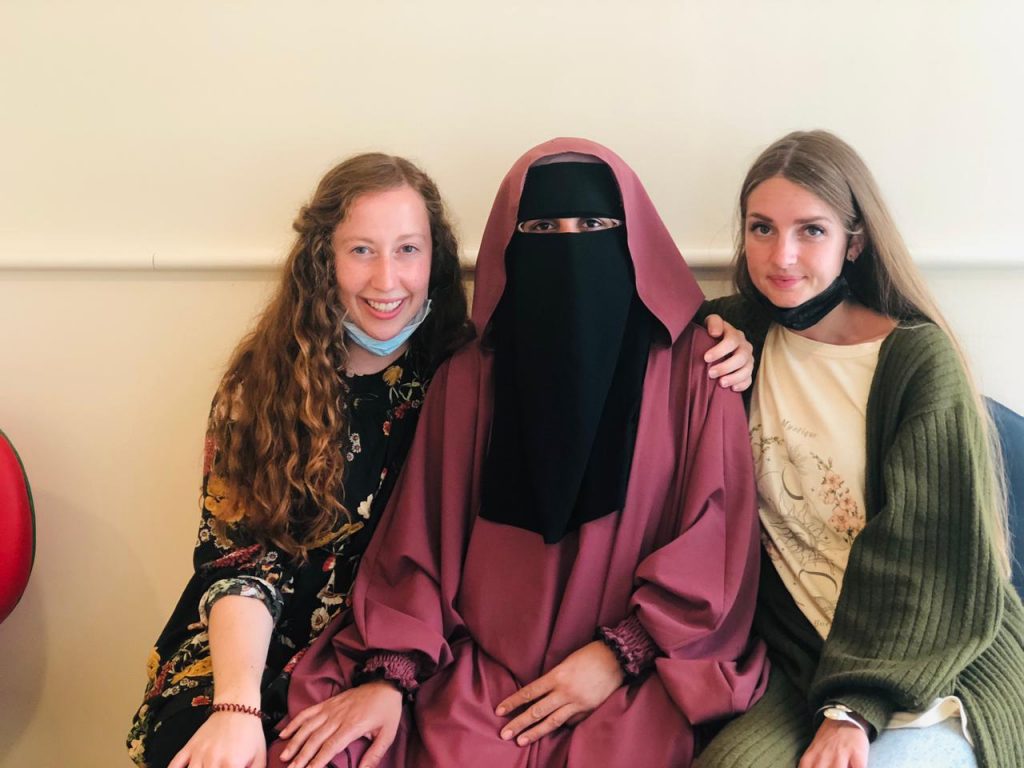 Ayan was fasting all morning in preparation for his surgery today at Sheba hospital. His was the second surgery of the day, and he was taken into theatre about two pm. His mother came out from bringing him inside the surgical area, and we sat together with co-worker Alena, another Kurdish mum, then later with more Kurdish mums. They are a caring little community of mothers. Ayan’s mother was very worried for her baby, but was able to relax a little as the time went by. 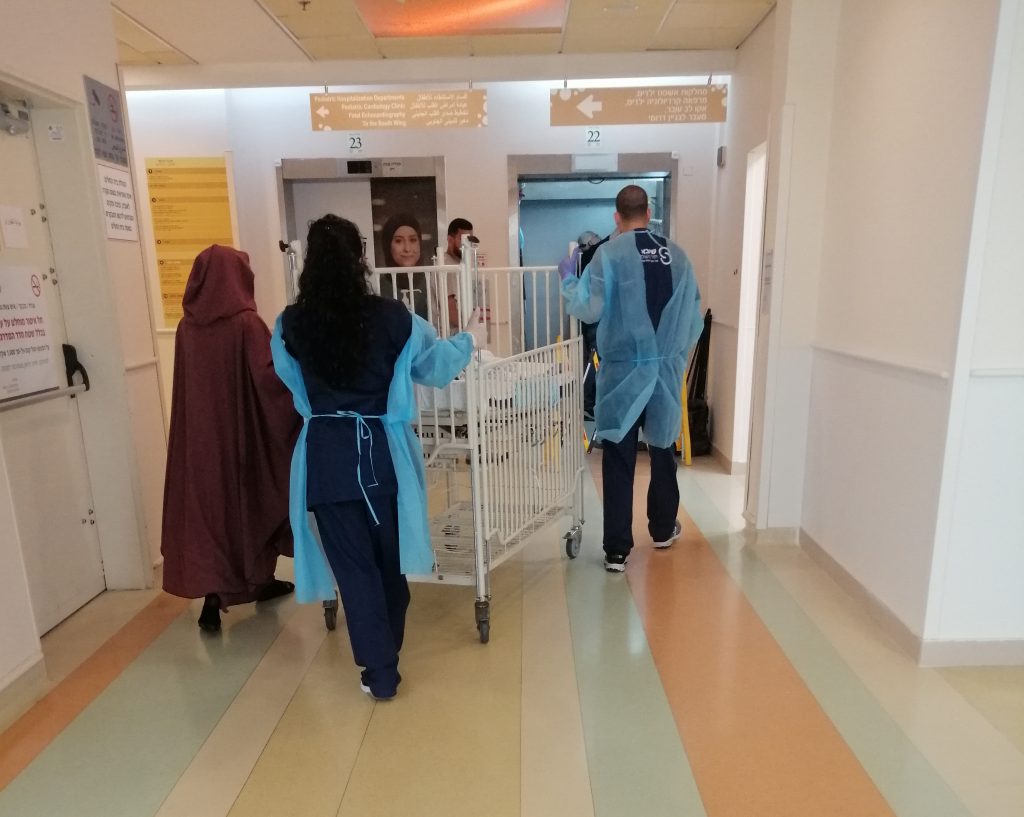 Ayan’s surgery today took two and a half hours before he was brought out of the OR. The doctor told her that they had carried out what was planned in the surgery, and Ayan was taken to the ICU, and stabilised in his room there. 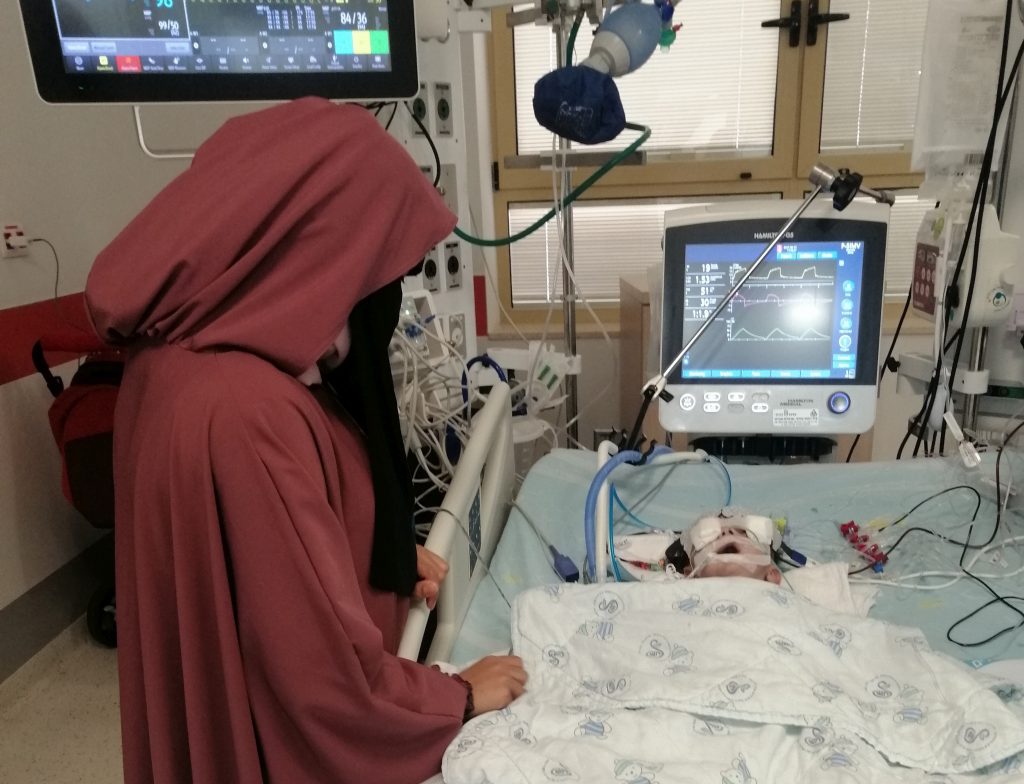 It was difficult for his mother to see him afterwards, as there were so many tubes and wires supporting his little body. His hair stuck up on one side of his head, in true Ayan style. Otherwise, he was barely recognisable, as his eyes were covered to keep them closed, his face obscured by the intubation, and his body covered by ECG cables.
Later in the evening, we heard that Ayan’s oxygen level dropped low, and there seemed to be a problem with the BT shunt. The surgical team came and reopened Ayan’s chest, to be able to assess the condition of the shunt. Thankfully, his condition has improved, and the shunt was found to be placed and working well. His chest remains open to be under surveillance, but the mother was allowed to enter the room after some hours.
Ayan needs two surgeries to fix his heart defect, as he is now almost three months old. Today’s “small” surgery, the first of the procedures, was to make a PA banding and BT shunt. This will prepare Ayan’s heart to be able to cope with the surgery next week, where they plan to switch his great arteries, correcting the heart defect.
Please pray for Ayan and his lovely mother. It has been a difficult day and evening for both of them.
Hide Comments Show Comments 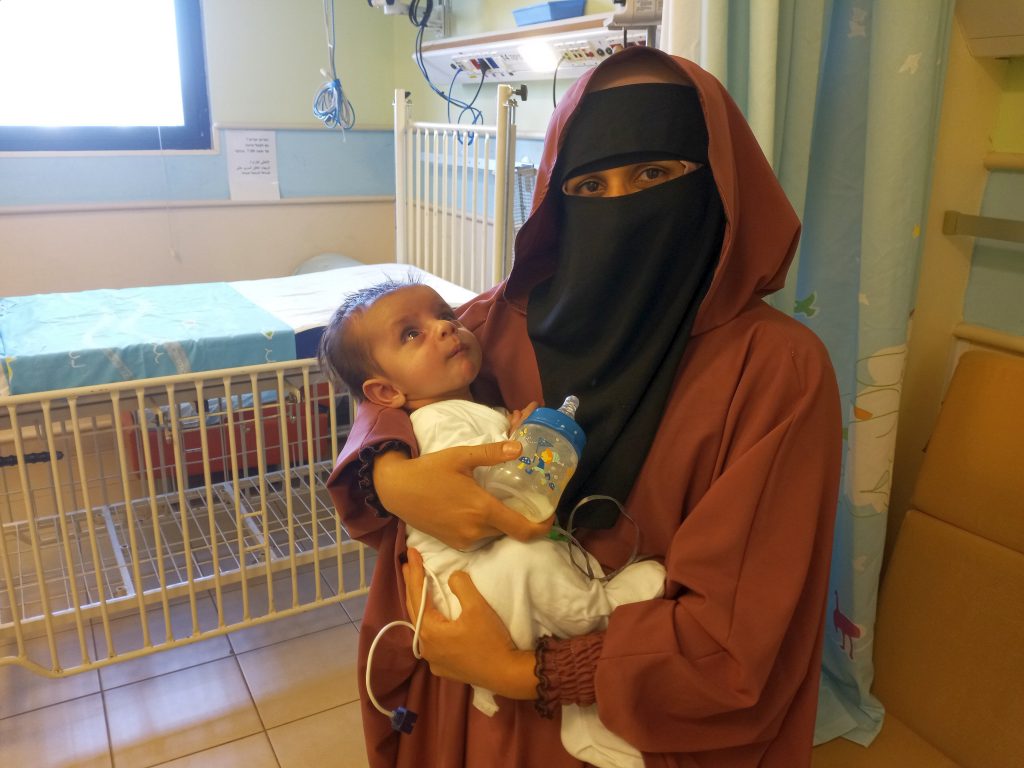 Lovely boy Ayan was called in for surgery tomorrow. Several times before we thought he would be admitted, but ended up not, and therefore his mother said she didn’t want to know next time until the last minute.

An hour before we needed to leave for the hospital, we gave her the news of his first operation scheduled tomorrow, and for this, she was very happy.

It will be her first time sleeping at the hospital, but she is a fast learner and an incredible mother. Please pray for Ayan as he goes into his first surgery tomorrow 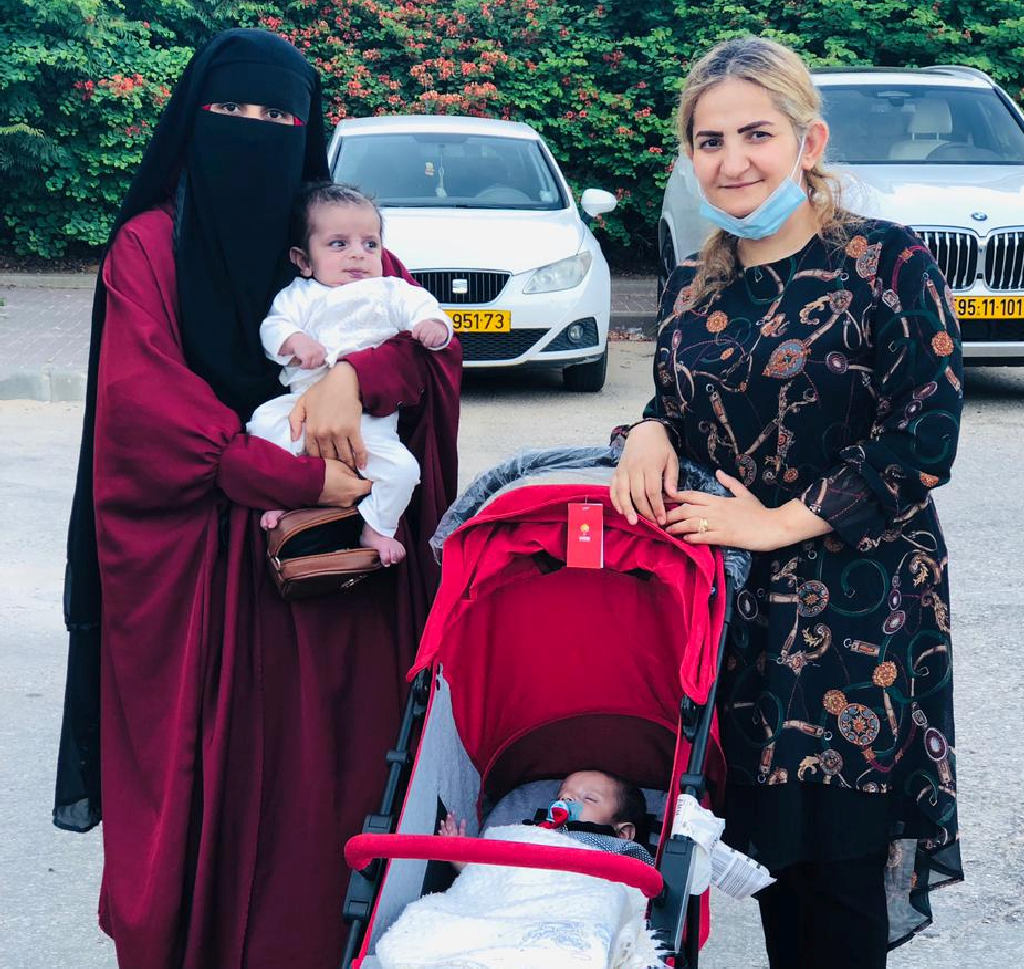 Ayan (seen here on the left) attended a routine ultrasound appointment today ahead of his surgery. Yadgar also had the ultrasound scan so it was another day together. We found out today that Ayan is planned for surgery early next week, and it looks like he will need a two-step repair process for his TGA heart defect.
Ayan was a much happier boy than yesterday, and although he is very blue, he is looking much better as he has been able to drink milk normally and not needing to fast today. He has a very sweet smile, turning up at one side before the other, and it’s lovely to hear all his little noises as he enjoys interacting with us. 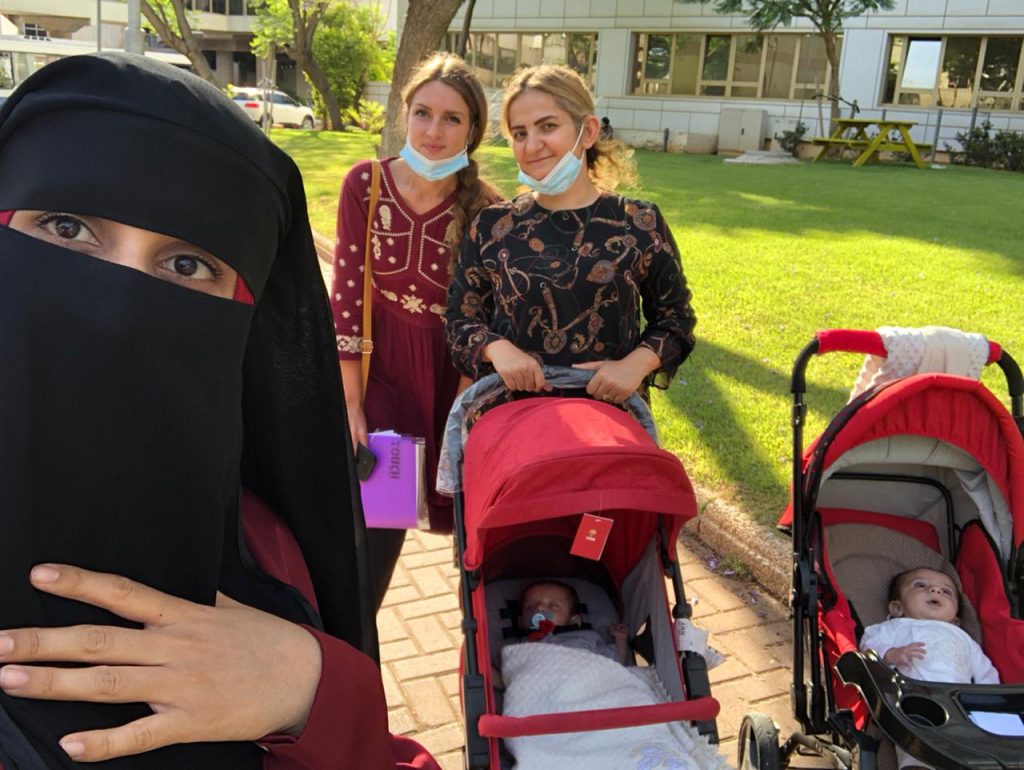 As we waited for the appointments, people at the hospital asked what is our connection to each other, as we are a very mixed group in terms of our clothing, which I’ve come to realize is quite unusual to see, and therefore people are often interested how we came to be here together.

Again and again, I am grateful for the opportunity to meet these lovely Kurdish mothers, such as Ayan’s mum; how else would we have ever come to meet each other?! Thank God for making these difficult times sweet.

Ayan had an early start, to arrive at the CT scan building of Sheba hospital this morning. He and his mother came with another Kurdish baby, Yadgar as well. It was nice to be able to spend time with them, as they are still in their quarantine period. 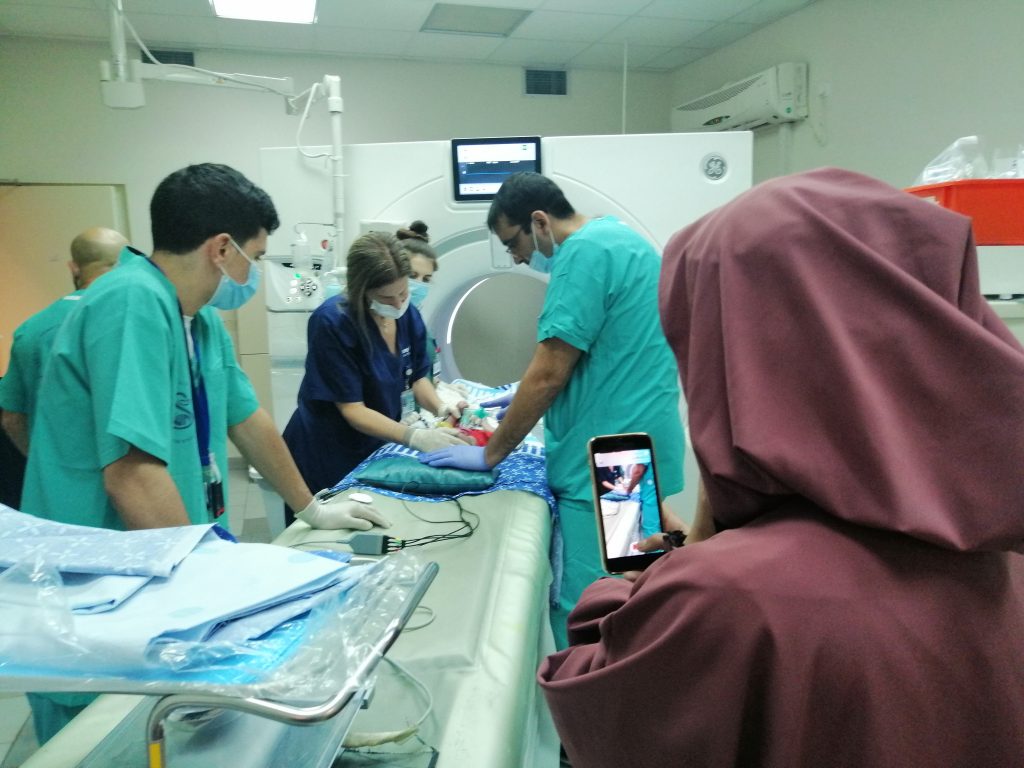 Ayan was one of the last babies to be seen, I think perhaps because he has a complex risk with anesthesia. The team of medical staff worked to put Ayan to sleep ahead of the CT scan, after which his mother and I had to leave the room. Ayan’s CT scan took only about 20 minutes, but the recovery took a lot longer. His oxygen saturation was slowing down to percentages in the 40s, as his mother tried her best to keep him calm, fed and happy. It was a lot of emotional hard work for her. 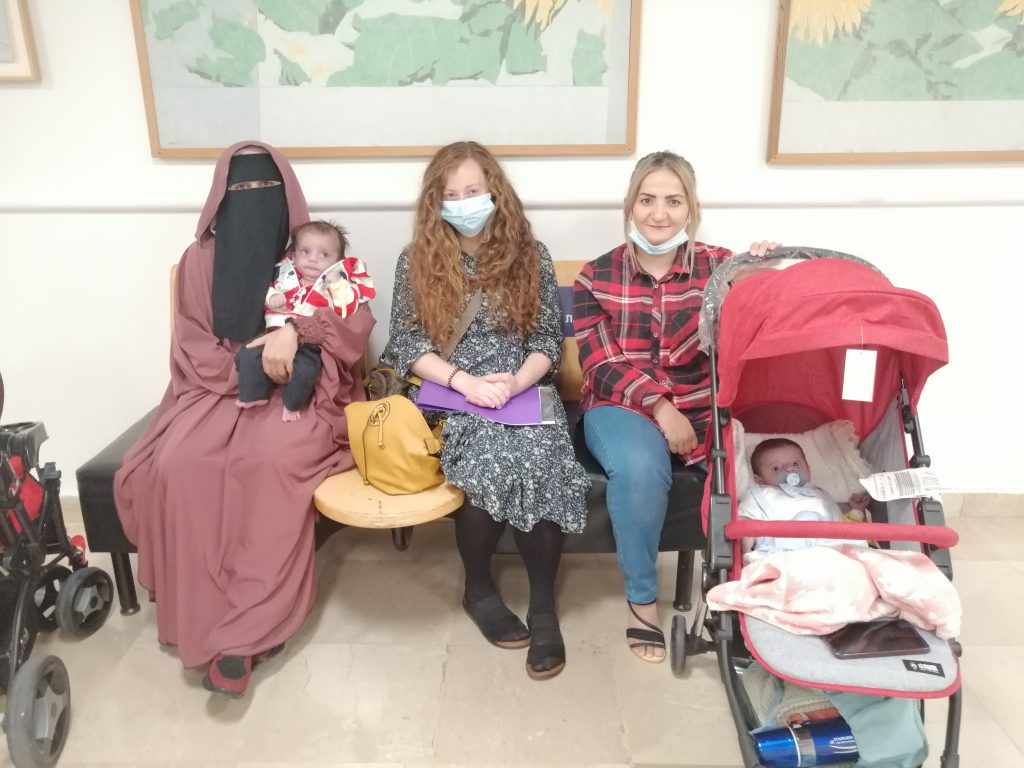 Later on, he and his mother had a corona test to prepare them for potential hospitalization for surgery. We look forward to knowing the date of his surgery and exactly what the plan for Ayan’s surgery will be.
Hide Comments Show Comments

Ayan’s first assessment was today at Sheba hospital. He was very sad in the echo and was given some sedative medication to help get some thorough images of his heart. His mother has a very sweet character, and was attentive to her baby throughout. 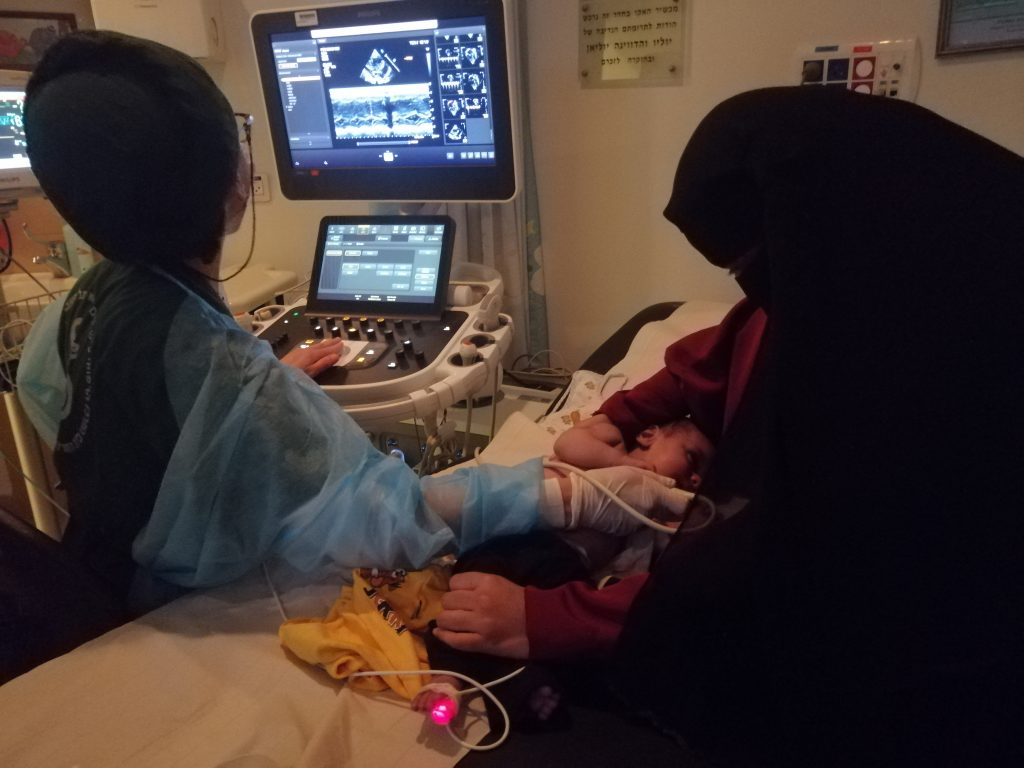 The doctor will tell us the outcome of all the assessment soon, and then we hope to look forward to the appointment for surgery.
Hide Comments Show Comments

Having landed in Amman yesterday, Ayan and his mum and three other Kurdish mothers and babies traveled today with Jonathan to the border crossing with Israel, where co-workers Sebastian, Alena and I picked them up and brought them to our community home in Jaffa. 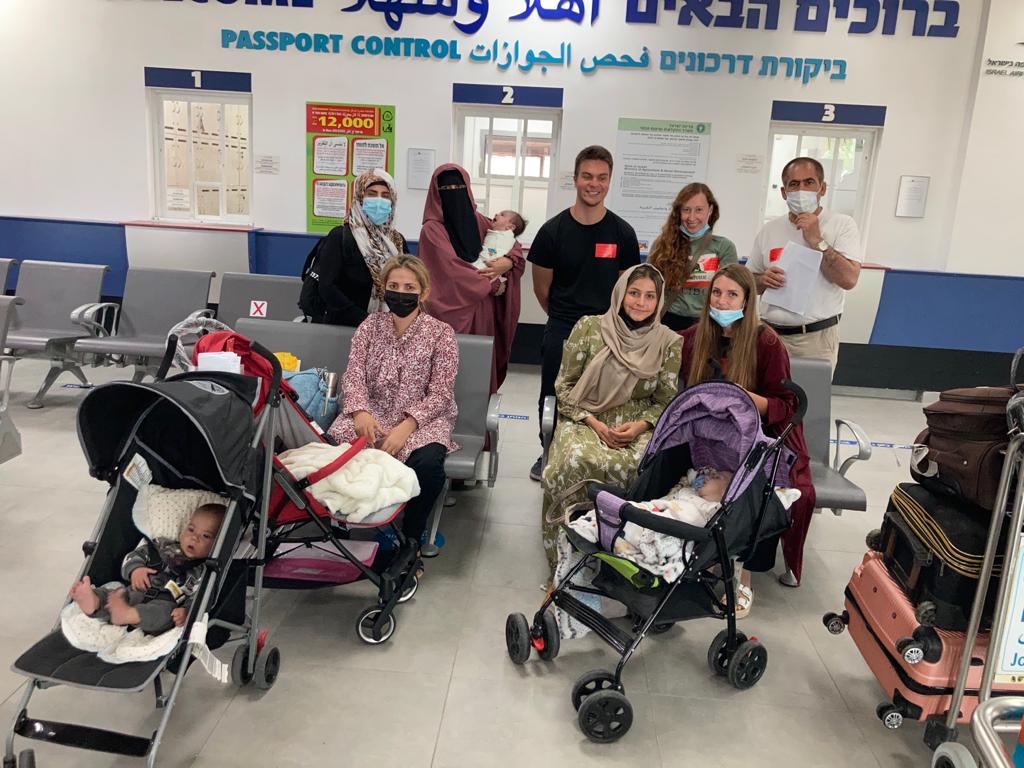 It was a fun time. We enjoyed getting to know these moms and babies. 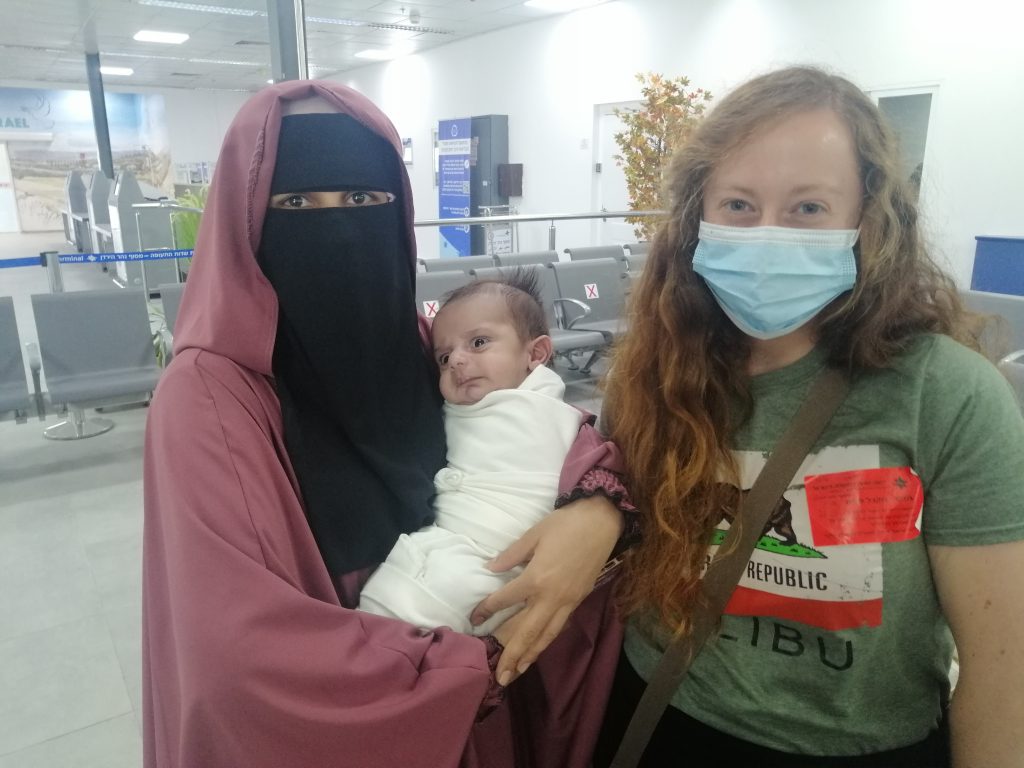 Ayan has been diagnosed with d-TGA, transposition of the great arteries, in Kurdistan. His mother shared that when he was born, his oxygen level was zero. He was taken to the cardiology doctor, and when he was two days old, they performed a catheterization which opened a hole in his heart to help some oxygenated blood flow around his body. 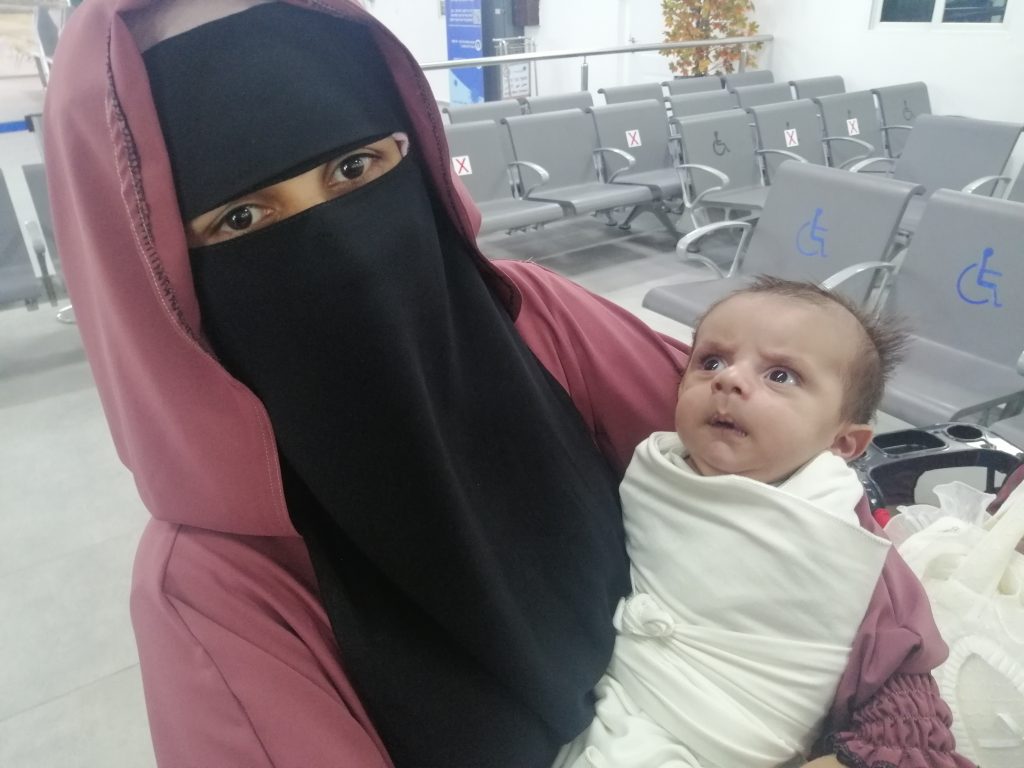 Ayan is the only child of his parents, and is very precious. Please pray that he will safely receive the life- saving surgery he needs here in Israel and for his mother also to feel confident and loved here.
Hide Comments Show Comments 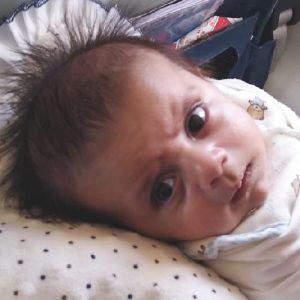 Ayan is a two month old child from Kurdistan, northern Iraq diagnosed with transposition of the great arteries.

Ayan does not yet have a local leader to advocate for prayer and financial support for his surgery.

As of right now, Ayan still needs $6000 toward surgery and related expenses.