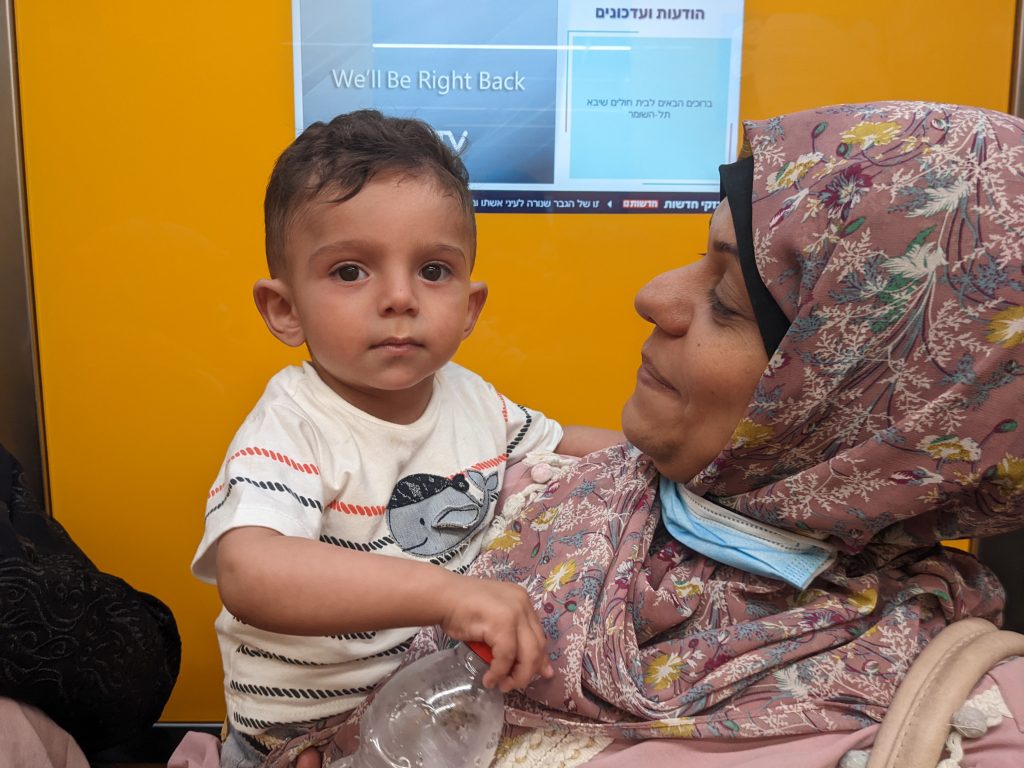 When Jonathan and I arrived at the Gaza border this morning to pick up Mohammed, his mother greeted us with a big smile and a hug. Mohammed was a bit more timid and preferred to stick close to his mom. Together, we drove to Sheba hospital for his echo appointment. 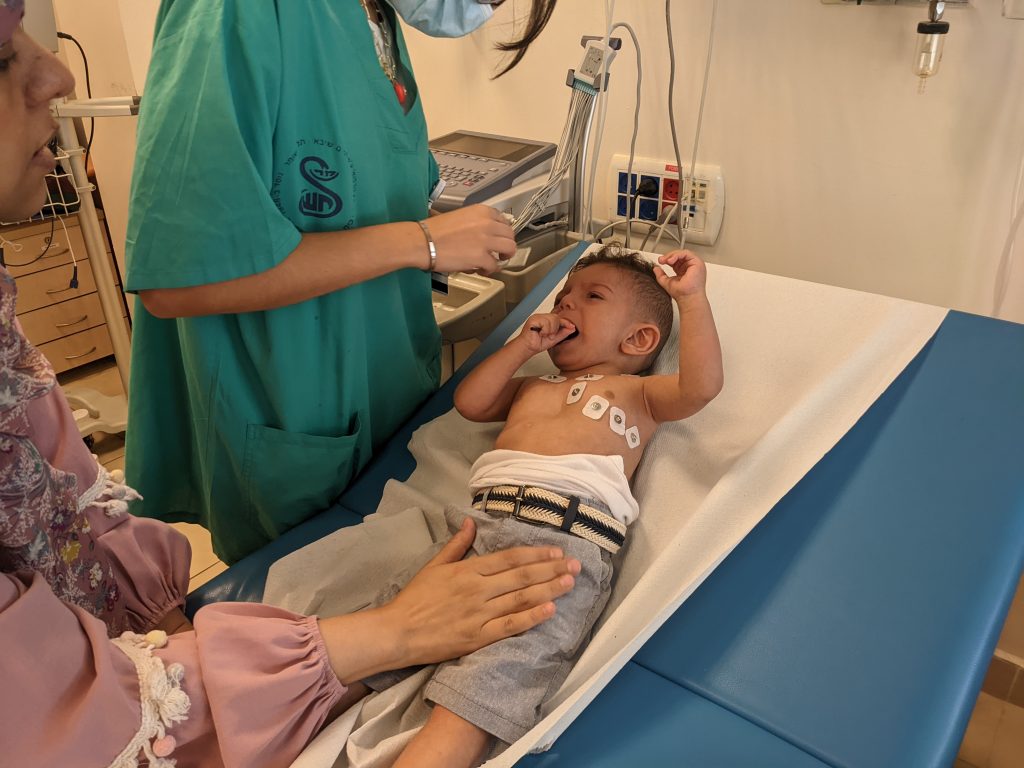 Mohammed didn’t much enjoy the exam process, but it helped that the echo technician encouraged his mom to snuggle him during the echo. We were glad to hear that the results of the echo are very good. There is a small amount of regurgitation in one of the valves, but his doctor assured us that this is normal for children with Mohammed’s heart defect and repair surgery, and it is not causing any problems at the moment. He will need to come back in a couple of months for another check-up, but for now he can go back home to Gaza without any worries. 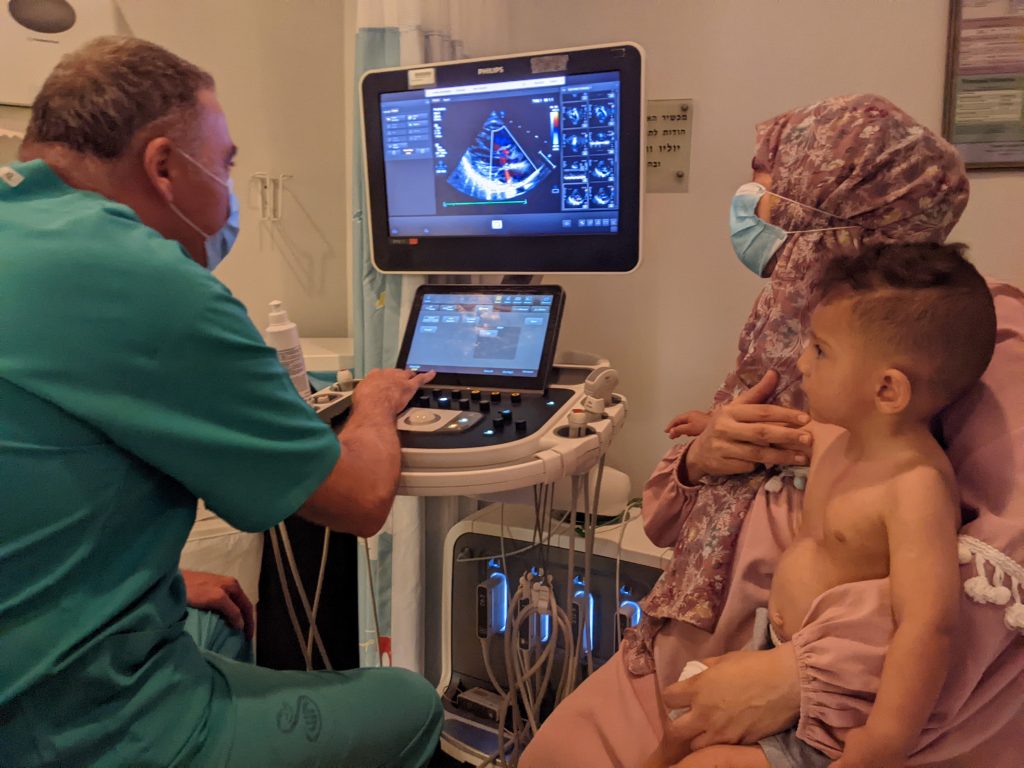 By the end of the day, Mohammed had cheered up quite a bit and was even willing to give me a shy smile in the elevator– but just for me, not for the camera.
Hide Comments Show Comments 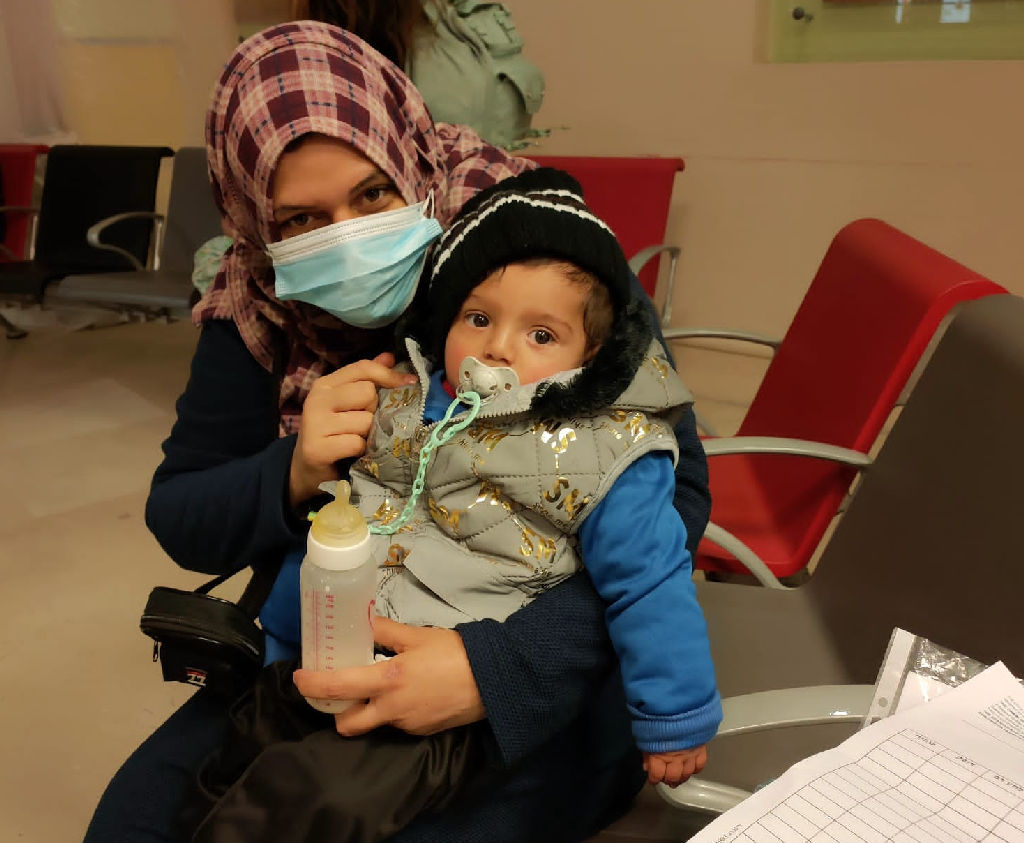 Today, coworker Willem and I picked up Mohammed and his mother at the Erez Border Crossing. We were both very happy to hear how well Mohammed’s mother could speak English. It was so nice to talk with her on our way to the hospital.

Also, little Mohammed’s pulmonology appointment went very well. The doctor was very pleased and said, “He is in a very good condition.” Mohammed will return in six months for the next checkup, with an x-ray included. 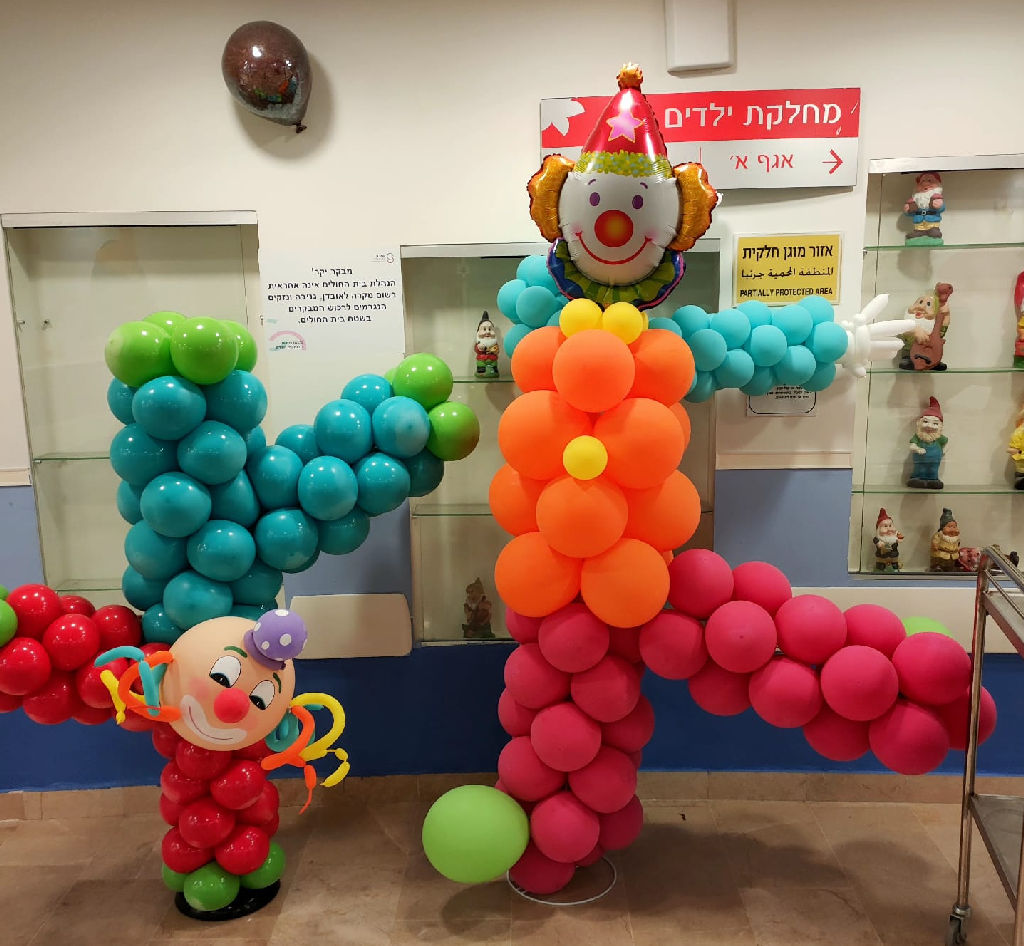 Today is also the Purim Festival, so it was quite fun to be in the hospital. Some nurses dressed up nicely for the kids and there were many balloons.

I would like to share something else with you, something Mohammed’s mother shared with me. She was telling us about two months she had spent in the past, in the hospital. During this time, our dear coworkers Georgia, Alena and Sabrina became family to her. She was telling us how much these girls mean to her and that she, back in Gaza, always talks about them. 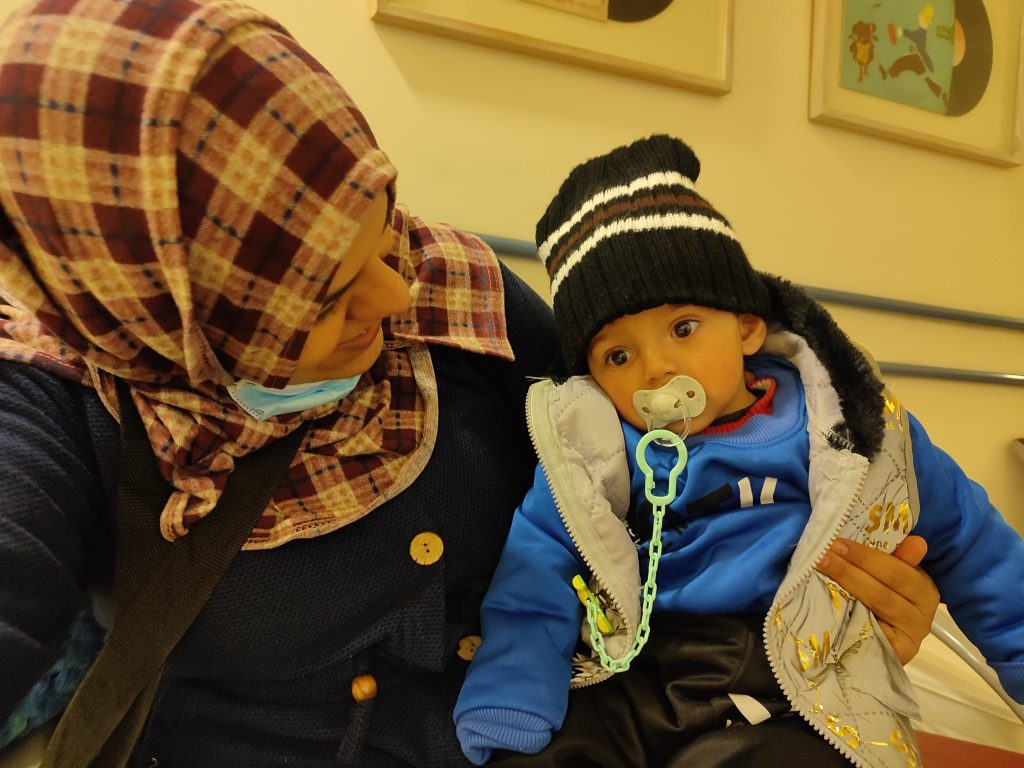 This really touched my heart and encouraged me to build up relationships with the mums we are visiting in the hospital for weeks. We can have an impact on their lives. And when they see Jesus in us, what a great impact it can have!

Let’s thank God for the good condition of Mohammed and lets also pray that God uses us to touch the hearts of the families of Gaza and Kurdistan. 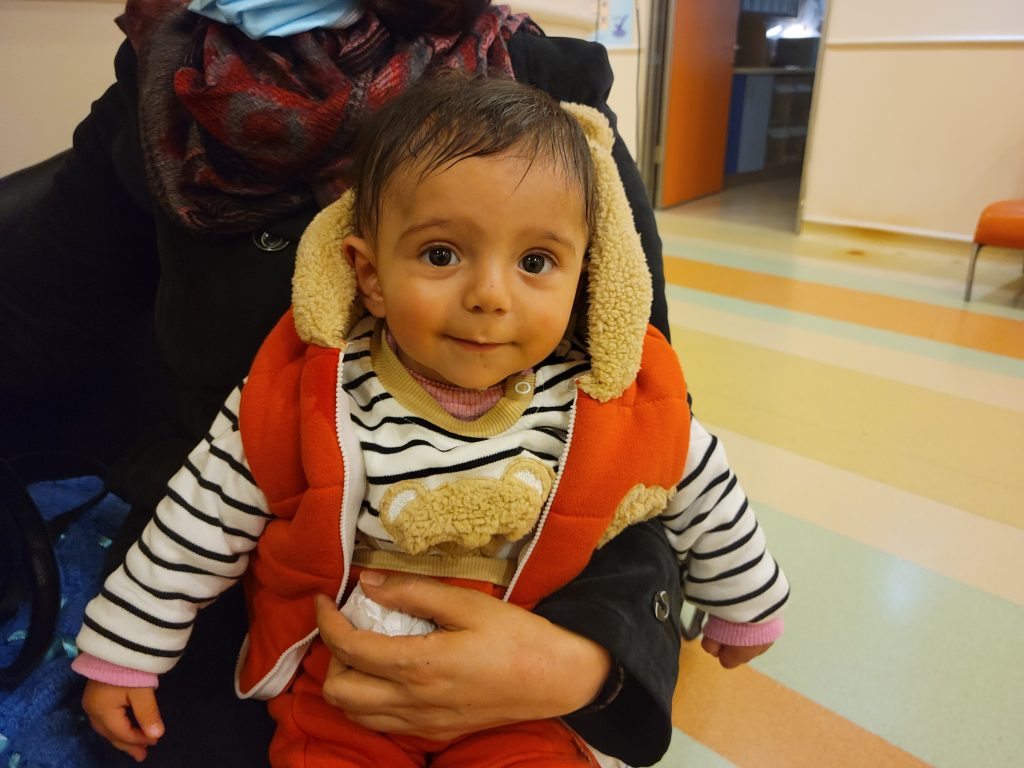 Yesterday, Mohammed Albiary was scheduled to travel from Gaza into Israel to Sheba Medical Center for an echocardiogram for doctors to better see the condition of his heart.

The doctor said that everything looked great. They would like to see him in six months from now for a check-up echo. His mother is such a kind and friendly woman, it was nice to be able to spend the time waiting with her. 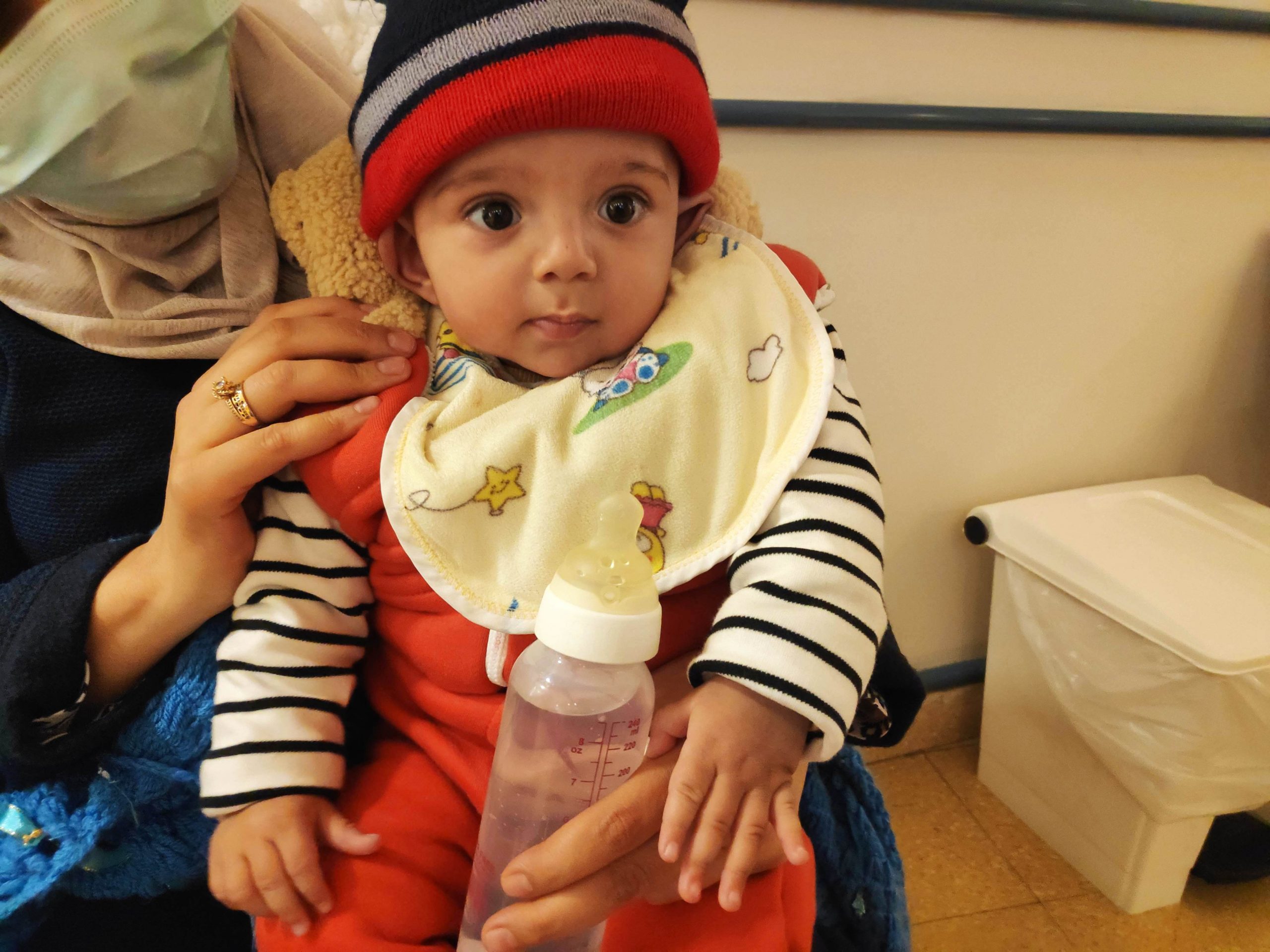 Co-worker Rachel and I went to the Erez crossing border this morning to collect this handsome boy. It was some months ago that I’ve seen him and his lovely mother and he was really small then and not in his best condition. 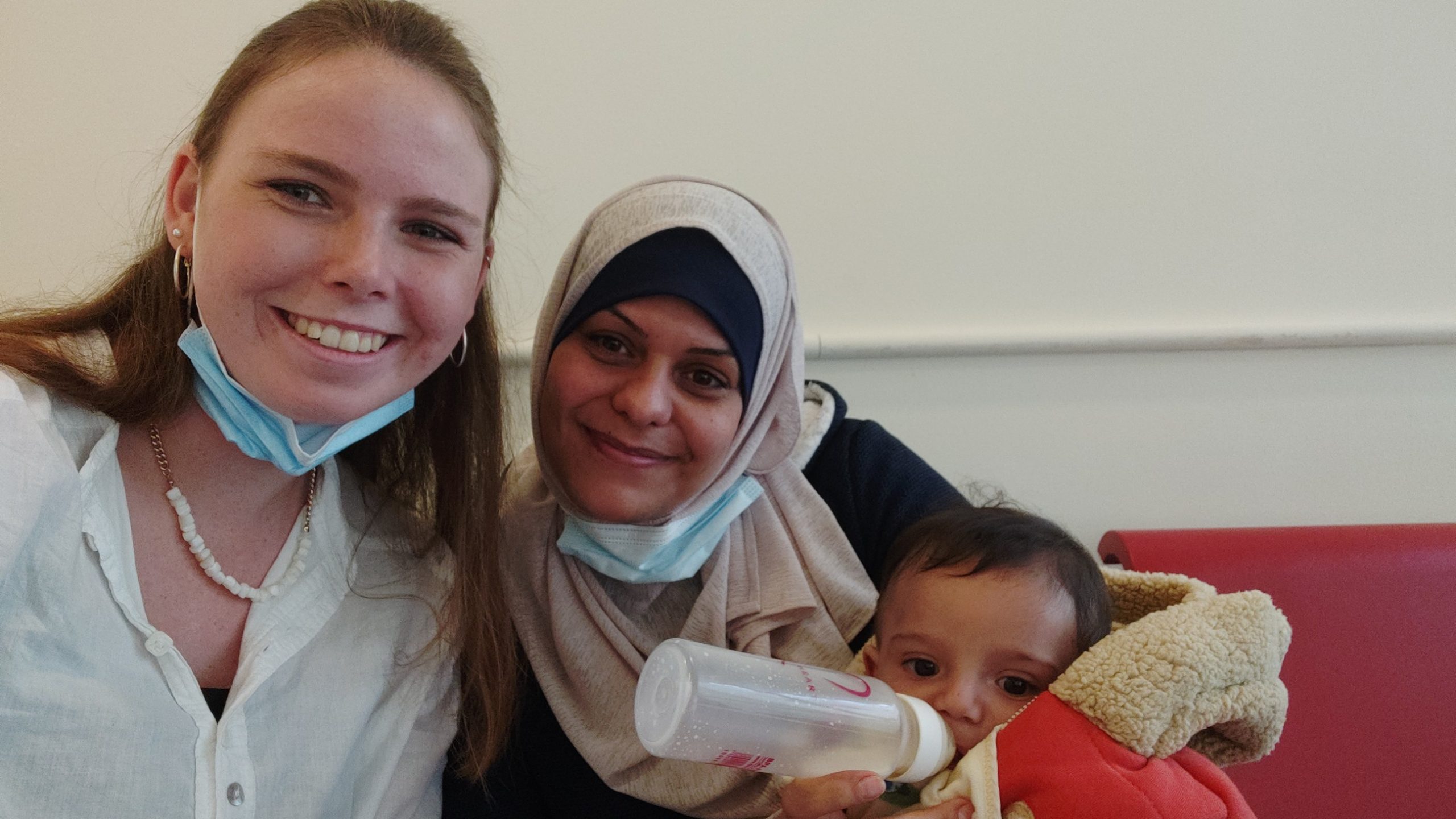 I was really happy today when I saw his mother outside of Erez and couldn’t believe how much Mohammed has grown in these past months. He had to come back today to see the pulmonologist and according to the doctor he is doing excellent, praise the Lord! 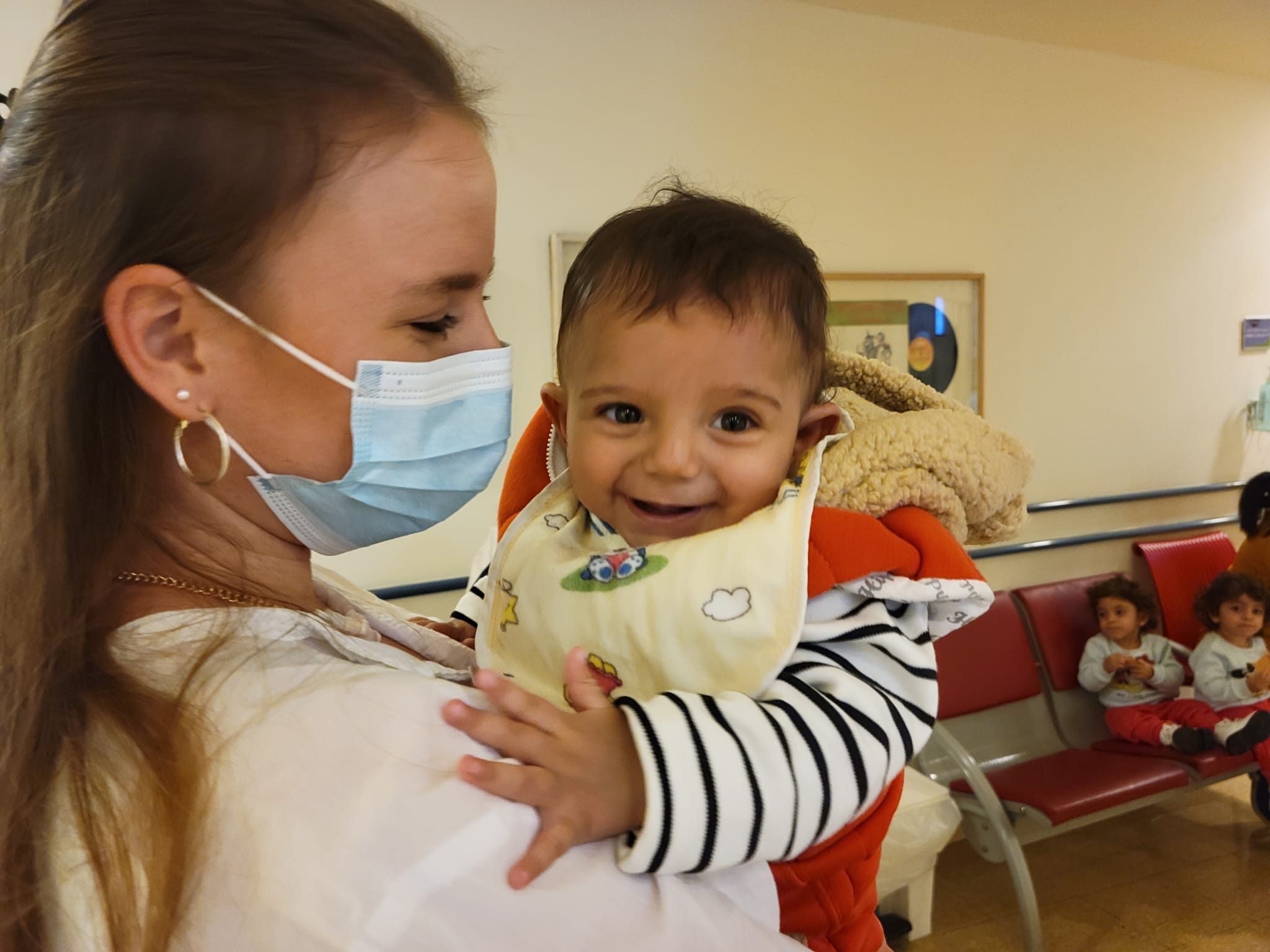 It was a really quick and nice appointment and the doctor was really friendly and happy that Mohammed was doing so well. He wants to see him again in three month’s time from now.
It’s always really nice when the families that you know very well have to come back for follow-up appointments and you see how much the children have grown and you can spend some time with them. Mohammed is a charming, cute little boy now, and he has to come back in January for his heart follow-up.
Please pray for him and his lovely, good mother to have a good time again back with their family in Gaza and that this cute boy continues to be in a good condition.
Hide Comments Show Comments 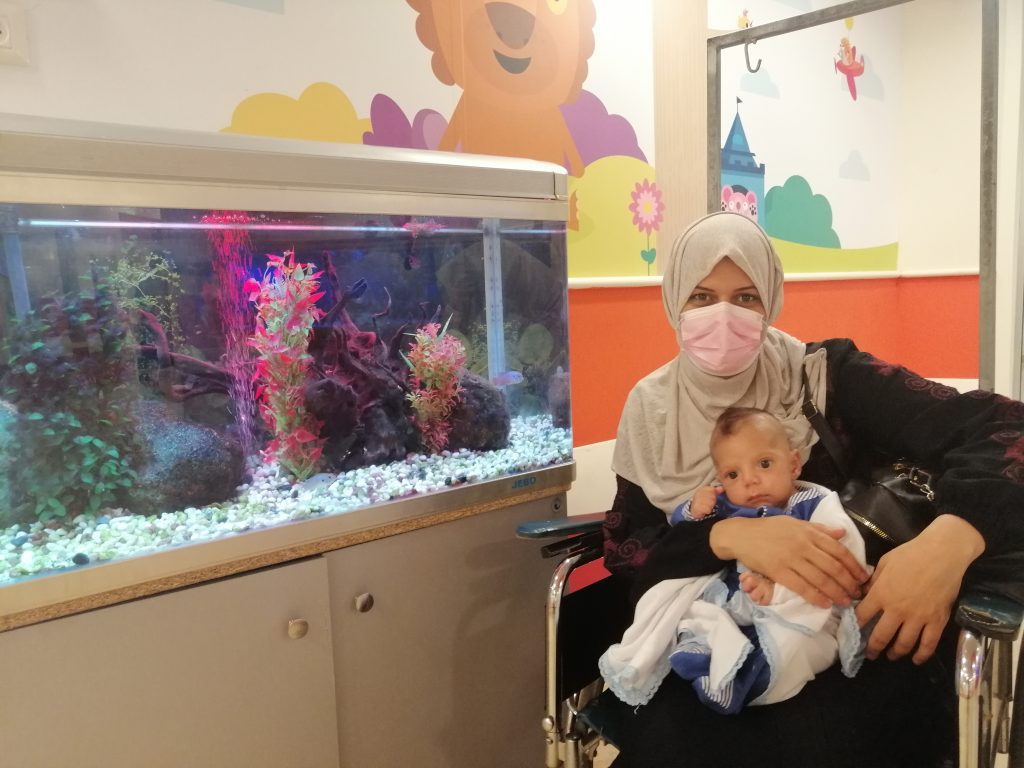 We shall all miss handsome little  Mohammed and his sweet mum. The Kurdish families whom she has been living with this week, consider her a sister, and have swapped clothes to remember each other by.
Mohammed had a great echo; the doctor commented that he is surprised that the baby is looking so very well. A different picture to what was seen a few weeks ago.
Mohammed saw the pulmonary doctor as well, who also was pleased with his condition.
In conclusion, both doctors felt Mohammed was so well, he could return to Gaza. His mother wanted to say a happy farewell to all the nurses and doctors who have helped her and her baby during these weeks.
We look forward to seeing her again and seeing how Mohammed has grown when he returns for his next check-up.
Hide Comments Show Comments 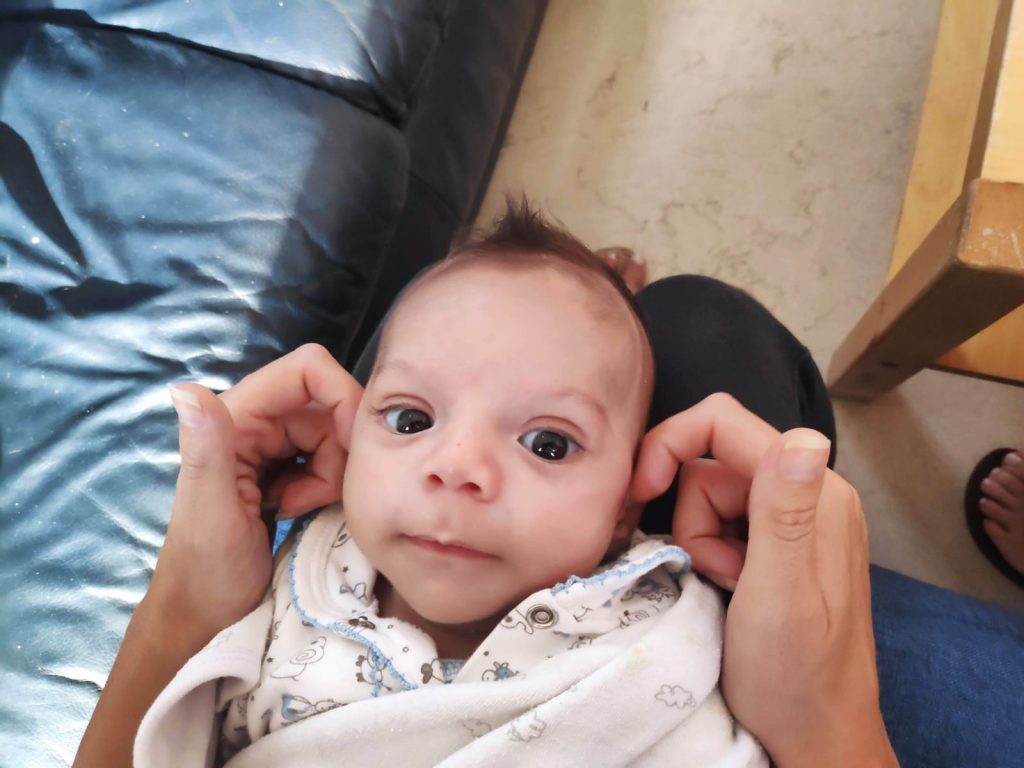 Sweet Mohammed and his mum have been discharged from Sheba hospital. It is good news, as he is getting better and bigger and stronger!
He needs to return in a week for an echo and check up at the pulmonary clinic also, and so they will stay with us in Jaffa for this time, which is a blessing for all of us, to be able to spend time with both Mohammed and his very lovely mother.
Hide Comments Show Comments 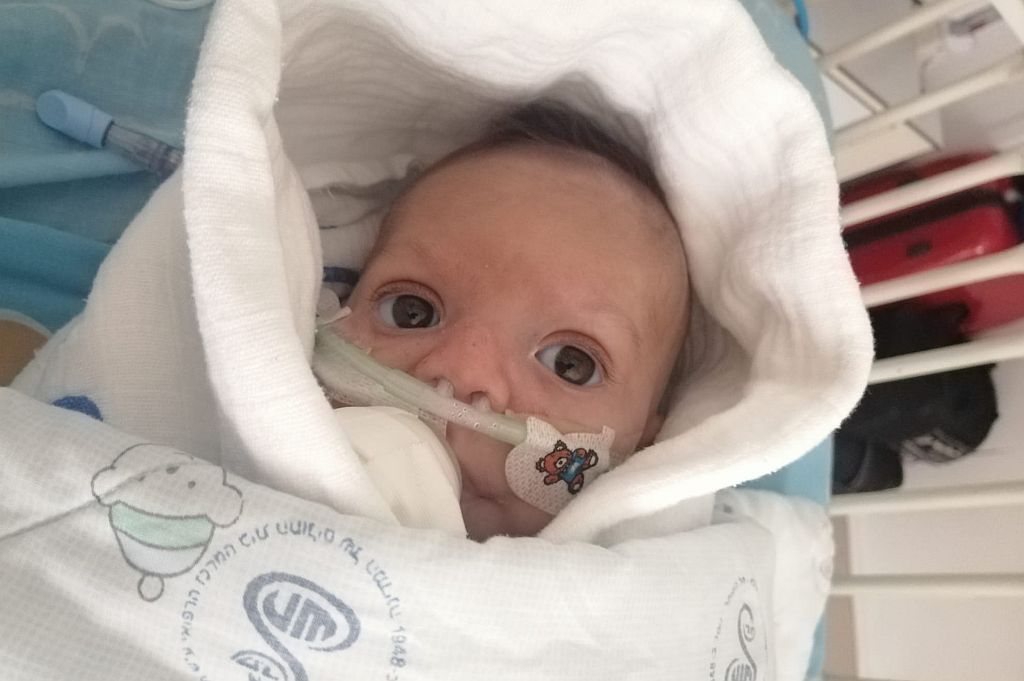 Mohammed had to be placed on high flow oxygen as his respiration suddenly increased rapidly while his oxygen dropped. Initially his mother was worried he must be reintubated, but while he is receiving a lot of oxygen support, she is happy he is not on mechanical ventilation.
Please keep praying for this beautiful boy and the road ahead for him.
Hide Comments Show Comments 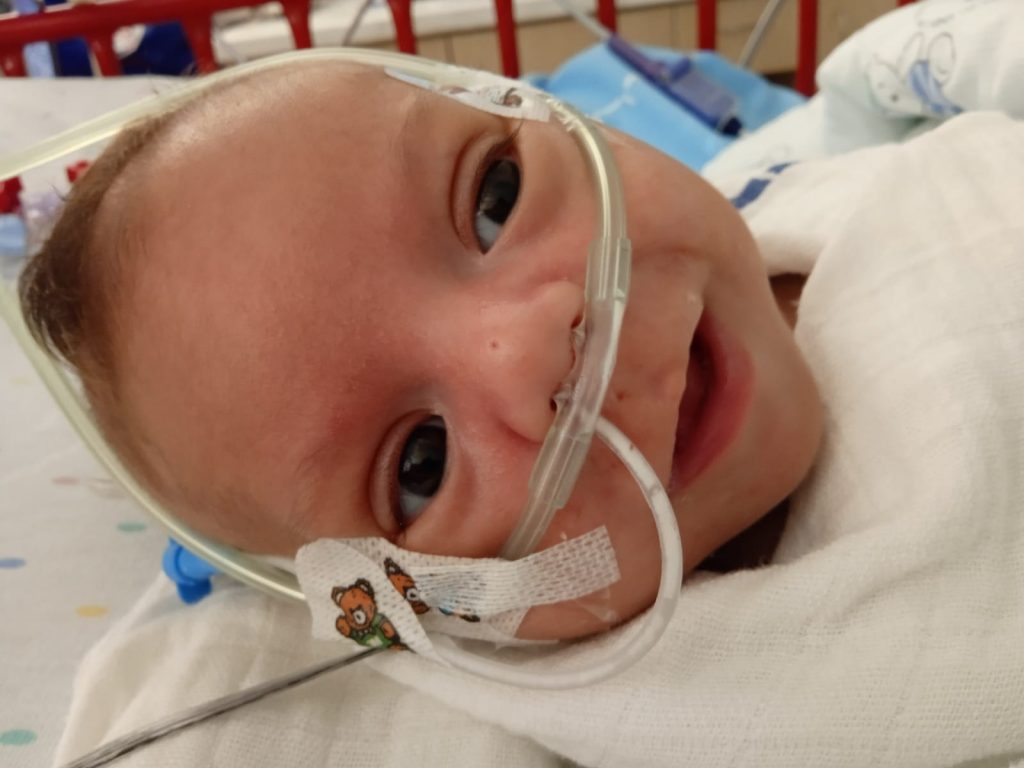 This beautiful boy has been extubated and is only now with oxygen. His mother is so, so happy and apparently Mohammed is too. She captured his first smile after his extubating!
His condition has improved and he is being slowly introduced to feeding orally. His mother is an outstanding caretaker, and I think that much of Mohammed’s progress stems not only from the excellent medical care, but also from his mother’s keen eye for her precious little Mohammed.
Thanks be to God for this lovely boy and his big smile.
Hide Comments Show Comments 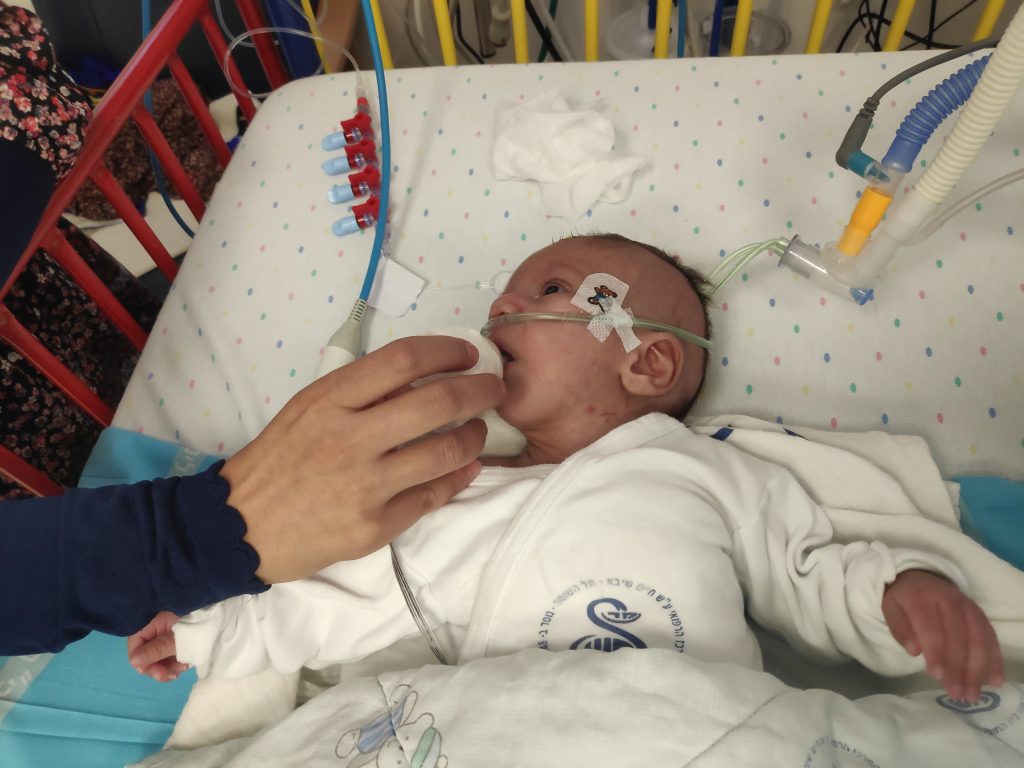 “He is so tired and he is trying to tell me something; I can feel it.”

These were the words of Mohammed’s lovely mother today during my visit with them at Sheba hospital. Our little boy is extubated again and he was crying a lot during my visit. His mother is generally a really happy woman, never complaining about anything, smiling a lot. I love to visit her because she has that beautiful attitude of smiling and giving her love to other people no matter what circumstances she is in. It is lovely to be a witness of that attitude and I can learn a lot from her.

However, the happiest of women are sad sometimes and today was Mohammed’s mother’s day for sadness as she looked at her beloved little son wanting to help him, but could not. She said she knows that God can help him and she continues to pray for him.

She really has a beautiful attitude in the whole situation but that doesn’t mean it is easy for her. So please join me in prayer for this lovely mother and for Mohammed. 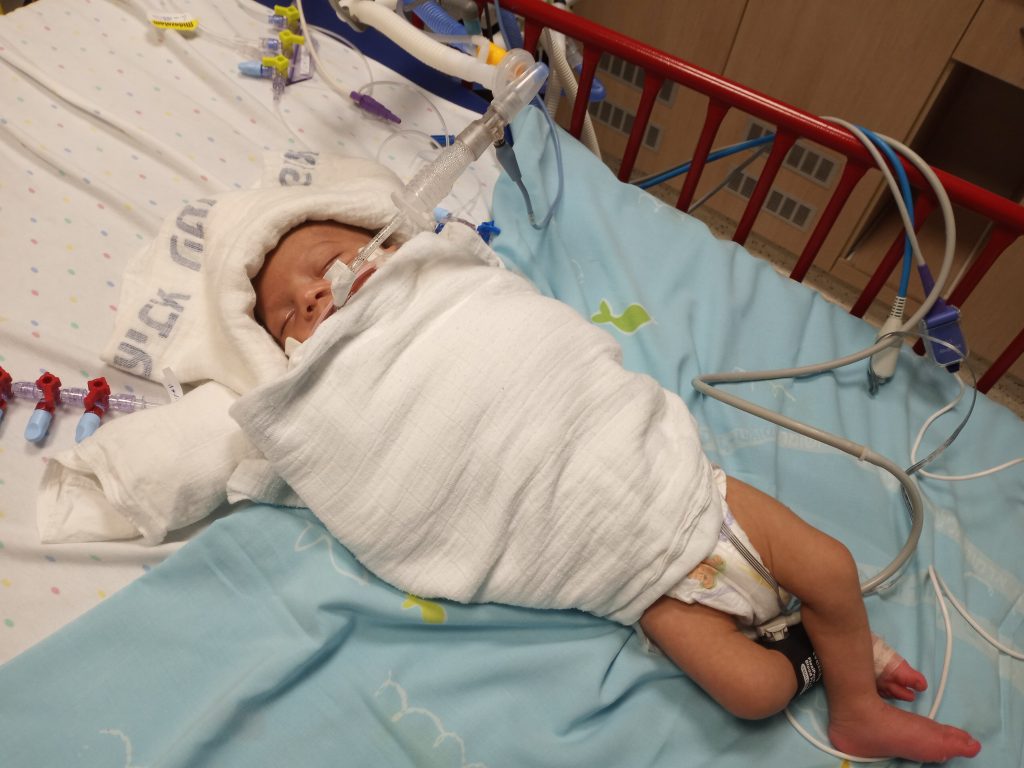 Mohammed’s breathing became very labored recently even though in the days after his surgery, he seemed to be improving. This caused his mother a great deal of alarm. His doctors saw that Mohammed’s trachea had narrowed and in order to breathe, needed to be reintubated, or placed back on mechanical ventilation.
His mother has asked for prayer for her son. This remarkable lady has beautiful faith in God, and is in many ways an encouragement to my own.
We love her and Mohammed dearly. Please pray for his recovery with us.
Hide Comments Show Comments 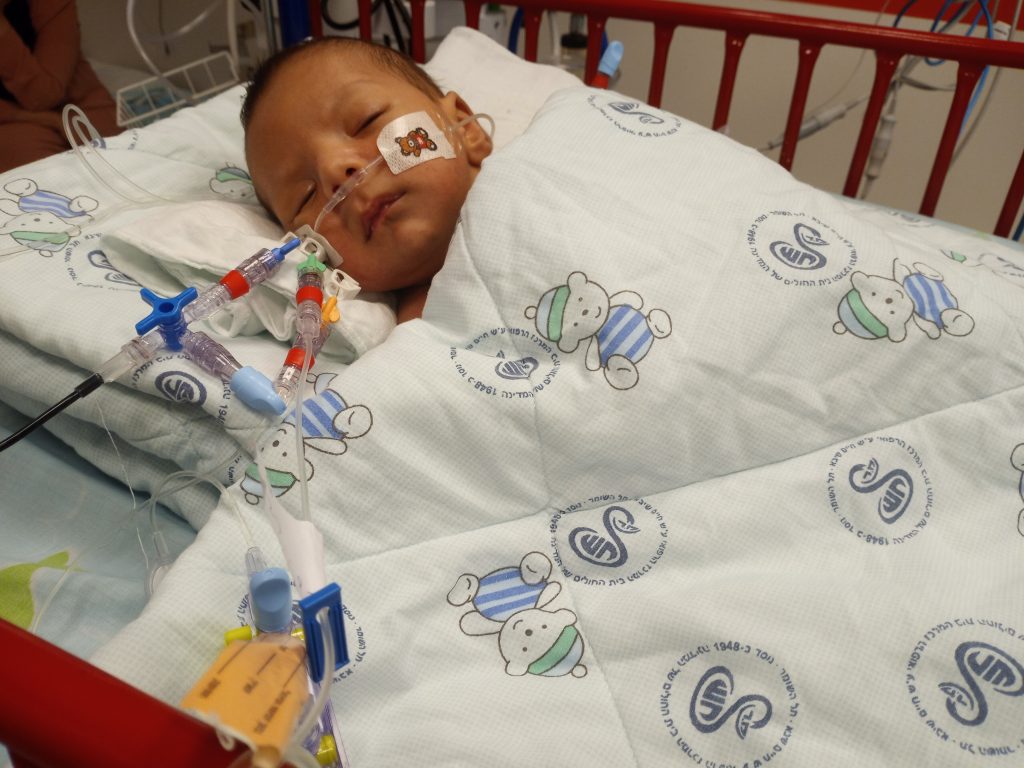 Mohammed is extubated after his surgery, and his mum is very happy for this improvement. In the midst of this joy for her own son, she has been a very good friend to some of the other mothers from Kurdistan who experienced the tragic loss of a baby recently. She texted me the day after this sad event to ask after the child’s mother.

Your prayers for this lovely boy are appreciated. 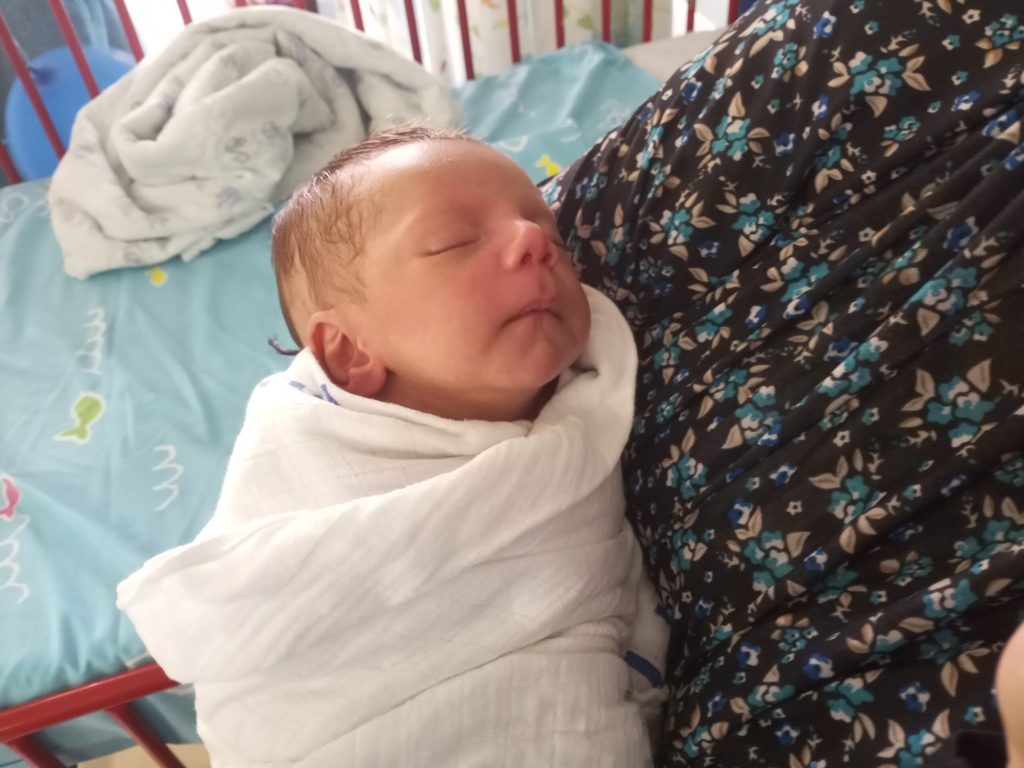 This lovely boy is just one month old and today underwent surgery to correct the Tetralogy of Fallot at Sheba Medical Center. His mother, an English speaker, has already researched his condition extensively and picked up very well the intricacies of the procedure. 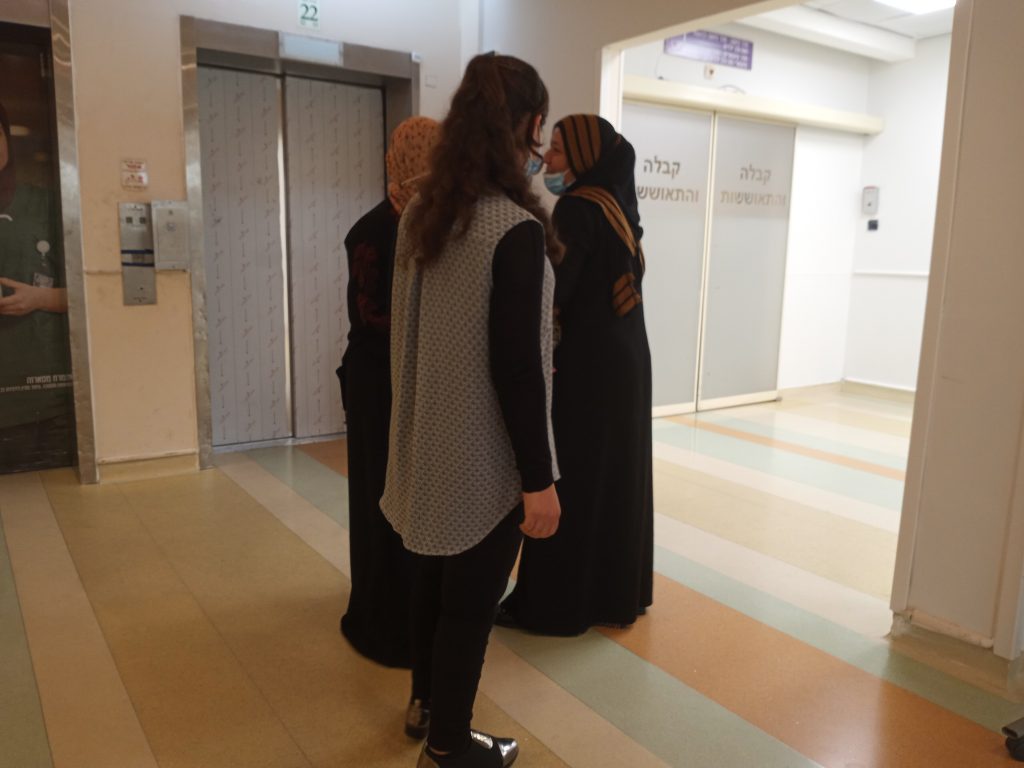 The surgery took about five hours. After he came out of the OR, she wanted to tell everyone on the ward! Some of our Kurdish families in hospital at this time, were also checking on her even though they’d just met her. There was shared joy when the surgeon came out to say that the operation was successful. 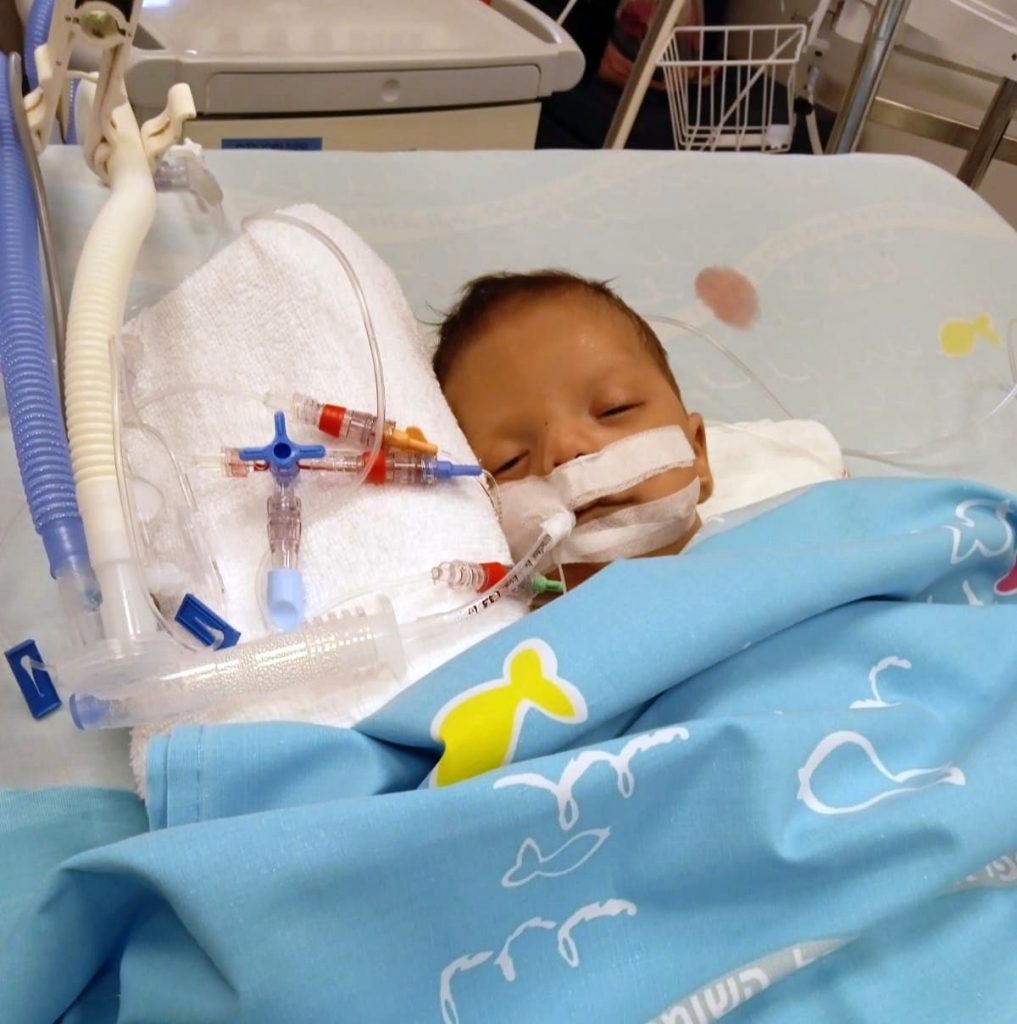 Mohammed’s surgery was scheduled for last week, but today was different. Even before she knew for sure that he would have surgery today, she said she knew in her heart that he would and a mother’s heart always knows. All the doctors of the ward she was in, commented on how wonderful Mohammed’s mother is and how well she cares for her son. She is quite a uniquely remarkable woman.
It was a beautiful day today, we pray there are no complications as he recovers.
Hide Comments Show Comments 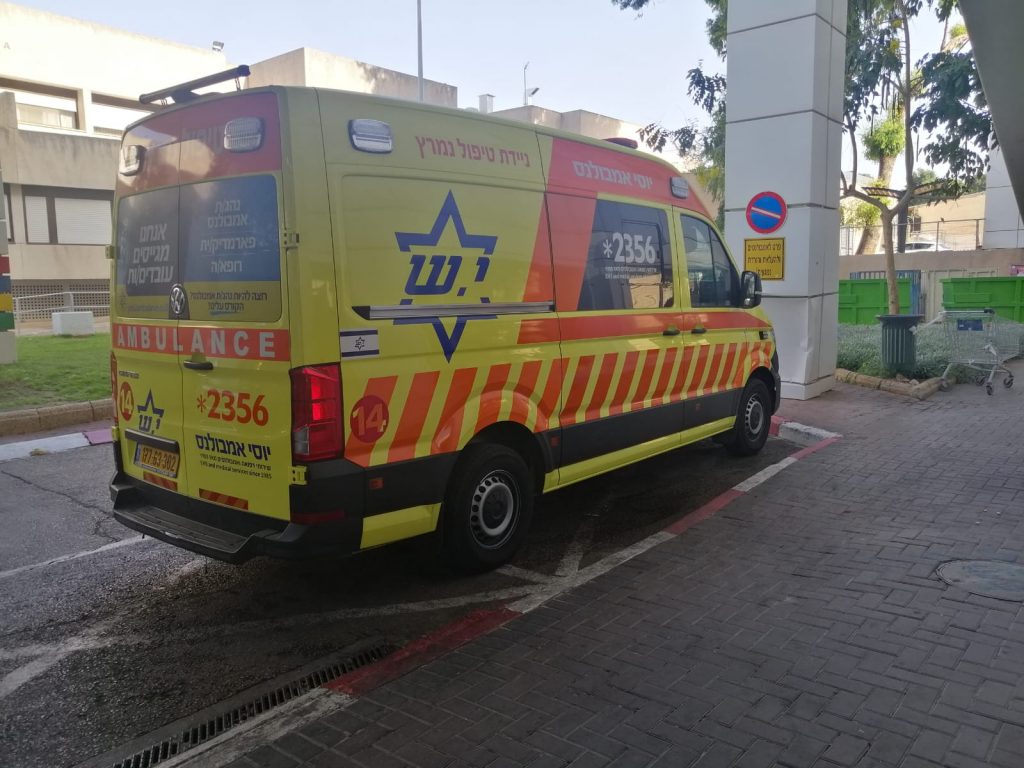 Baby Mohammed came urgently to Sheba today from Gaza, for treatment for multiple heart defects. His mother was well up to date on his condition, as she said that her father is a nurse and could help her understand everything. 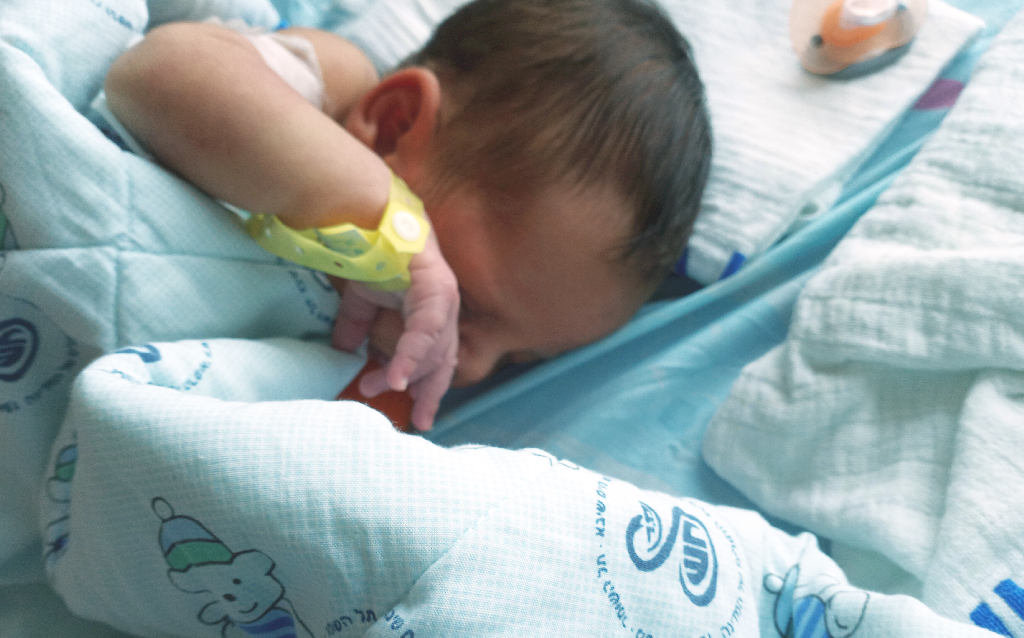 While it is often that babies from Gaza come in an emergency situation, hearing the story of each individual family makes me realize I couldn’t imagine what they go through. For many guardians, this is the first time they are outside of their city, with a newborn baby that traveled between Erez checkpoint and two ambulances.
But one thing his mother mentioned today, was that she found comfort in the warmth and receptivity of the hospital staff. We are so thankful for Sheba hospital taking on these difficult and urgent cases, and treating every child with compassion and love.
Please pray for this little one as he undergoes treatment.
Hide Comments Show Comments 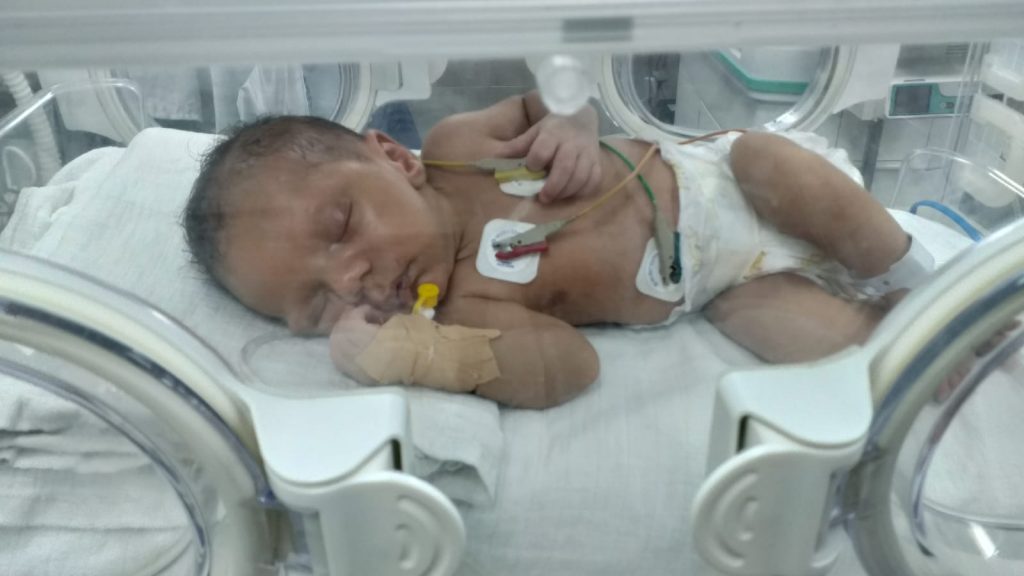 Baby Mohammed was born in Gaza just four days after the end of recent fighting there. When doctors saw he was blue, they sent him for an urgent echocardiogram. This revealed he has pulmonary atresia which can only be treated in Israel. 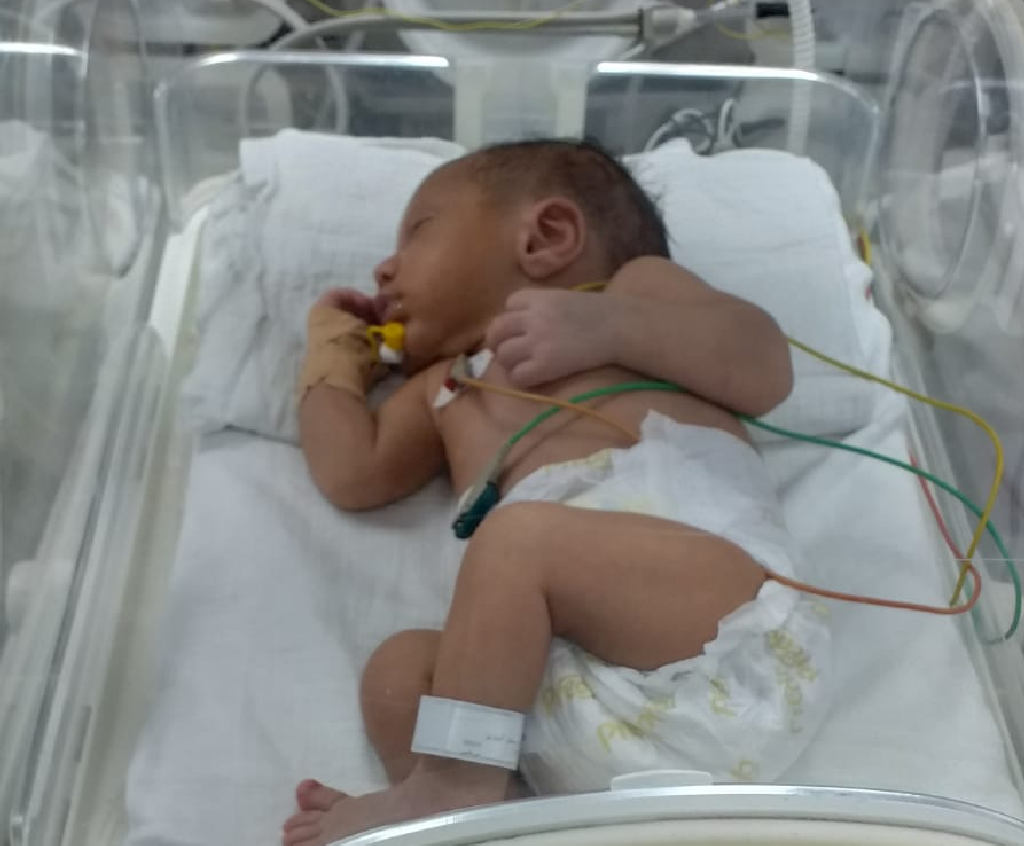 He is being kept alive by administration of the medicine prostaglandin, which keeps open a crucial duct to the heart which normally closes after birth. The Sheba Medical Center has agreed to accept him today and our coworker Amar is working to transfer him by ICU ambulance 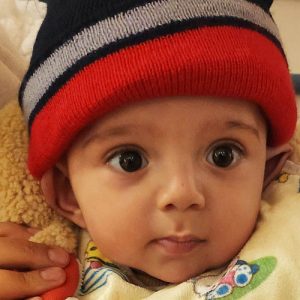 As of right now, Mohammed from Gaza still needs $6000 toward surgery and related expenses.