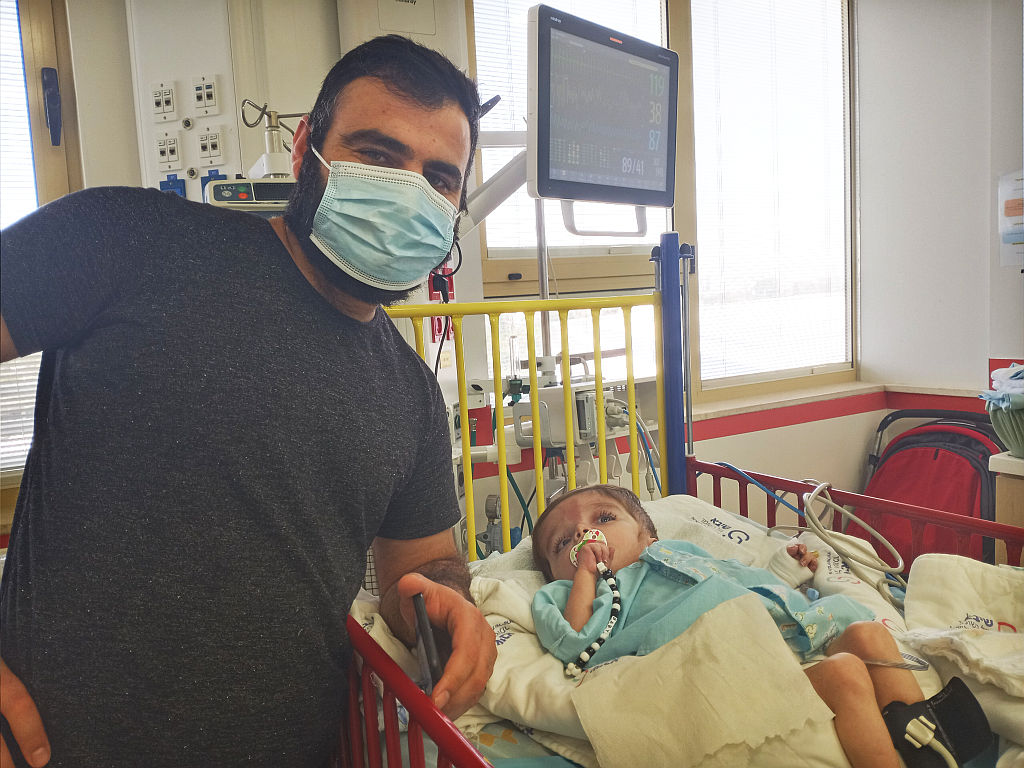 Mohammed M had a diagnostic catheterization today at Sheba hospital, to determine his eligibility for future surgeries.
He is currently seven kilos. After the cath today, doctors said they would like to him to be at least three more kilos before doing any further intervention.
Please continue to pray for this lovely boy and his very devoted father.
Hide Comments Show Comments 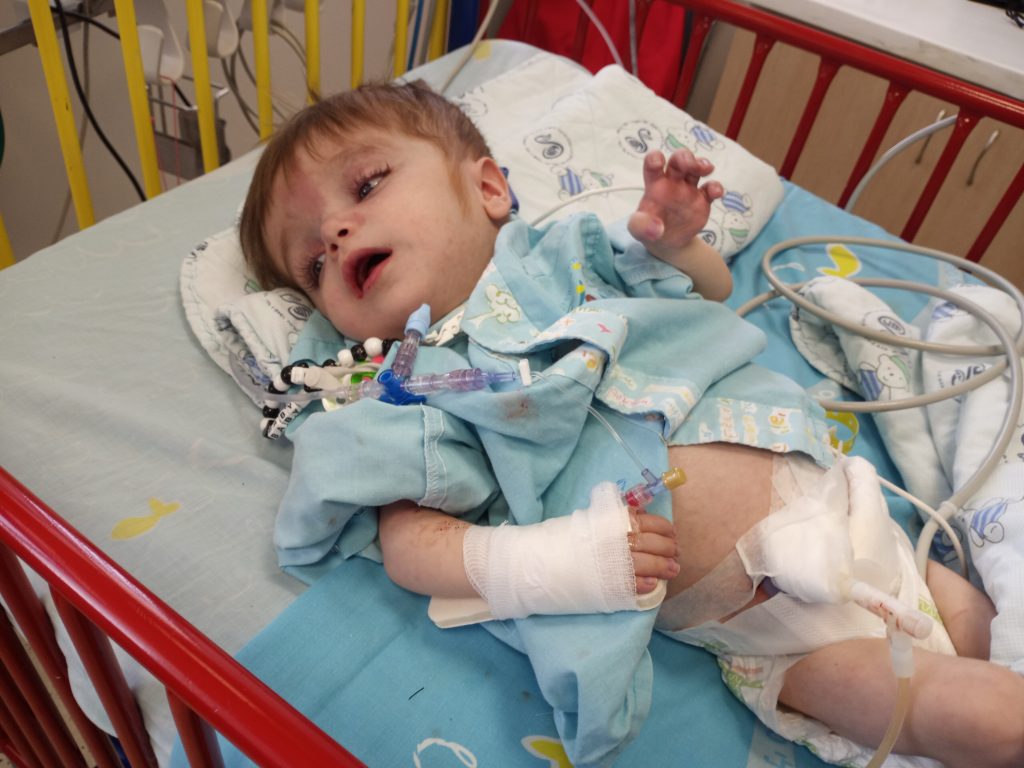 One of the cardiologists at Sheba hospital spoke with Mohammed’s father yesterday to explain to him that his son would be having a catheterization tomorrow. But it would not be a normal cardiac catheterization.

They would instead be inserting a catheter in his abdomen to drain the the fluid build-up there and also the fluid around his lungs. He will be with this for at least twenty four hours, and the doctor who will do the procedure was hopeful it would help control the fluid build-up in his stomach as well.

The procedure took place today according to plan. It only lasted a few minutes and was done in Mohammed’s room in the ICU; his father, as always, was calm and supportive of his boy. Before the procedure, his father went downstairs and I stayed with Mohammed. He fell asleep as I brushed his hair with my fingers, and as he did so, I was so thankful that he was able to come here for treatment. At the same time, I am quite sad for the difficulty of his condition even after surgery.

So with that, please continue to pray for healing for him. 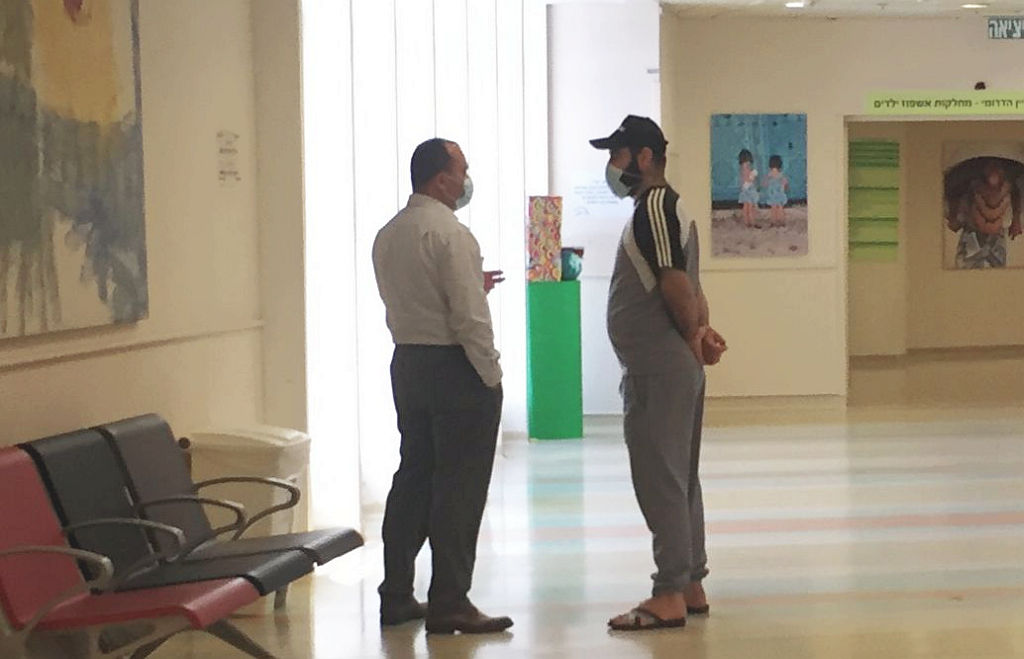 Mohammed’s father has been sure there must be more that can be done to study and treat this persistent swollen stomach, and blue-tinged finger tips; all this he’s been seeing in Mohammed in the previous couple of days.
Today, he welcomed the group of Kurdish families who were arriving for their first echos, in his usual upbeat and encouraging manner, also becoming involved with translation for one of the mothers who lives in the same city.
Later came the surprise that Mohammed is scheduled for a catheterisation tomorrow. The doctor explained the aims of this to Mohammed’s father, who is happy and hopeful that this will provide some help for Mohammed’s symptoms.
Please pray for sweet Mohammed tomorrow, that this will be a big help and step forward for him.
Hide Comments Show Comments 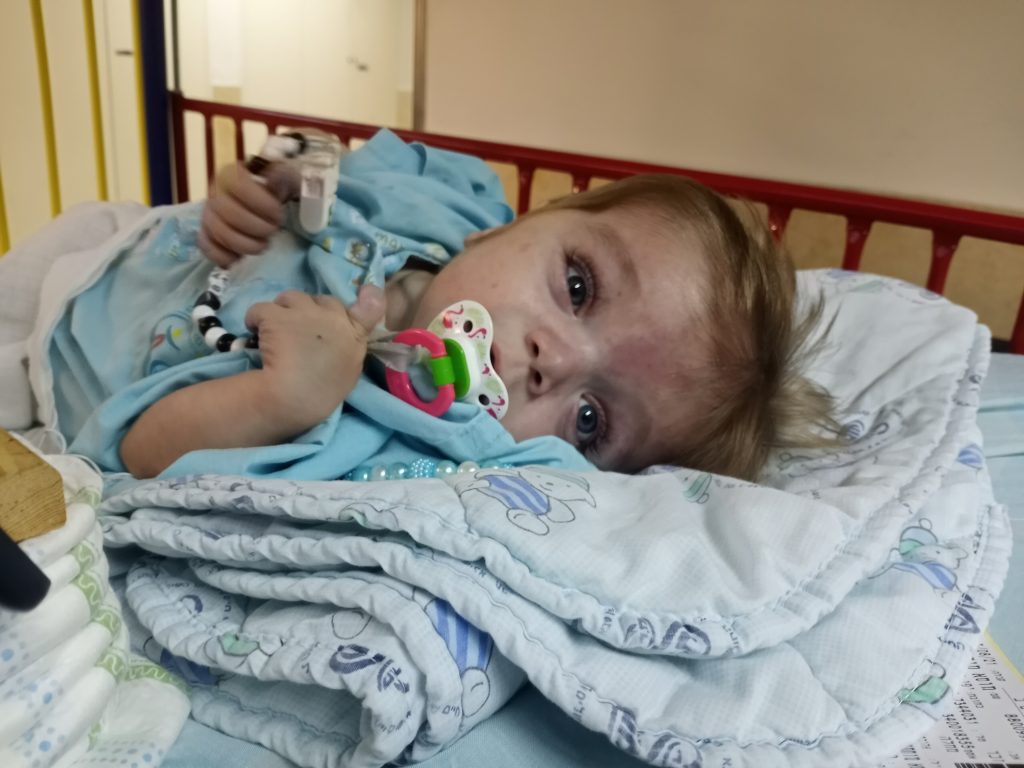 Mohammed’s stomach swelling has gone down by a few centimeters, so please pray this continues.

His doctor does not believe he has the congenital defect in his intestines based on the multiple tests they have done on little Mohammed. But his stomach swelling still remains an issue, so please pray for Mohammed and also for the doctors as they go about how to best treat him in this time.

In addition to caring for his son, Mohammed’s father has been a very good friend to the other Kurdish families in the hospital now and also has many Arabic-speaking friends, as he knows both Arabic and Kurdish.
Please pray for his life, as well as Mohammed’s.
Hide Comments Show Comments 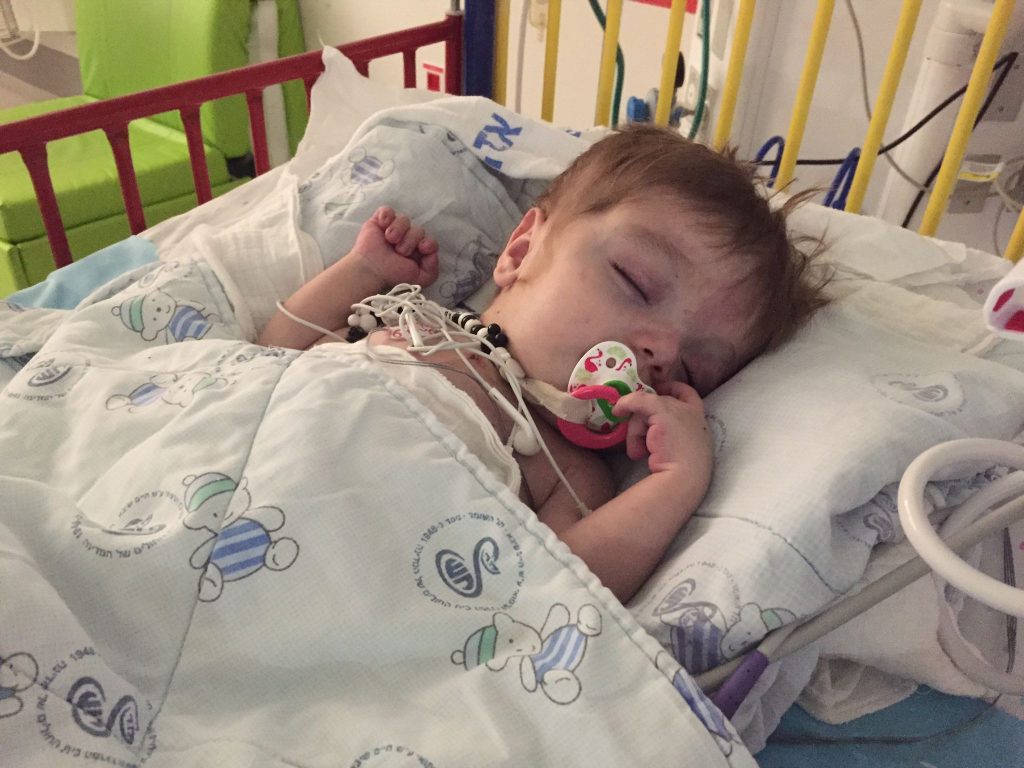 After a week of exams at Sheba hospital to find the cause of the fluid build-up in Mohammed’s stomach, there was one more, hopefully definitive test today, to confirm if he has an intestinal disorder which has been present since birth.
The doctors checked to see the condition of his heart and if that was tied to this fluid build-up, but thank God, the cardiologist could confirm this was not a complication tied to his heart function.
For many of the past days, Mohammed was not able to drink milk and this contributed to quite a difficult time for him. His father said they both went two nights without sleeping. But when co-worker Julio and I visited them today, Mohammed’s dad was happy to say that he is now able to eat again and was sleeping soundly after his meal.
Please keep Mohammed in your prayers, especially as his body seems to have a lot of complications.
–
Hide Comments Show Comments 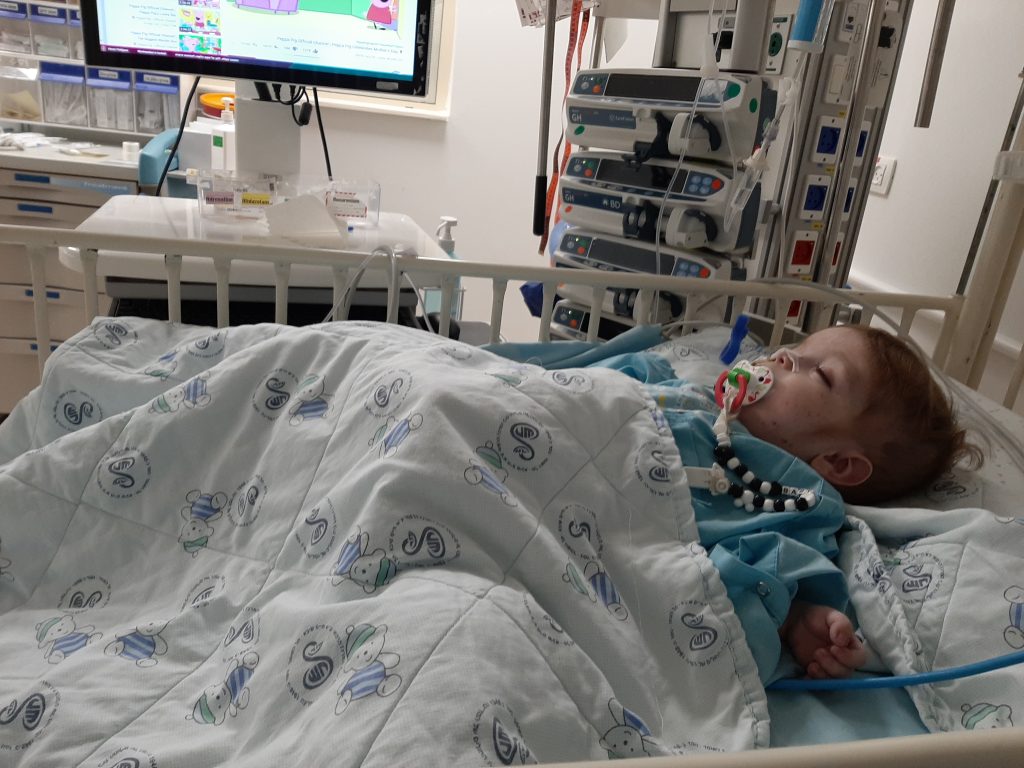 Mohammed Mosa was sleeping when I visited him at Sheba hospital earlier today, but he looked like he was sleeping peacefully. His father says that he has been drinking a little bit of milk and can have it every three hours. He is thankful for the improvement, as the milk helps calm Mohammed.
Please continue to pray for Mohammed, his family, and the doctors as they wait for the test results to determine what is causing this buildup of fluid in his abdomen.
Hide Comments Show Comments 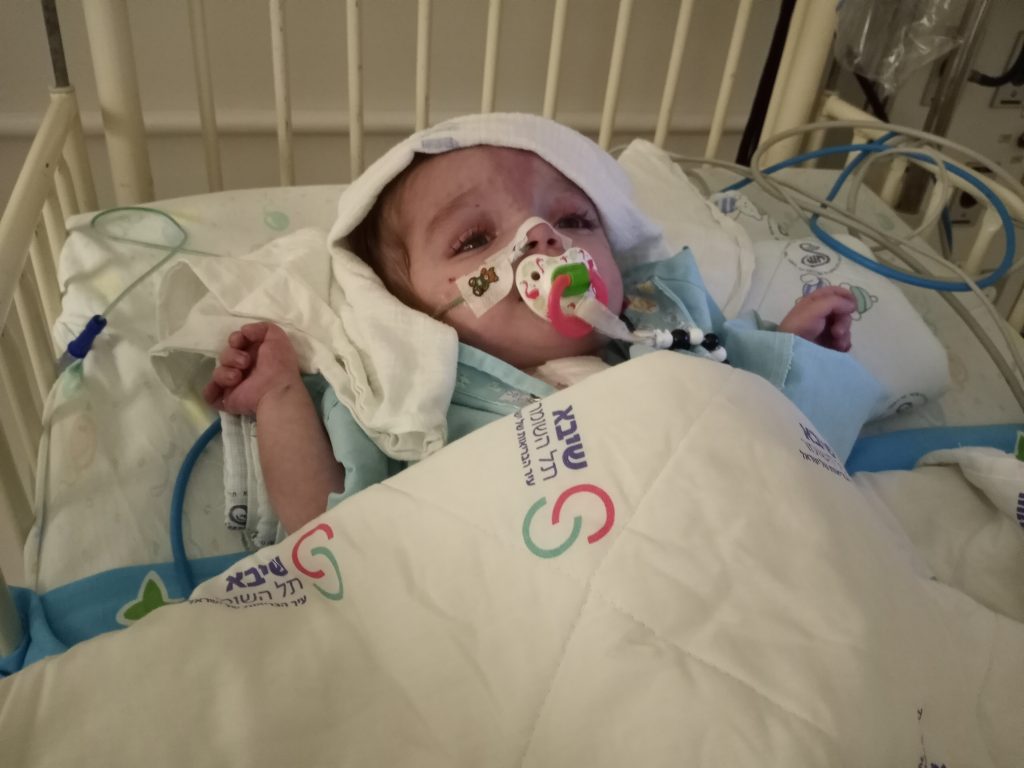 Since recovering from surgery, Mohammed has developed a a severely swollen stomach, the reason for it isn’t yet known.
He has been receiving fluids, but unable to drink milk, so please pray for him.
He was quite distressed for some time before he calmed down; he has a few toys includes bubbles that he likes and stroking his hair relaxes him. A pacifier helps calm him.
He is enduring a lot in his young life, and there is still a ways to go, so please pray for this lovely boy.
Hide Comments Show Comments 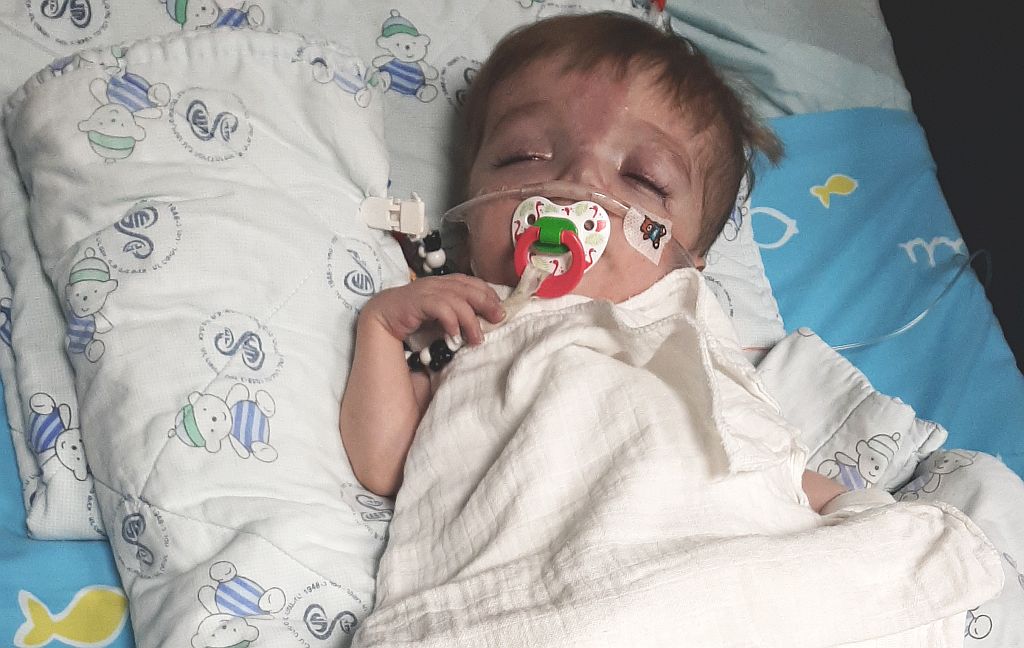 Mohammed Mosa is recovering well from his BT shunt surgery. His father was grateful to see that Mohammed’s complexion was much better.
Mohammed will require more surgeries, and his father is willing to stay for however long is needed for his son. Mohammed’s father is grateful for his son’s life, and we are grateful for Mohammed and his father.
Please pray for Mohammed as he continues to recover.
Hide Comments Show Comments 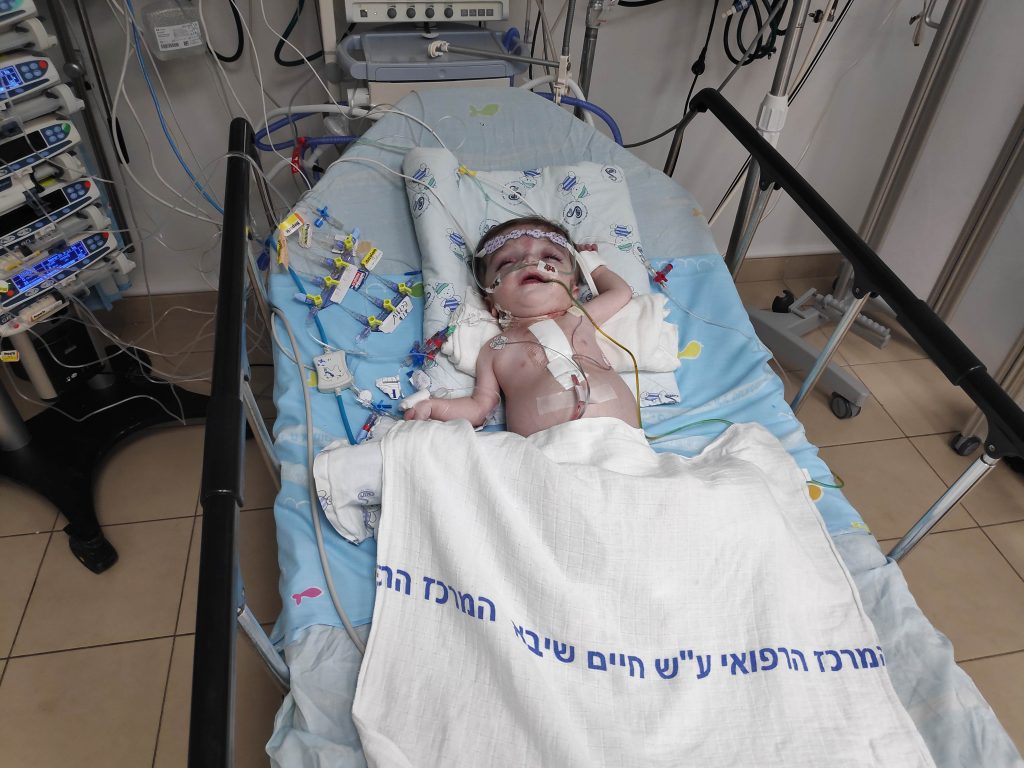 When I visited Mohammed and his father today at Sheba hospital, he was already extubated, just one day after his surgery!
I was really happy to see this progress and Mohammed’s father was as well.
Mohammed’s doctor told me that so far, he is recovering well, praise God. Please continue to pray for Mohammed and his friendly father for their time in the hospital.
Hide Comments Show Comments 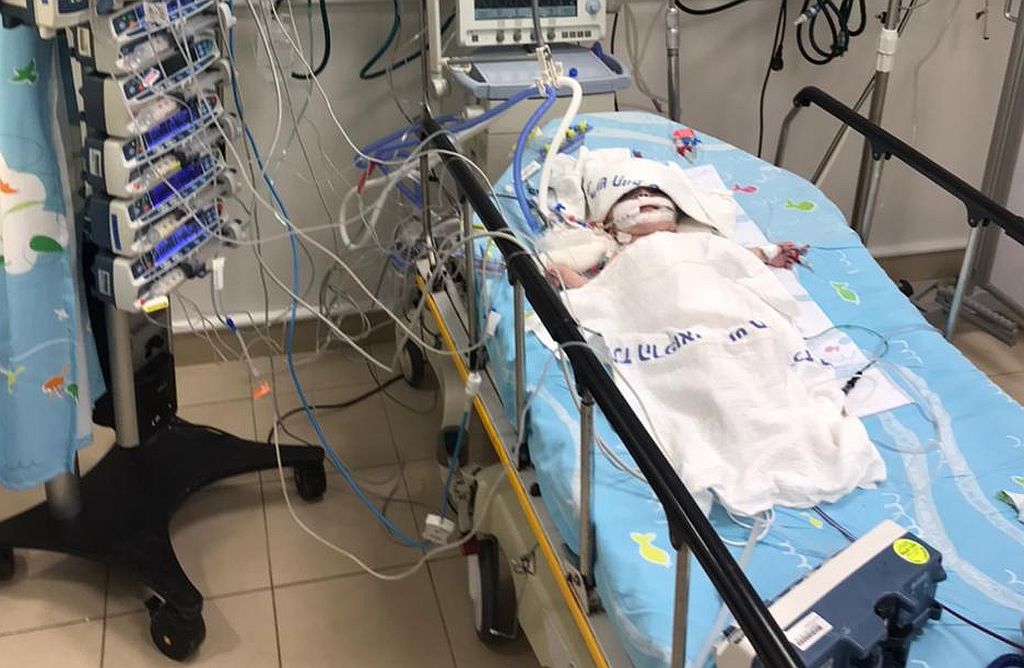 Mohammed Mosa had his very first surgery today! His father sent us photos of Mohammed and also said “Praise be to God.”
We are thankful that Mohammed was able to be operated on today, especially at his age of one year and six months. Mohammed had a surgery procedure to place a BT Shunt which will help increase the blood flow to his lungs, and help his oxygen levels increase. This is only a temporary solution, and it will help prepare him for future surgeries.
We pray that Mohammed will have a good recovery and adjust to this new circulation. We also pray for peace for his family in Kurdistan and for his kind father who is with him in Israel.
Hide Comments Show Comments 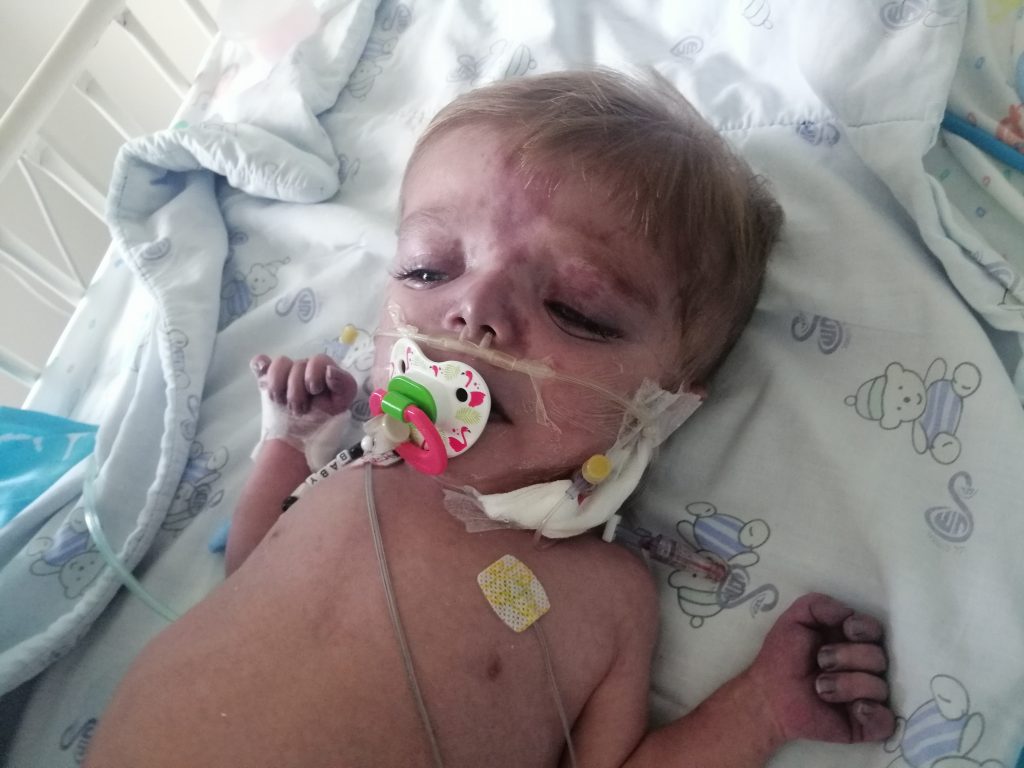 I visited Mohammed this morning, and he was not happy! His father was sleeping since he had had such a heavy few days of travelling. 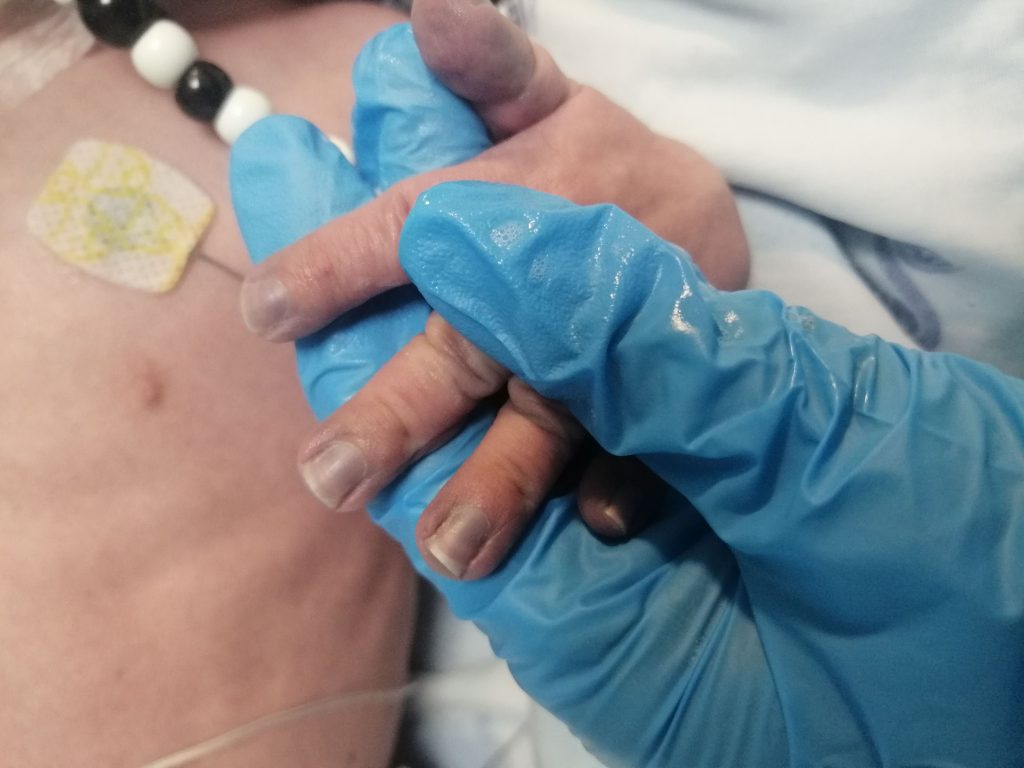 Mohammed was being prepared for a CT scan of his head and heart, which means he was fasting. A nurse and I gave him a bath, which he also did not enjoy! As he cried, the dark blue colour in his fingers and mouth became heightened. The doctor’s summary of little Mohammed today was that he is both very unwell, and very complicated.
Please pray that he will soon be able to have intervention which can save his life.
Hide Comments Show Comments 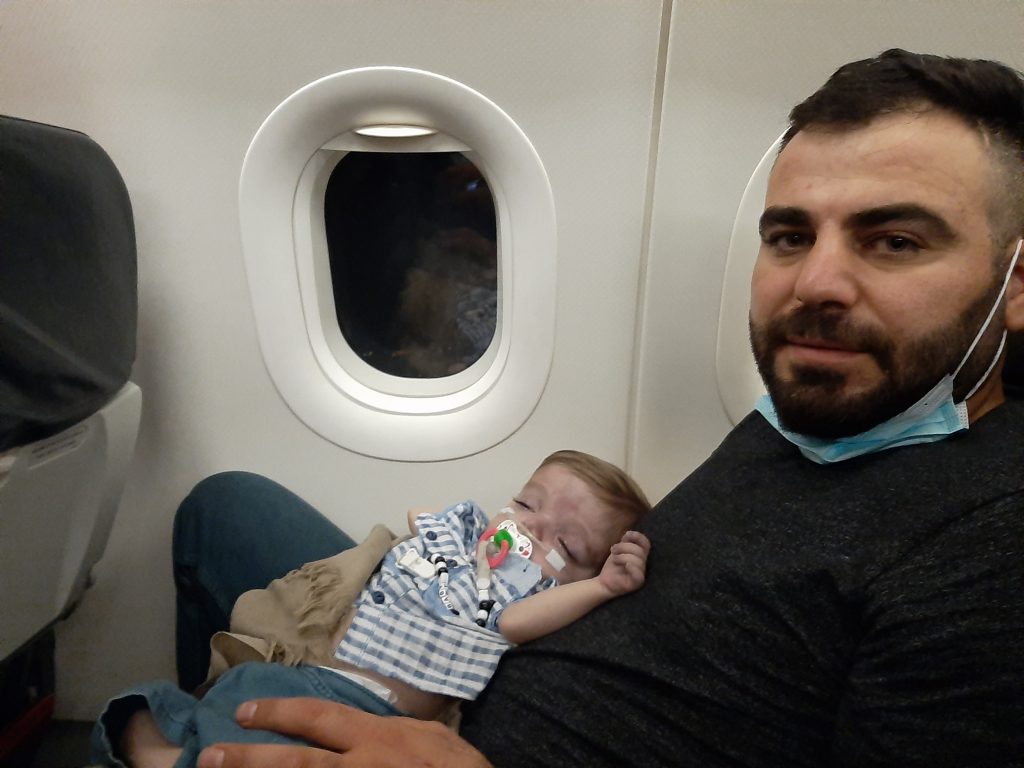 Mohammed Mosa is a one year and six month old boy from Iraqi Kurdistan. His father and Mohammed traveled to Israel yesterday, and Mohammed was immediately admitted to Sheba hospital in Israel. 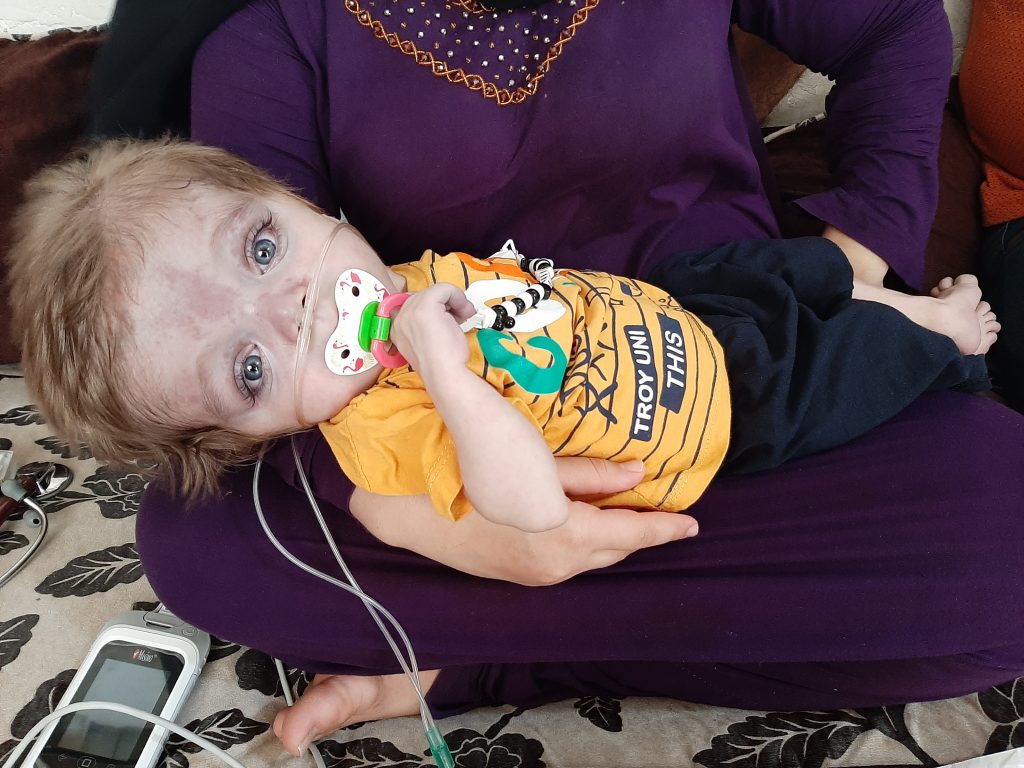 Our memories with Mohammed Mosa start with visiting his family less than two weeks ago in his home in Iraqi Kurdistan. They welcomed us into their home and his grandmother handed me Mohammed. He was crying, with his face, hands, and feet, a dark purple.

His oxygen levels were in the 40 % range without oxygen, so we asked his family to please keep him on oxygen all the time. After he was cradled in his mother’s arms with oxygen support, his oxygen levels slowly started to improve.

We sat in their home together with his family and cousins, drinking tea and exchanging stories. Mohammed’s family had to move from near Mosul to Zakho Iraqi Kurdistan due to ISIS.

At birth, Mohammed was given three months to live. However Mohammed has far surpassed this expectancy. His family has hope for him in Israel. 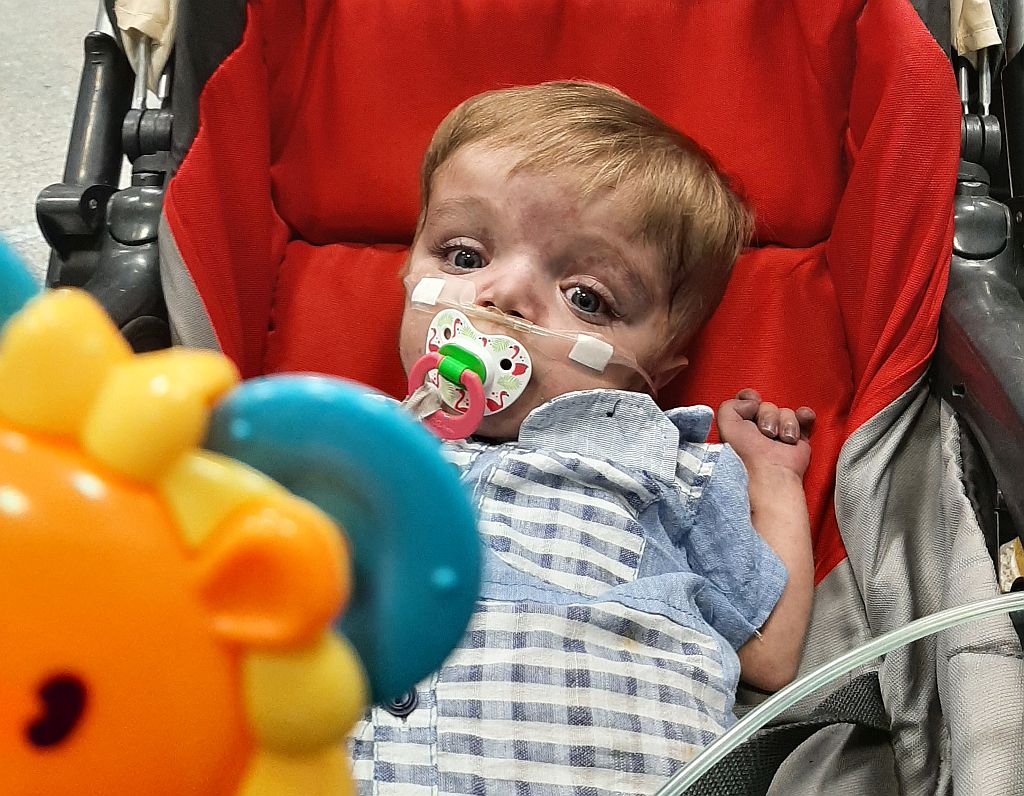 With our portable oxygen concentrator, we took Mohammed to an echo and to get a corona test in Kurdistan, as well as get to know his family more. The local cardiologist reiterated the severity of his heart condition and wished us safe travels as we left. Mohammed was diagnosed with a heart condition called Double Outlet Right Ventricle. His heart is even on the other side of his little body. 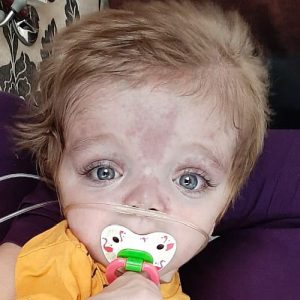 As of right now, Mohammed M still needs $9800 toward surgery and related expenses.