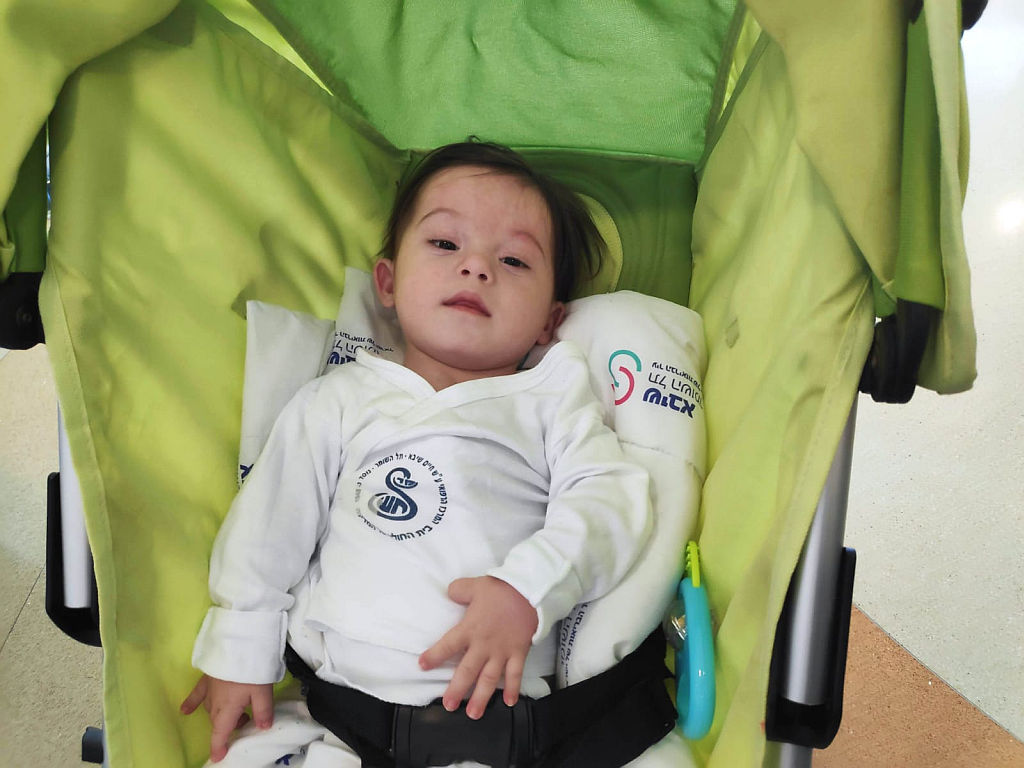 Today Ahmed went with coworkers Julio, Sabrina, and Joanne to the hospital for his first post operative echo. Julio was able to translate for the mothers a few concerns the doctor had based on the exam today. 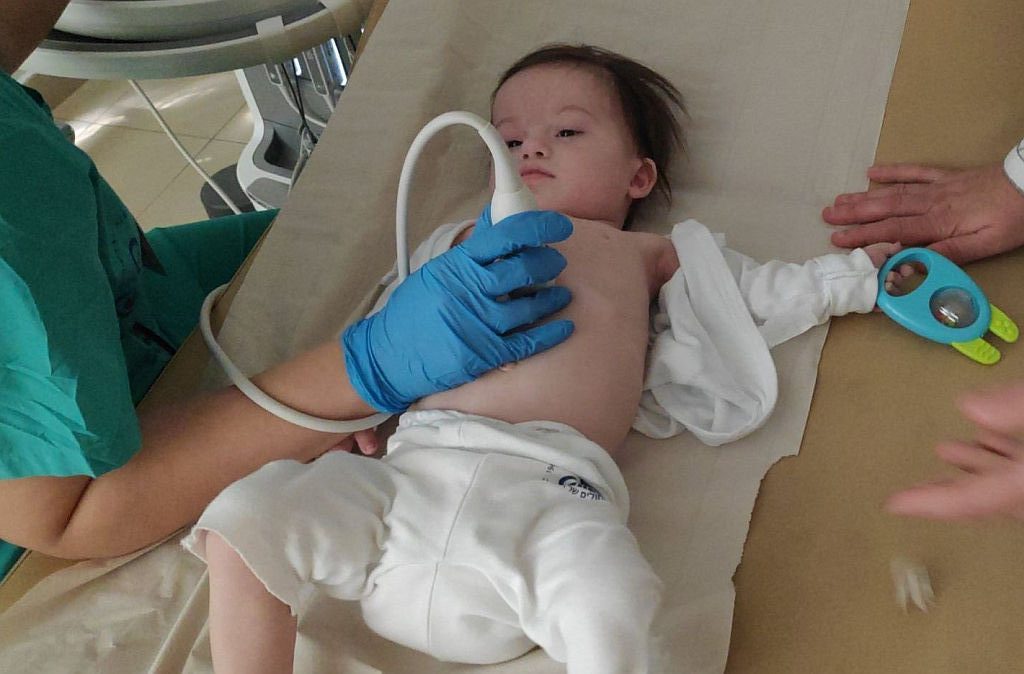 Because Ahmed was older when he had his heart surgery his pulmonary pressure is somewhat higher, and in addition to this they would like more time to see how his heart is doing in two to three weeks. But they are hopeful that he will not require another surgery now, he just needs to be monitored.

Please be praying for lovely Ahmed in this time. 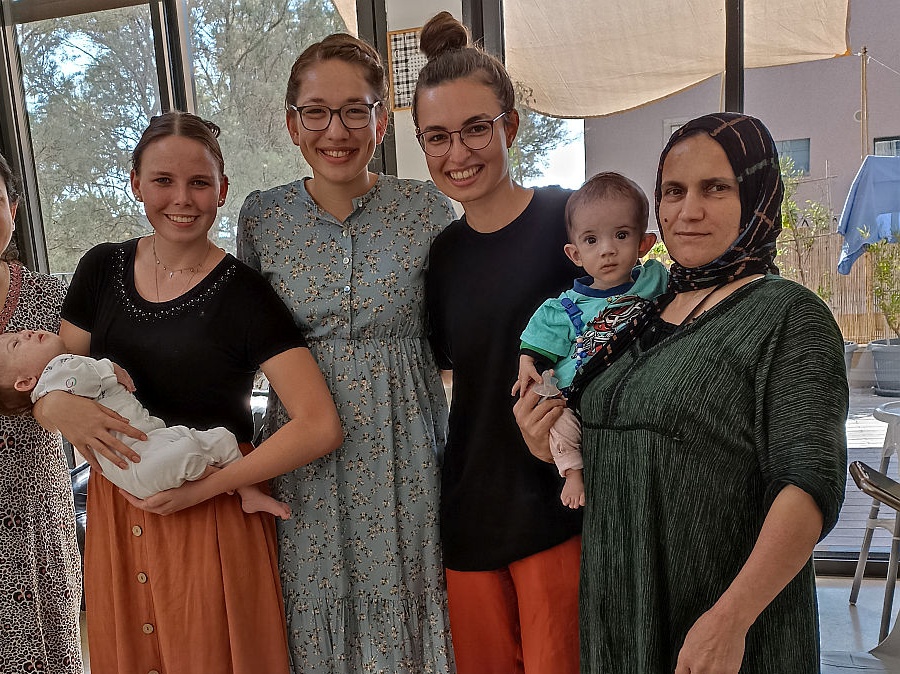 Shortly after Ahmed and his mother where discharged from Sheba hospital to our community home in Jaffa last week, we celebrated his first birthday together. We are all very happy that Ahmed didn’t have to celebrate his birthday in the hospital. 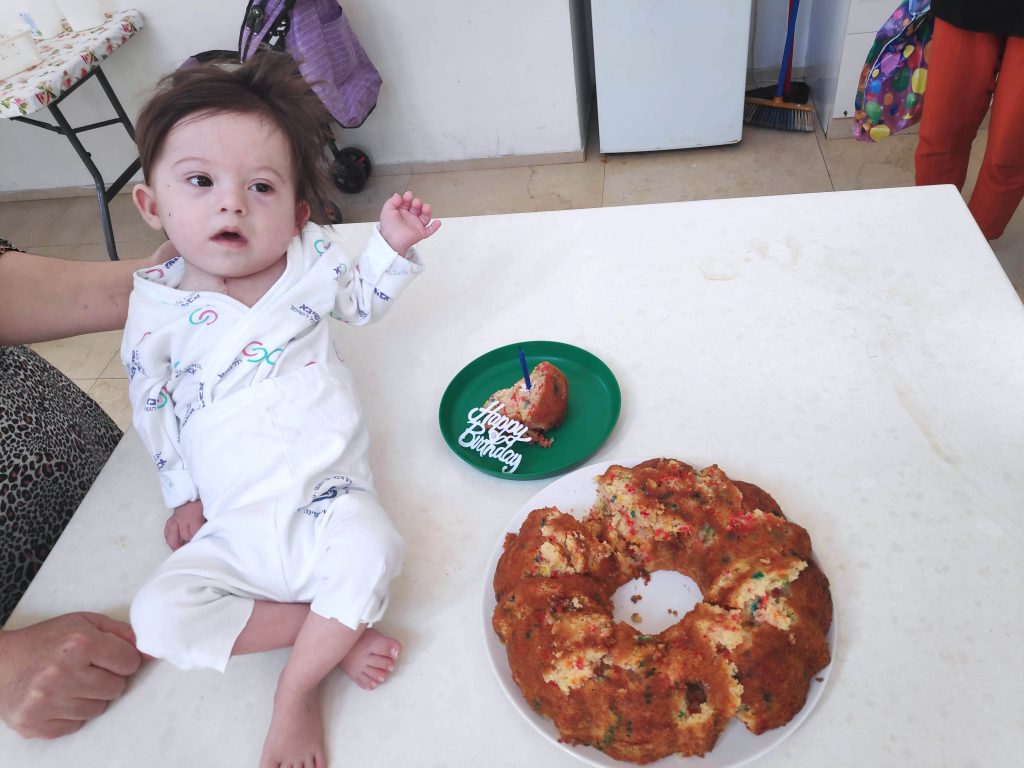 Co-workers Bria and Joanne made a really nice cake for him which we all ate together. They choose some nice clothes and a toy for him as his birthday present.
Ahmed’s mother was very happy and thankful about this attention and effort and had everyone gather together for nice picture-taking and to eat a piece of cake. 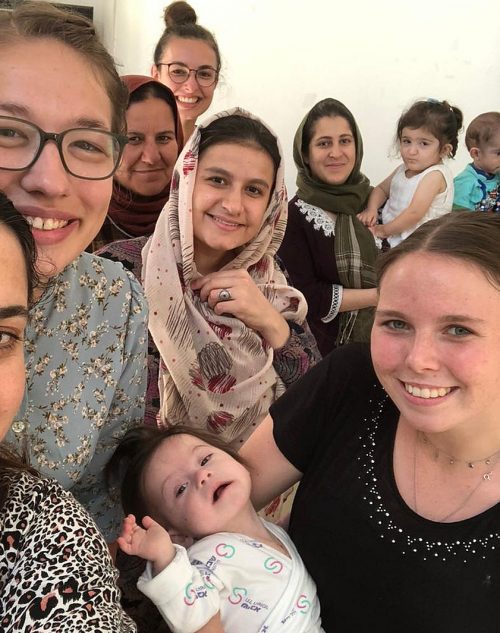 I hope that even though they couldn’t celebrate his first birthday back home in Kurdistan, they still enjoyed their day together with all the other lovely families in their temporary Jaffa home. 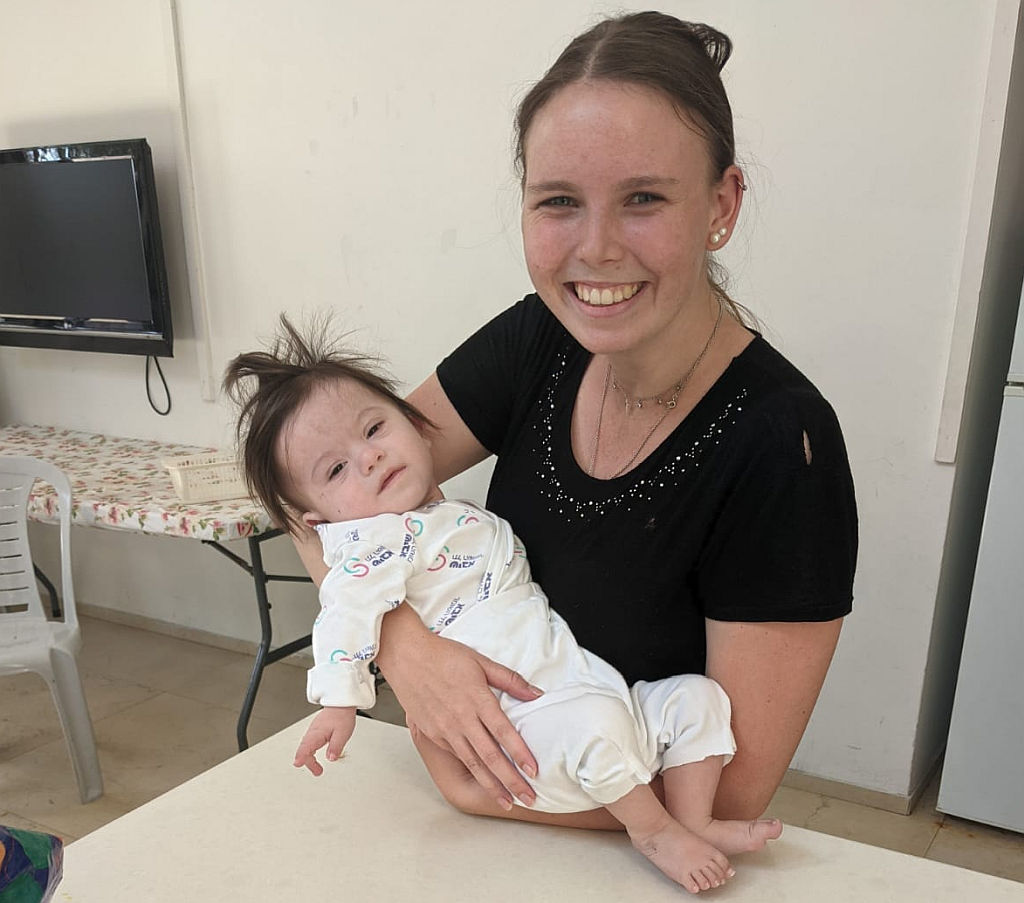 I think it’s really nice that none of these folks are going through their difficult times alone, but with each other. Let’s pray for a blessed coming year for our dear Ahmed.
Hide Comments Show Comments 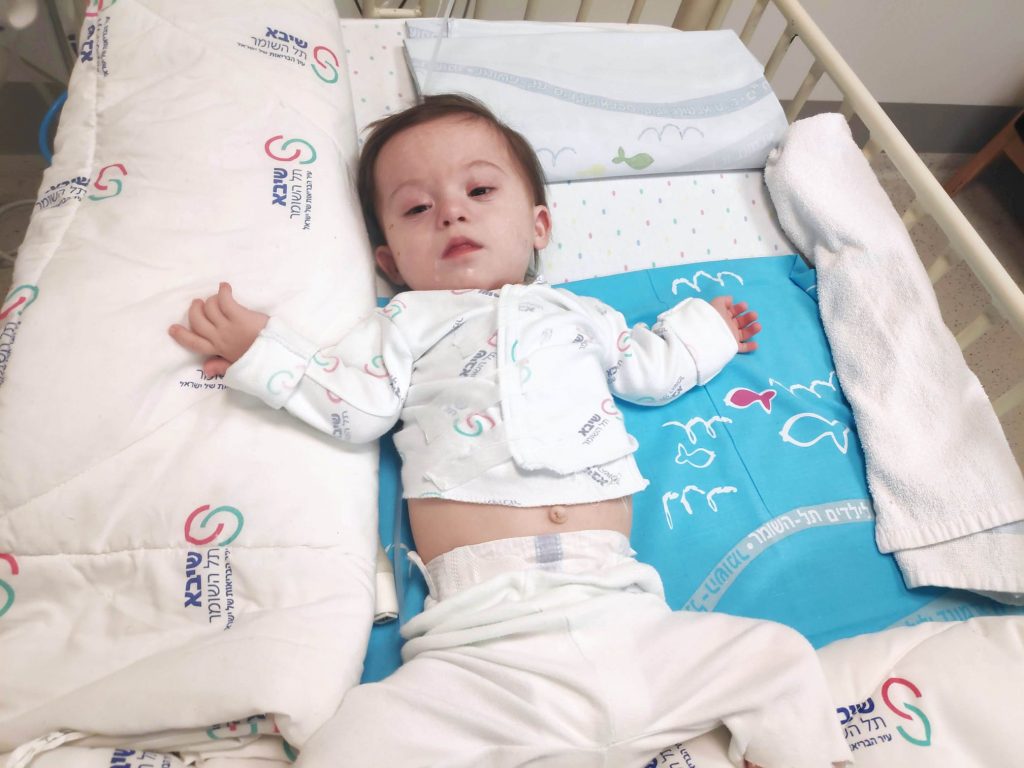 Ahmed had a T.E.E (transesophageal echo) at Sheba hospital today to get a better look at the location of a VSD near to his aortic valve. After the test, the doctors discharged Ahmed as he is in a very good condition and will return next week for a follow-up to monitor the residual hole, which we hope will close on its own without further intervention. 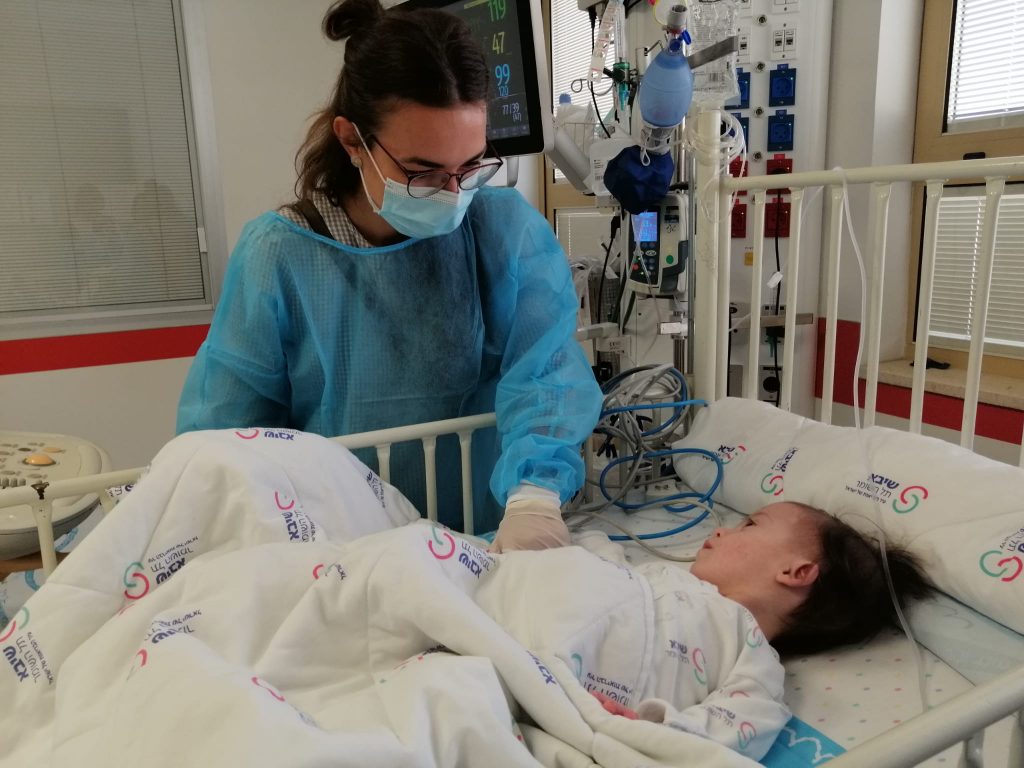 Ahmed’s mother has been really wonderful in every circumstance during her time in the hospital. I really thank God for Ahmed because he was discharged eight days after his operation, which is quite a quick recovery. Thank God for the hands of the doctors and nurses who treated him at Sheba hospital with the utmost care. 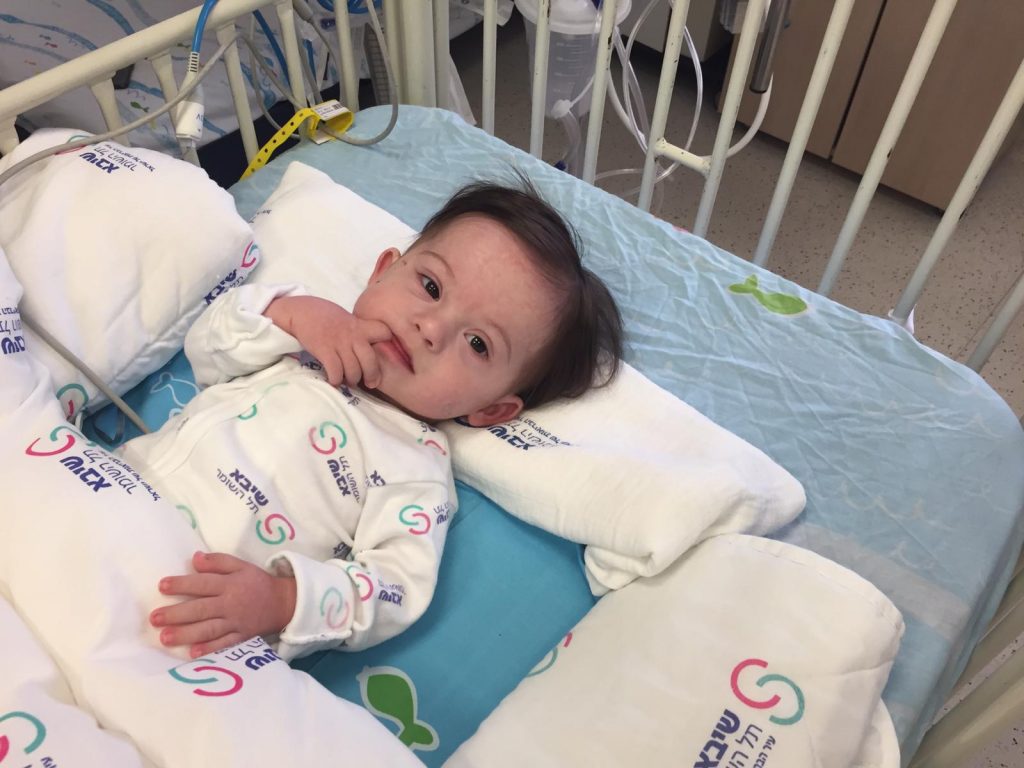 Beautiful Ahmed is doing very well. He was almost discharged today from Sheba hospital, but the cardiologist decided to perform a trans-esophageal echo tomorrow to check the proximity of a hole which is near to his aortic valve.

His mum is very willing to do anything for her boy, and isn’t phased at all about the small procedure tomorrow.

Please keep this little one in your prayers. 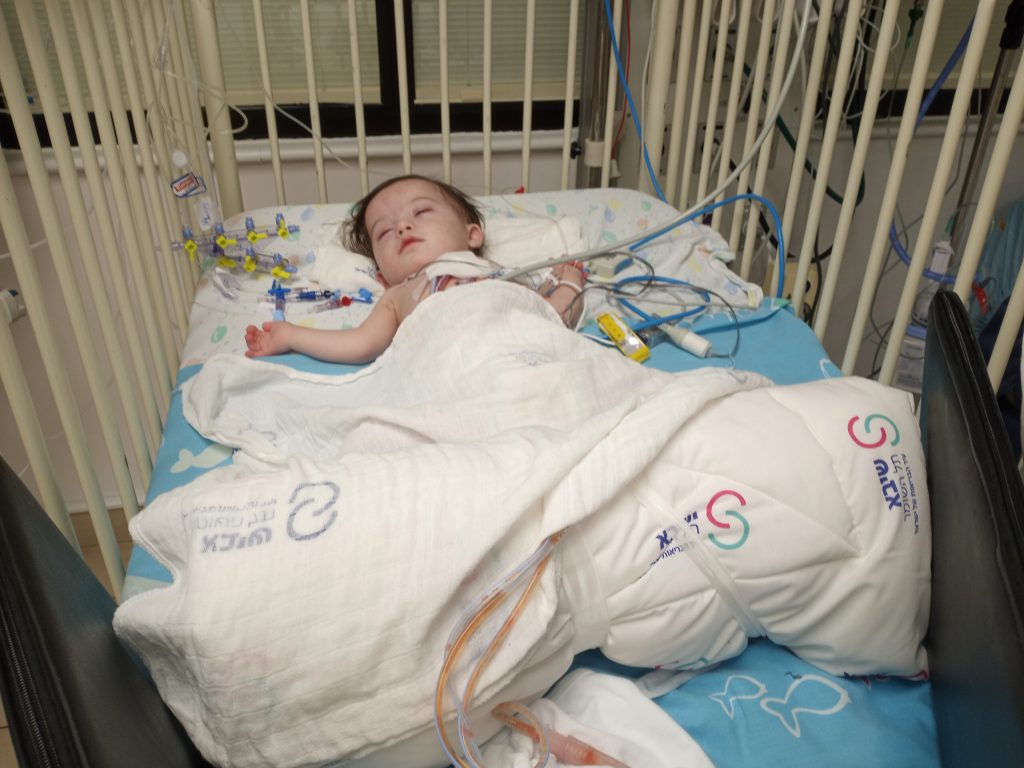 It was so good to visit Ahmed and his mother at Sheba hospital today. Since his surgery, Ahmed has been extubated. His mother was quick to point out the monitor which showed his oxygen at 98%.
Everyday, he has been having echocardiograms.

The doctor said today that these show good heart function. His mother is always a joy to be around and we are so happy for the progress of lovely Ahmed. 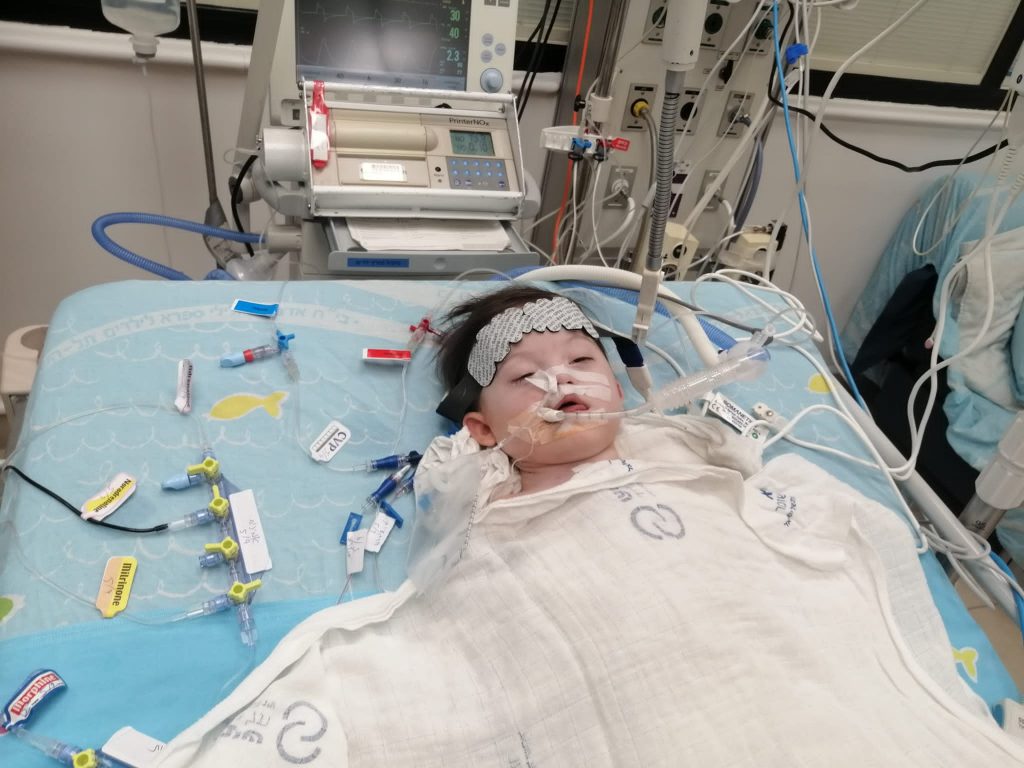 Today Ahmed had his surgery and came out of it successfully. Doctors closed all the holes in his heart (VSD and ASD) and placed two valves that are working well. 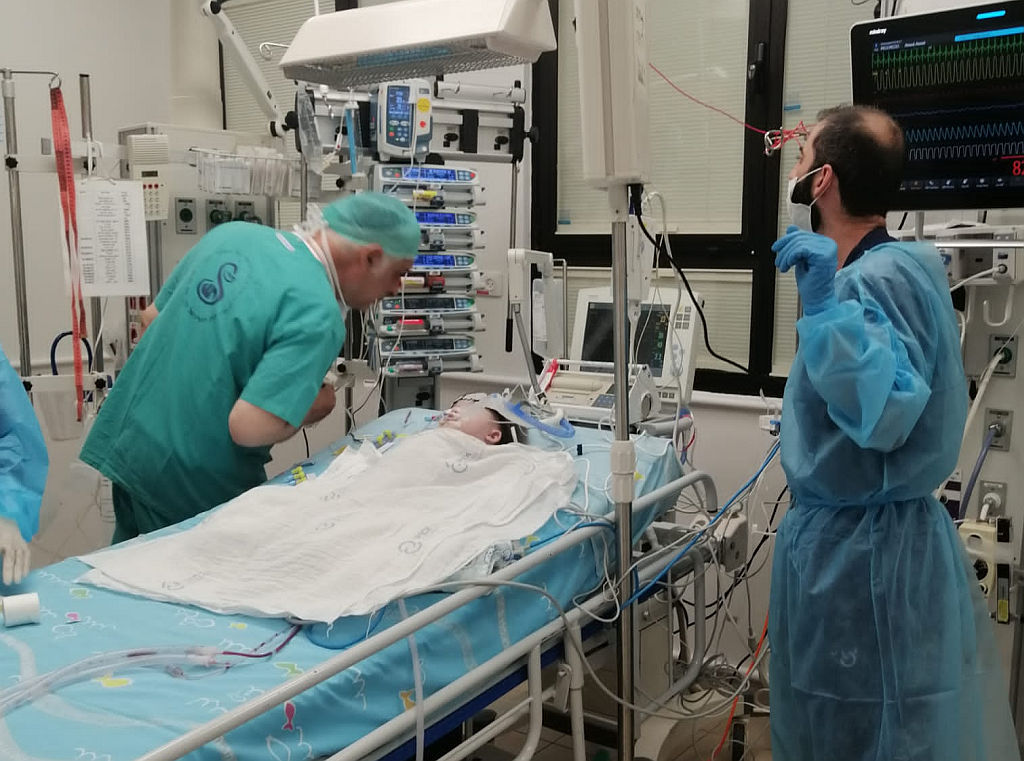 They detected no pulmonary hypertension, which made the doctors feel optimistic for Ahmed’s recovery. 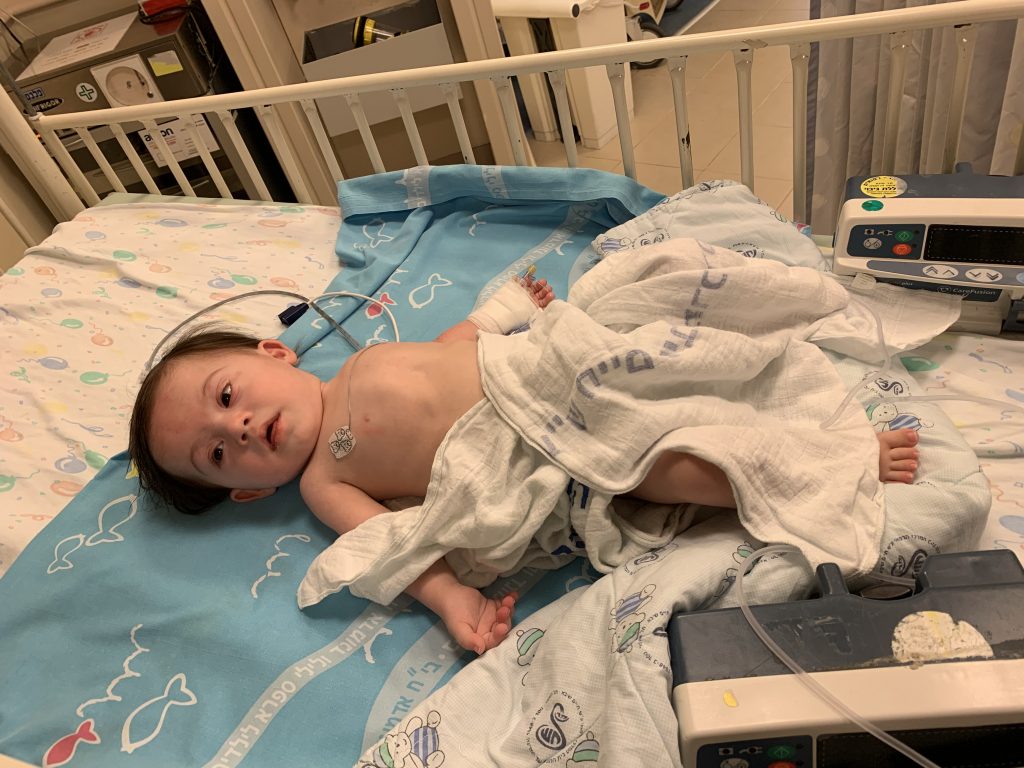 Prior to surgery, Ahmed was very calm, although he was fasting for a long time. An echocardiogram preceded Ahmed’s surgery. Ahmed’s mother held him until the doctor took him to the surgery room. She cried only a bit and you could see that she was worried for Ahmed, but on the other hand, was also looking forward to having the surgery completed for her son. 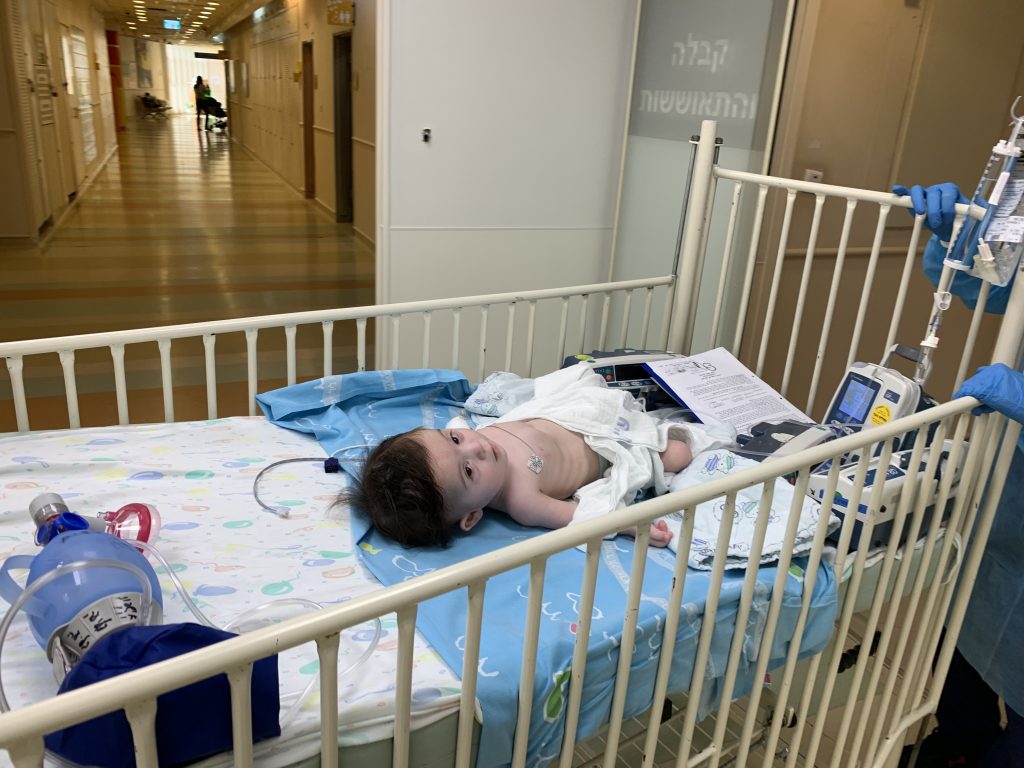 While we waited, I experienced once again how valuable it is for our Kurdish mothers to know each other in the hospital. Ahmed’s mother had the opportunity to talk to another mother who’s child was in the same situation as Ahmed just a few days before. It also felt good just to sit and be with Ahmed’s mother myself. She showed me pictures of her family and we called Ahmed‘s uncle who speaks English.

We’re thankful for this good surgery outcome today. Please continue to pray for Ahmed and his mother. 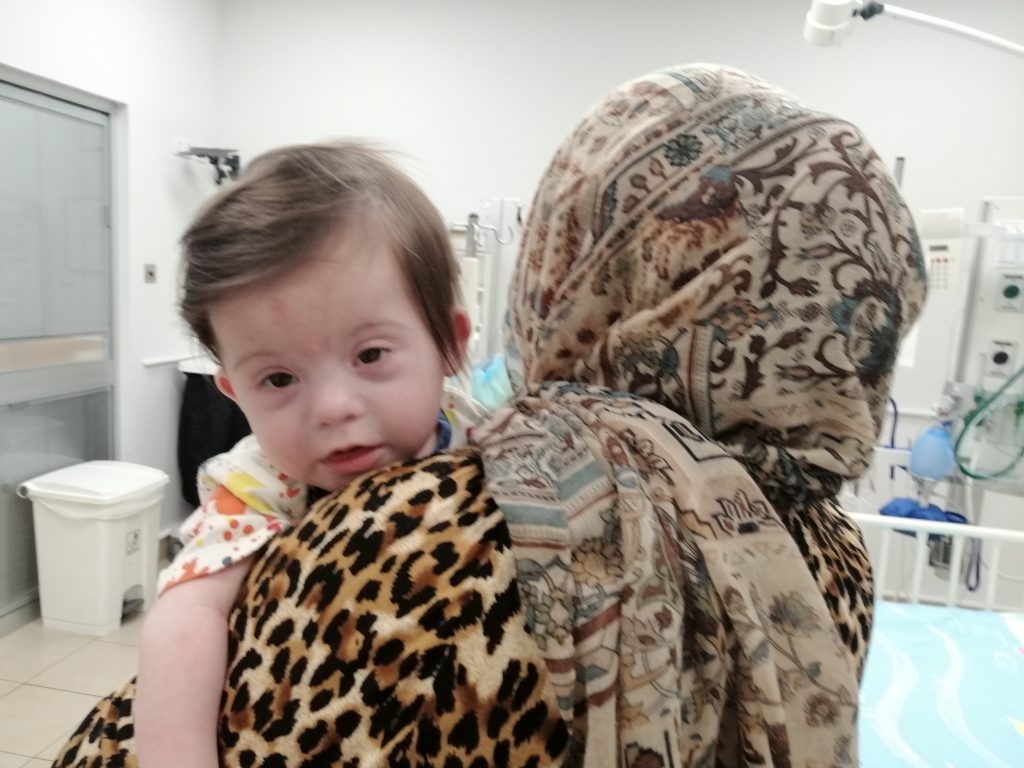 Little Ahmed has been admitted to Sheba hospital this evening. He is due to have surgery tomorrow morning.
He was by many warm and welcoming doctors and nurses this evening, although he wasn’t too keen on anything which involved him being outside of his mother’s arms. 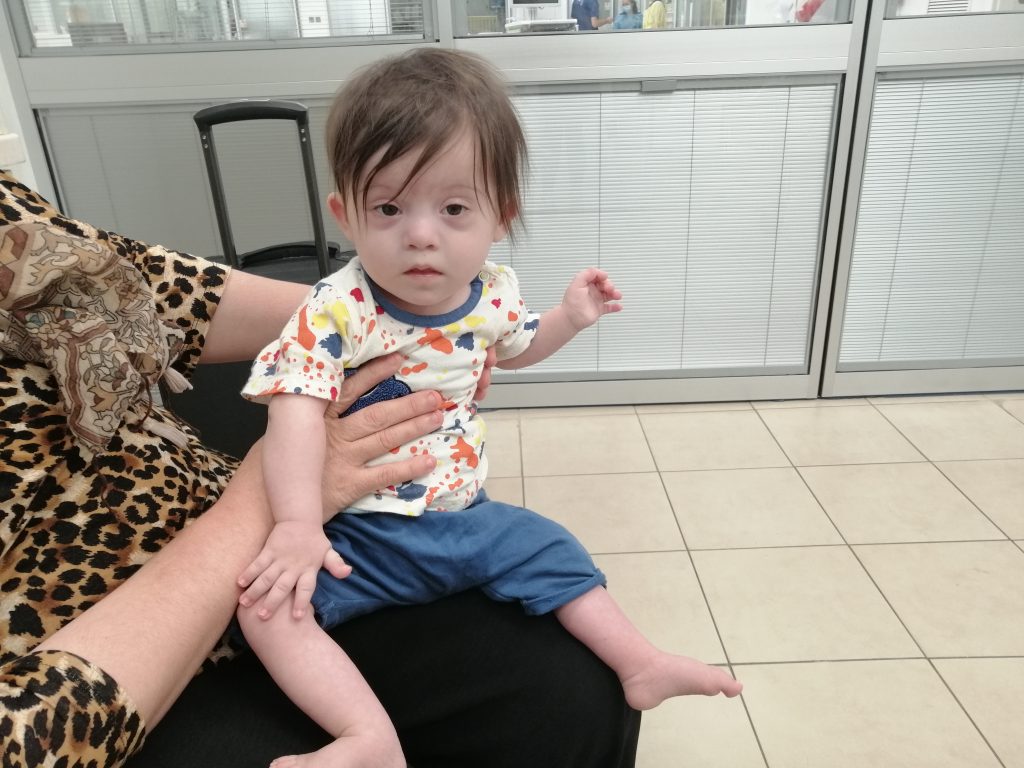 Please pray for Ahmed and his sweetly strong mother. We look forward to joining her again tomorrow morning so that she will not be waiting alone during Ahmed’s surgery.
Hide Comments Show Comments 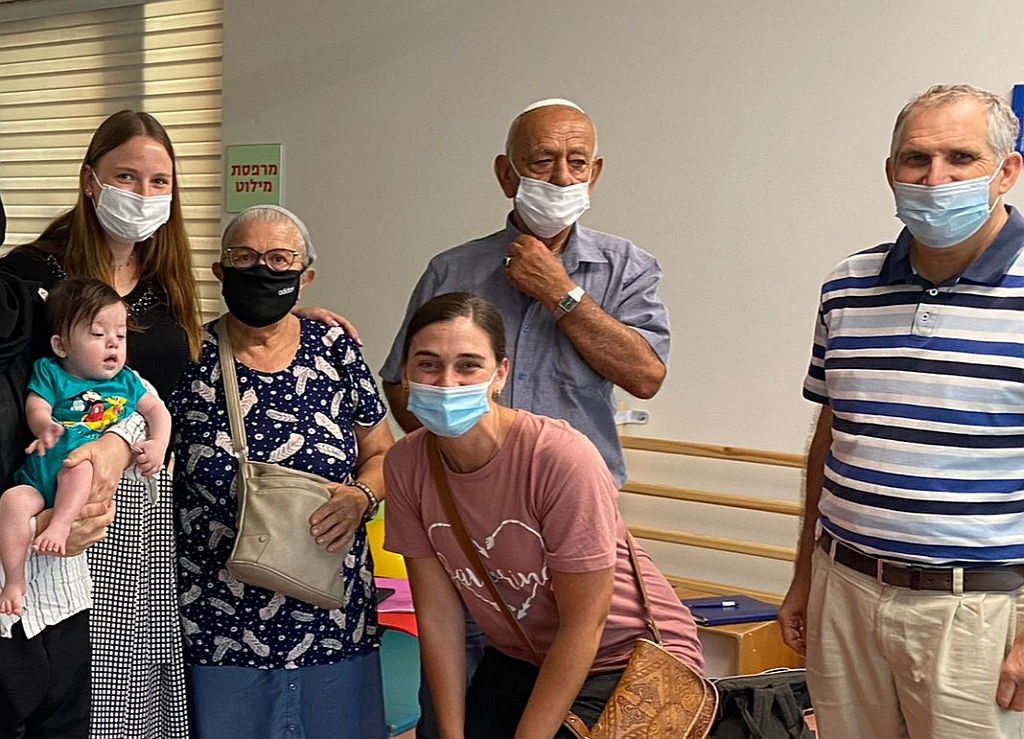 Today I went with Ahmed and his mother to Jerusalem for a physio-therapy appointment at a center. Ahmed slept the whole way there.
When we arrived at the Center for the Treatment of Autism, we found our dear friend Sukit already waiting for us with a couple from Kurdistan who helped with translation for the physio-therapist and Ahmed’s mother today. The whole staff has been extremely friendly and helpful to Ahmed’s mother, making sure that she understood everything that they were trying to tell her. 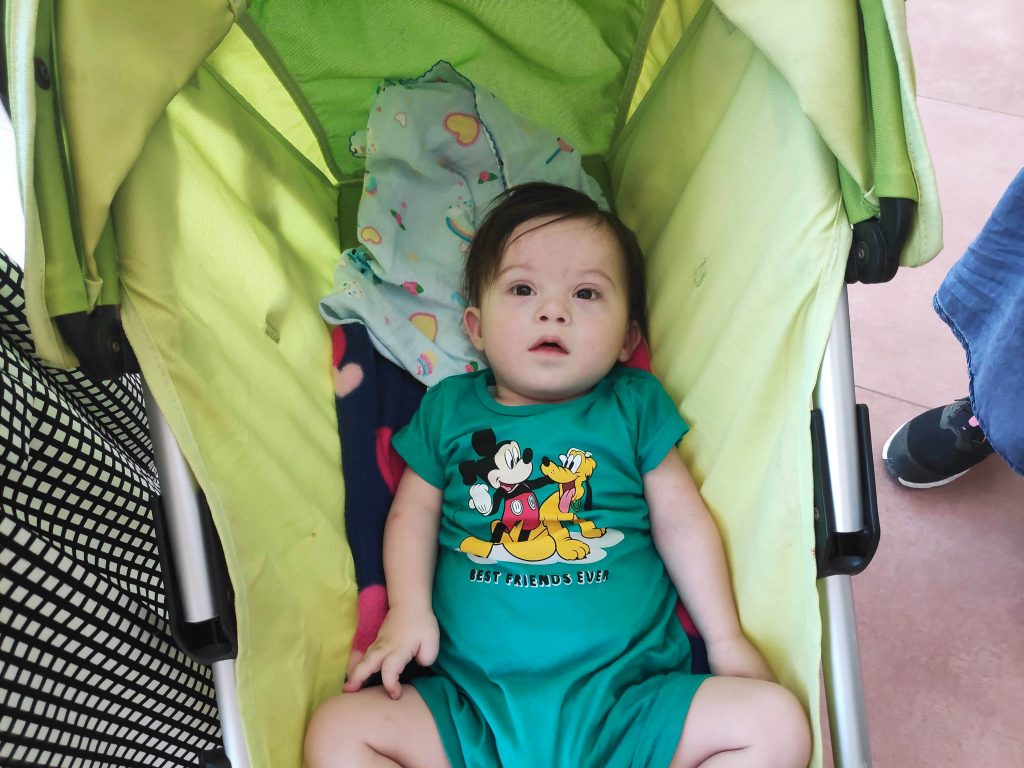 It was really nice to witness once again that the Israeli doctors treat Ahmed’s mother who is Muslim, with the same kindness and respect that they would treat a Jewish mother. It was beautiful to experience that and to know that God loves everyone equally. 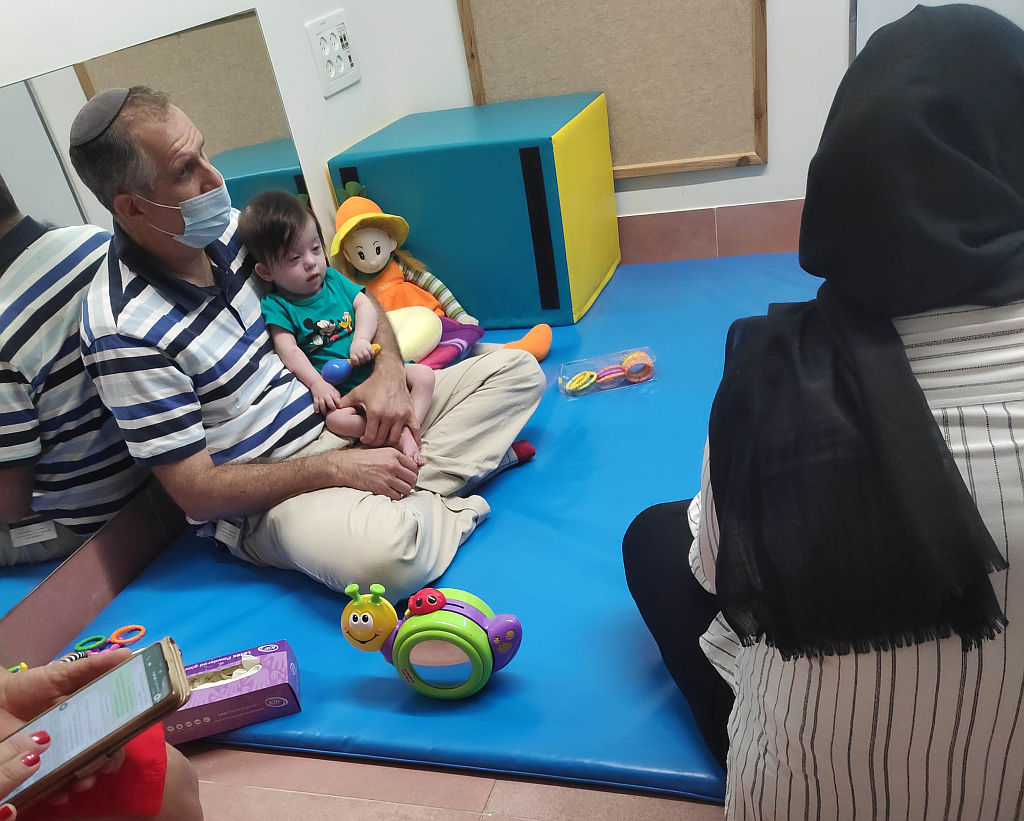 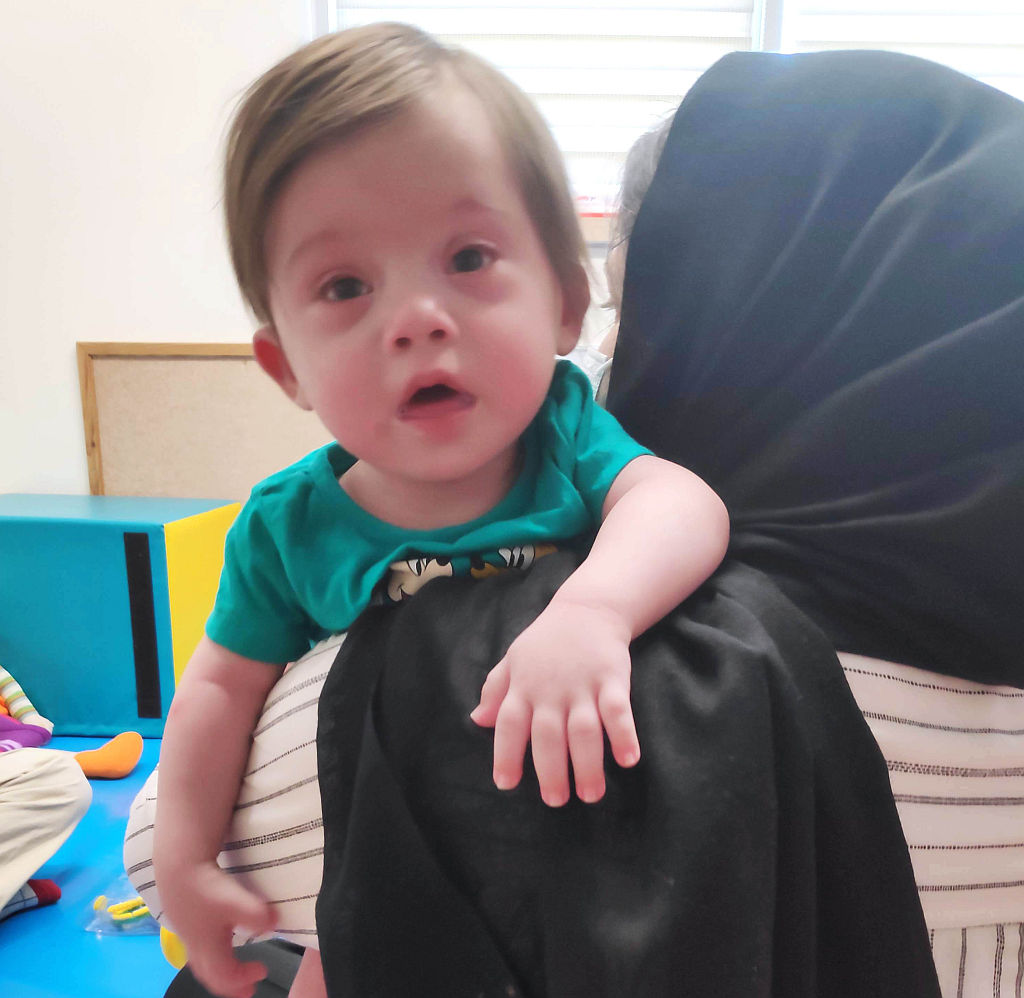 He didn’t like his exercises, but he has to do them. Ahmed’s mother was wonderful, dealing really well with this situation which was completely new for her.  She thanked the staff there over and over again, even in English.
Ahmed is supposed to have his physio therapy on more occasions now, but they have to discuss the scheduling of this, and keep in contact with us about it. Ahmed’s mother has videos of the physio-therapy today, as she is supposed to do these exercises with Ahmed.
Please pray that she has the strength and wisdom to complete the therapy with Ahmed, as she has to apply what she’s learned and it is new for this lovely woman.
Hide Comments Show Comments 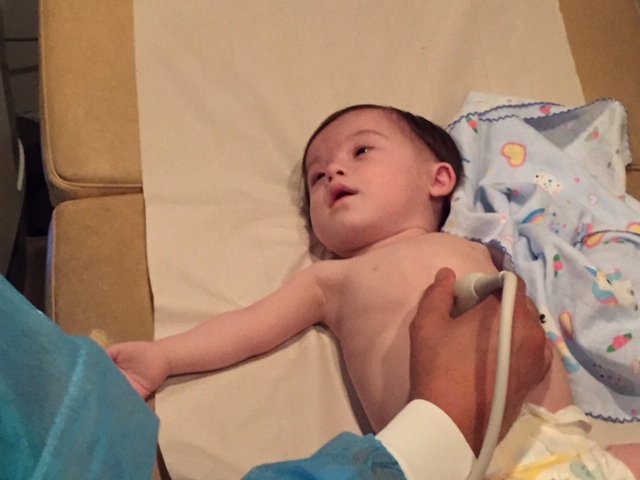 Today we had the first echo assessment for a new little one named Ahmed. He is a seven month old baby with Downs Syndrome from Kurdistan. He is the youngest of seven children. He is a very quiet boy and his mother is very kind. 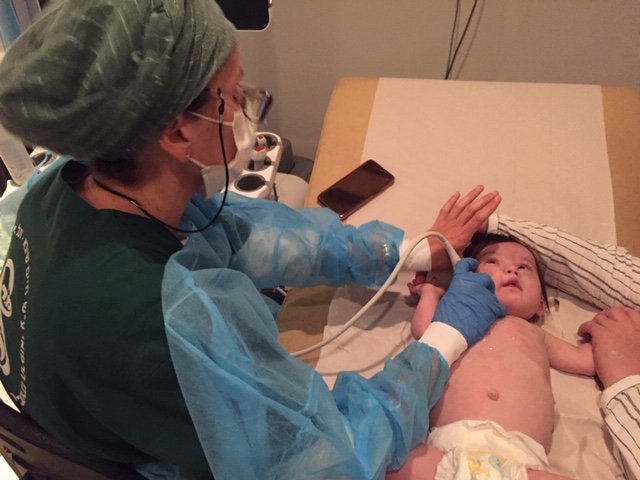 His echo took about one and a half hours, with two Cardiologists and different technicians taking many assessment images to get a good picture of his heart. I encouraged the mother with the explanation that the doctors are taking their time to carefully do their best for Ahmed, and know exactly what he has. 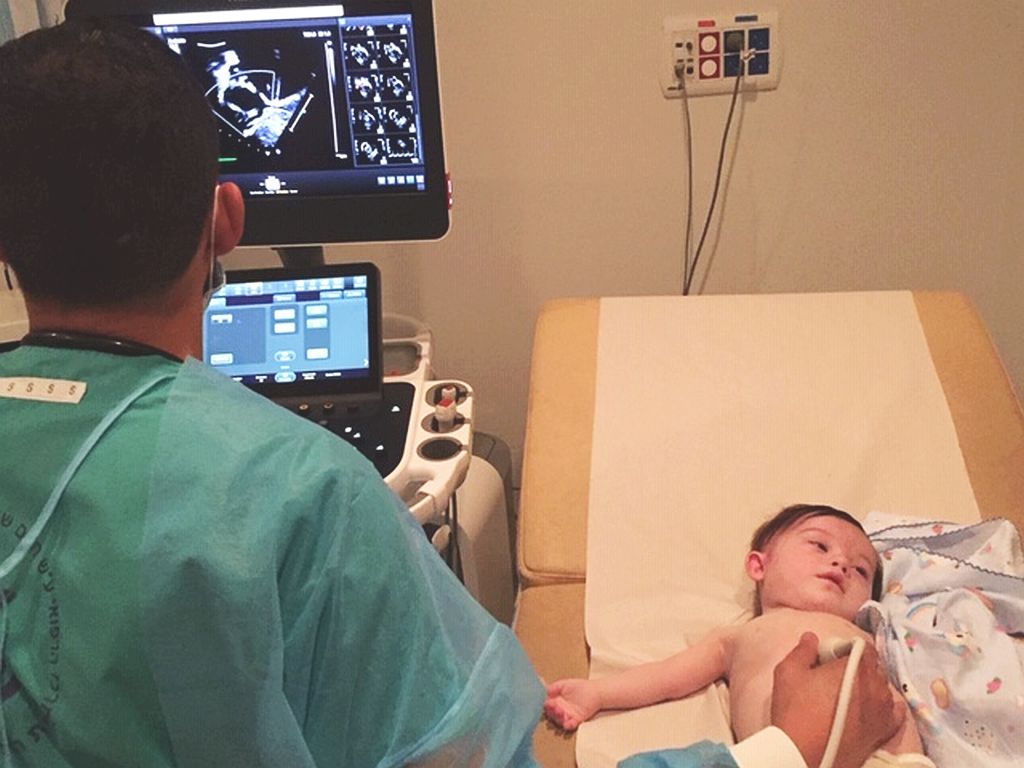 It was a very beautiful moment to see an Israeli Arab doctor with an Israeli Jewish doctor, being assisted by a Russian Israeli technician, all in the same room, all performing the echo for this Kurdish boy. 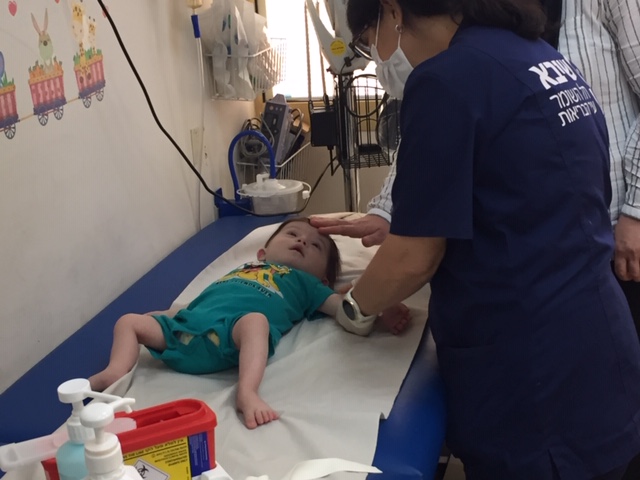 Finally we got out and performed the rest of the tests which included a blood test, an x-ray and an ECG. The cardiologists decided that they prefer to do an additional CT scan in the next few days.

The mother of Ahmed was very patient all the time. She happily met up with several other Kurdish mothers during her time in the hospital. 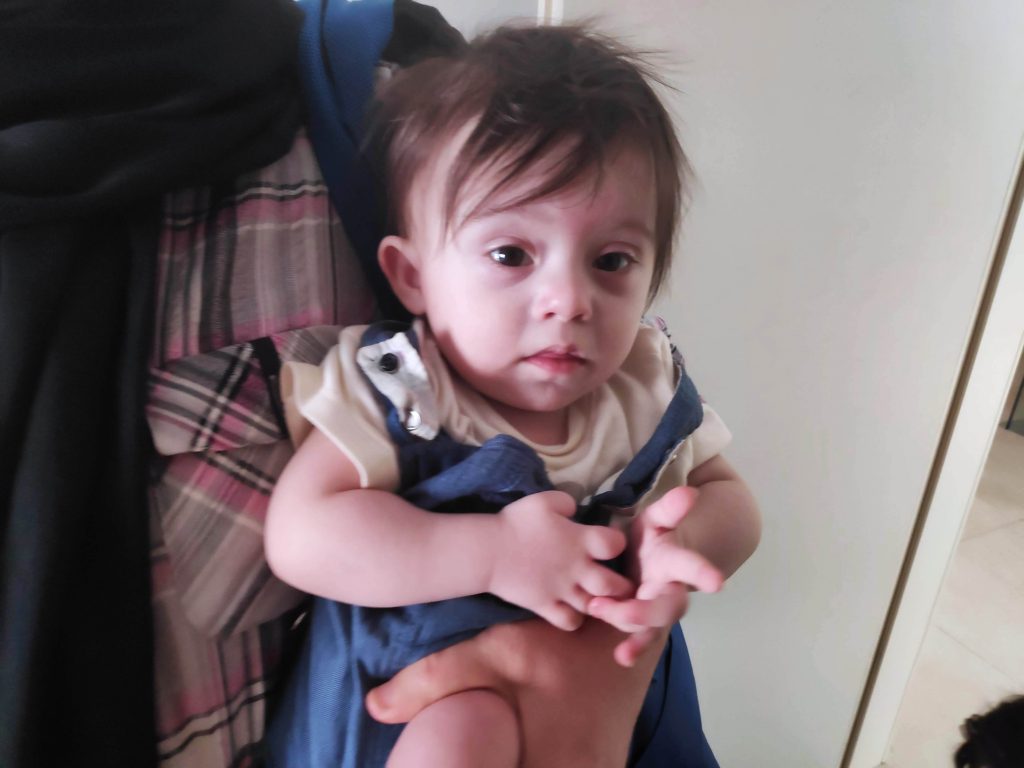 Little Ahmed and his mother arrived today at Ben Gurion Airport after travelling in the night from Kurdistan, Northern Iraq, together with two other families. They were given a medical escort by our co-workers Colin and Nate.
Thank God we found each other easily at the airport. We brought them to our community home in Jaffa to rest up and catch their breath.
Ahmed is diagnosed with AV canal and he is having his first appointment at Sheba on Thursday. He and his lovely mother have to quarantine for the next two weeks in our community home.
Please pray for them to settle in easily and to become accustomed to their new surroundings quickly.
Hide Comments Show Comments 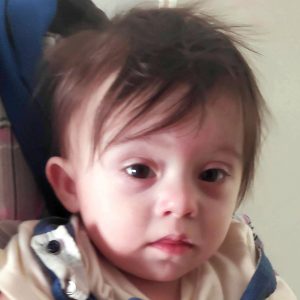 As of right now, Ahmed T still needs $0 toward surgery and related expenses.